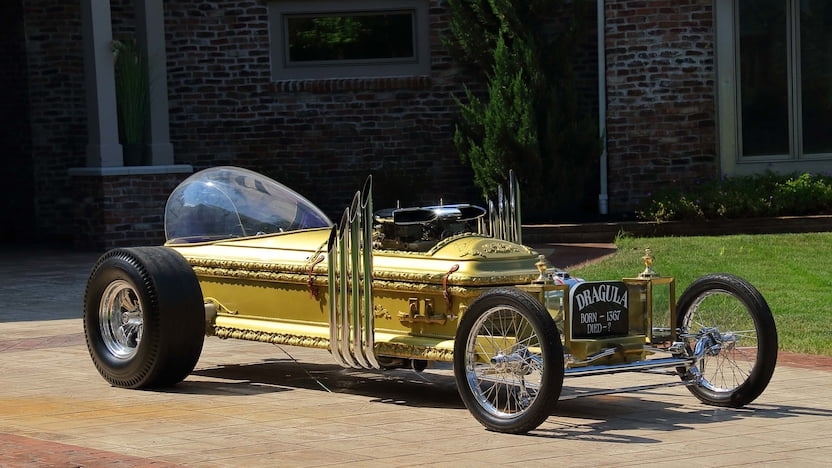 The 1964 Dragula Munsters Coffin Dragster was designed by George Barris for Barris Kustoms. The vehicle was built by George Barris and Dick Dean for the May 1965 episode of the ‘Munsters’ titled ‘Hot Rod Herman’.

The body of the Dragula was built from a coffin bought from a funeral home in North Hollywood California even though it was illegal. Dragula was limited to only five authentic units and this is the final dragster built.

The vehicle was equipped with a 289/350 HP-V8 engine with a 3 speed manual transmission. The coffin body has been finished in Gold and rides on a chassis fitted with Radir alloy wheel wrapped in Radir Dragster rear slicks out backs and Duro bicycle tires with chrome spoke wheels up front.

Additionally, the exterior of the Dragula features lantern headlights, pipe organ exhaust pipes, big dual intake snorkel on the engine and a clear canopy over the cockpit. The interior features purple-periwinkle upholstery in a web design covering the seat position.

The vehicle also comes with a letter of Authenticity and Certificate of Authenticity from Barris Kustoms. It will be sold at the Mecum Kissimmee auctions in January 2022.