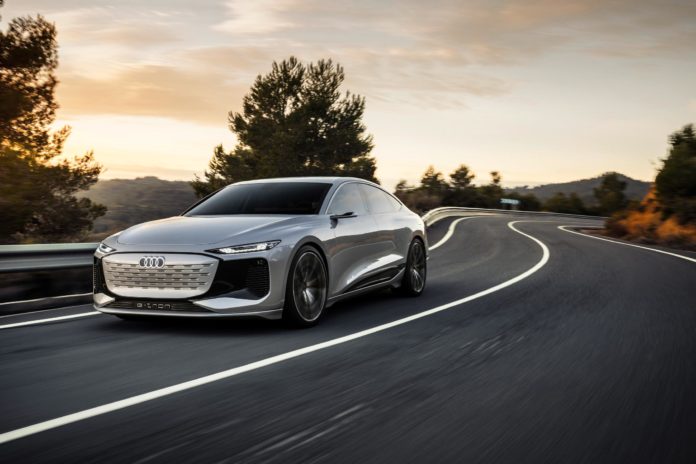 Audi unveiled a new full-electric Audi A6 e-tron concept at the Shanghai Auto show 2021. The Premium Platform Electric (PPE) will serve as a technology platform for electric vehicles, and is directly a preview to the upcoming full electric Audi A6 model.

The new Audi A6 e-tron concept fully relies on electric power and represents a completely new design concept. The only similarity the concept car has with the current A6 are the dimensions 4.96 metres long, 1.96 metre wide and 1.44 metres in height designed as a sportback.

The A6 e-tron consists of an 800 volt charging technology that ensures the battery can be charged up to 270kW at any fast charging station in a very short time. Charging the battery to a level sufficient to power the car for 300km takes only 10 minutes and charging from 5% to 80% takes 25 minutes only.

The A6 e-tron concept features a cW value of 0.22 which is unmatched in the electrified C-segment and therefore means the car exhibits minimal aerodynamic drag that initially changes into lower energy consumption hence extends the range.

The vehicle appears monolithic when viewed from the side as if built from a single mould as a result of the absence of hard edges between convex and concave all around the body whereas the large 22 inches wheels and short overhangs, wide coupe roof arch and the flat cabin implicates the proportions of a sports car.

The exterior of the vehicle features flat headlight and taillights that adapt to weather, traffic, surrounding as well as communicate with other road users. The Digital LED and OLED offer maximum brightness and three high-resolution LED projectors that display warning symbols. The tail lights feature new three-dimensional OLED elements that make it possible to experience dynamic light show in 3D spatial effect.

In addition, the exterior also features quattro wheel arches connected by sculpted battery above the rocker panels, camera based exterior mirrors at the A-pillar base and large enclosed Single Frame grille fitted at the bottom to ensure optimal cooling for the drivetrain, battery and brakes of the vehicle. The car has been painted in ‘Heliosilver’ technoid color that accentuates the shape of the concept car with a three dimensional depth effect.

The Digital Matrix LED headlights achieve cinematic quality in a way that if the concept car is parked in front of a wall for a re-charge, the driver can pass the time by playing a video game projected onto the wall in XXL format instead of the small cockpit display. The players in the game can be positioned several metres next to or directly in front of the vehicle for a good view.

The PPE on the vehicle has been built exclusively for battery-electric drive systems, the future PPE models will include versions with a single electric motor that use electronic coordination to deliver AWD demand and improve the balance between driving dynamics and energy efficiency. The battery size and wheelbase of PPE cars are scalable therefore suitable for different market segments.

Audi A6 e-tron is suitable for use as a primary vehicle capable of everyday needs, short trips and even long trips depending on the drive system selected and the power output. The vehicle also features Audi air suspensions with adaptive dampers.