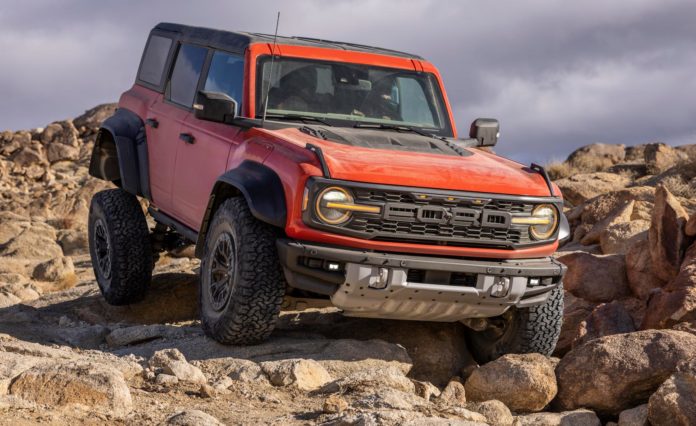 The all-new 2022 Ford Bronco Raptor is finally here, the world’s first Ultra4 Racing-inspired SUV and the most powerful street-legal Bronco ever made.

The new Bronco Raptor was built specially for desert running and boulder crawling by the same Ford Performance team that designed and produced the powerful F-150 Raptor.

Bronco Raptor has been equipped with new and improved off-road technology and hardware, Ultra4 Racing will be the embodiment of extreme off-road competition races including famed King of the Hammers in the Johnson Valley in California where Bronco Raptor will be displayed on Feb 3rd.

Additionally, Ford and Bronco will continue as the official truck and SUV of the Ultra4 series. Ford will also continue to expand its Raptor high-performance off-road vehicle franchise by including the F-150 Raptor for North America and Ranger Raptor for global markets in addition to the new Bronco Raptor.

The Ford Performance team knew the Bronco frame foundation needed a Raptor-specific version in order to increase the suspension travel and the track width for handling stability during high speed desert runs. Therefore, the Raptor core has been equipped with a fully boxed, high-strength steel frame with shock towers that increase the wheel travel and off-road durability.

In addition, the heavy-duty bash and skid plates ensure continuous driveline coverage from the front bumper to the back of the engine, transmission and transfer case. In the upper body, the B-pillar cross bar and C-pillar reinforcements deliver more than 50% total body-in-prime torsional rigidity increase compared to the standard four-door Bronco.

The new Bronco Raptor has also been equipped with Competition-level Ford Performance-developed front and rear axles. The upgraded axles increase the width of the truck by 8.6 inches over the base Bronco and the larger front and rear driveshafts support the increased wheel torque.

Bronco Raptor runs with a minimum ground clearance of 13.1 inches which is 4.8 inches more than the base four-door model.

Ford Performance team collaborated with FOX to upgrade the High-Performance Off-Road Stability Suspension (HOSS) system with Live Valve technology. The vehicle has also been fitted with 37 inch BFGoodrich KO2 all-terrain tires of size 37×12.50R17LT as standard. These are the largest tires of any production SUV in America. Additionally, two Ford Performance-designed wheels of size 17 inch x 8.5 inch will also be available.

The new model is powered by a 3.0 liter EcoBoost engine with a target of more than 400 hp and intercooling and air-induction systems designed to endure harsh desert temperatures. The vehicle has been paired with a 10-speed SelectShift automatic transmission designed for high-speed desert capabilities, rock crawling and increased strength for added durability.

The hood of the Bronco Raptor is made of sheet-molding compound and features an integrated hood vent in Carbon black whereas the fender vents are finished in the same color as the body. The new Bronco Raptor is 9.8 inches wider than the standard Bronco.

Bronco Raptor is also offered with a High Package consisting of SYNC 4 with 12 inch touchscreen, information on demand panel, voice recognition and exterior camera with 360 degree viewing capability as standard.

Customers can begin placing their orders from March 2022 and the vehicles will start arriving this summer.