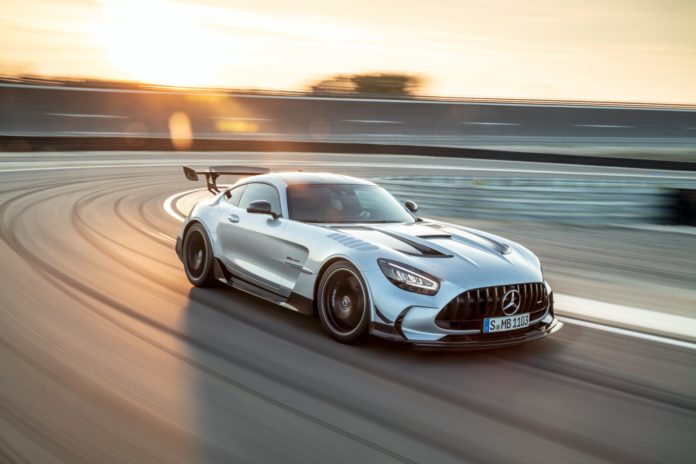 The day is finally here! The Mercedes-AMG GT Black Series has been unveiled. It follows a string of hardcore AMG GT models which include the AMG GT R, AMG GT R Roadster and the AMG GT R PRO.

Mercedes-AMG has saved the most extreme upgrades for the Mercedes-AMG GT Black Series though. That much is clear at just a glance. 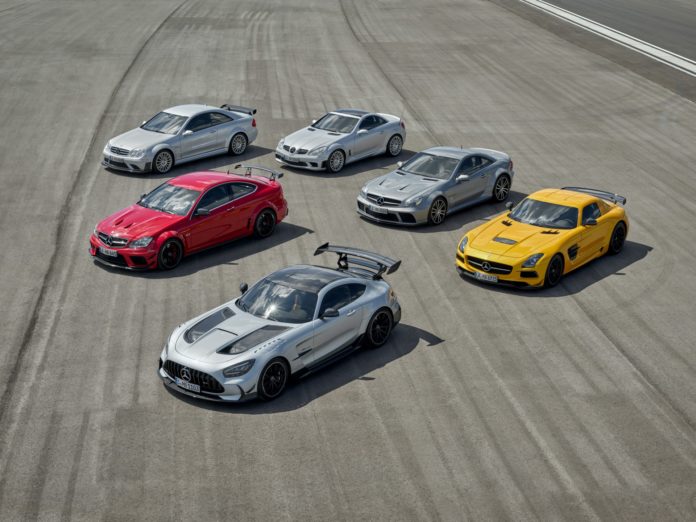 To start this story, we should first look back at the provenance of that Black Series badge. The badge made its debut on the 2006 Mercedes-Benz SLK 55 AMG Black Series. At the time, it was created as a head-to-head for the RS-series Audi’s and the BMW M3 CSL.

It’s constituent parts included a massive wide body kit, huge amounts of power and racing touches throughout the interior. It was so insane that one publication described the drive as “borderline disturbing”.

The SLK was relatively tame in comparison though. The next Black Series arrived in the form of the CLK 63 AMG Black Series, modelled after the Formula 1 safety car at the time. It followed the same formula as the SLK.

The Black Series badge then disappeared from the range. Generations of E-Class Coupe replaced the CLK but missed out on the Black Series treatment. The SLK bowed out without a Black Series swan song, we thought the badge had been dropped.

In turns out that Mercedes-AMG were waiting for something special…

The Mercedes-AMG GT Black Series debuts with big boots to fill. As you would expect, the final package gets major performance improvements, both in the engine and at the chassis. The GT Black Series also looks noticeably more hardcore than its ‘standard’ GT R sibling.

The changes really elevate the Black Series to the very top of the supercar league table. It also leaked a couple of weeks ago so we knew roughly what to expect! 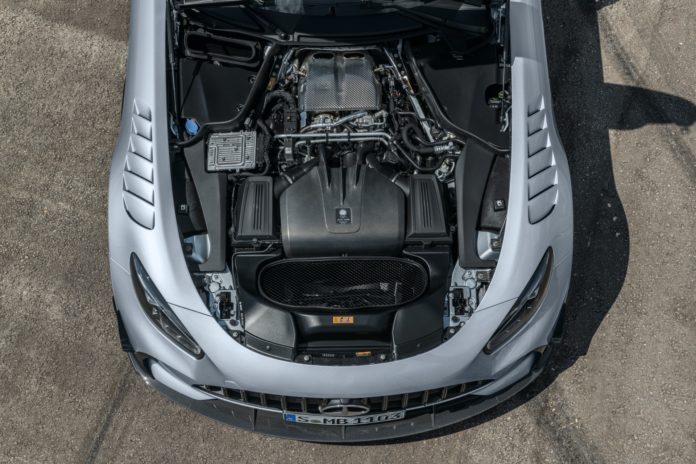 Put simply, the Mercedes-AMG GT Black Series debuts with the most powerful AMG V8 of all time. The 4.0 litre V8 has been fetled to produce 730 hp and 800 Nm of torque. In contrast, the GT R ‘makes do’ with just 585 hp.

The V8 has now been modified to use a flat crankshaft rather than the cross plane of the GT R. New camshafts and exhaust manifolds have been adapted to a new firing order. Both turbochargers are mounted in anti-friction bearings which optimises their throttle response. Larger intercoolers ensure that air delivery is consistent.

The new-found power translates into sledgehammer performance. The Black Series hits 100 km/h in 3.2 seconds, 200 km/h in under 9 seconds and a top speed in excess of 325 km/h.

The Power is put to the rear wheels through an AMG 7-speed dual clutch transmission. Physically mounted to the rear axle for weight distribution (a feature of all Black Series models), it has been modified to handle the torque.

A new Race Start function has been added to make the most of the Mercedes-AMG GT Black Series performance. The torque tube which connects the engine and gearbox weighs in at just 13.9 kg, about 40% lighter than the standard GT.

Changes to the chassis are not quite so dramatic. AMG has retained the coil-over suspension setup. Three modes are available for the AMG Dynamic Select: “Comfort”, “Sport” and “Sport Plus”. What they do is pretty self-explanatory.

Overall, the front and rear tracks are wider and the camber is more adjustable. This should be useful on a track. The Pilot Sport Cup 2 R MO tyres are customised to the Black Series with 19 and 20 inch versions at the front and rear respectively.

The AMG Traction Control system is something special. It offers 9 different slip settings for the live rear axle. They are controlled by the engine electronics without any intervention from the ESP system, in exactly the same way as the GT3 race car.

Braking power comes courtesy of the now-standard ceramic brake system. The callipers are painted back with wight lettering and special brake pads have been developed to avoid fade.

Weight is lost through the liberal use of carbon fibre. Lightweight glass has been used for the rear window and a coiled carbon-fibre transmission mount is another unique feature. The total weight of the Mercedes-AMG GT Black Series has yet to be revealed. 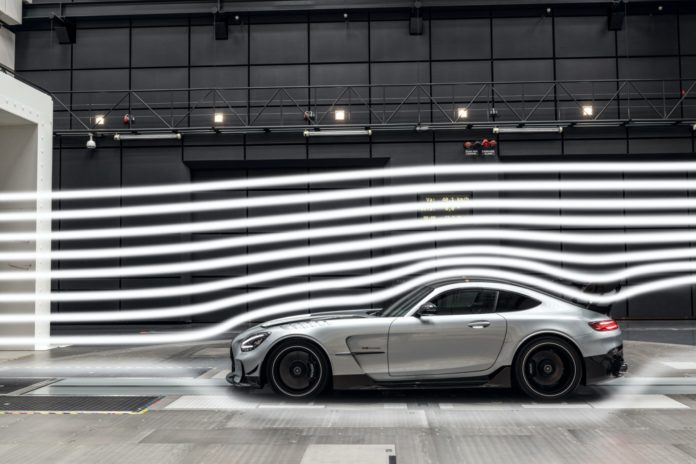 The looks of the Mercedes-AMG GT Black Series hit you straightaway. While the Black Series is similar in style to the AMG racing cars, it has its own distinct style.

The radiator struts are now finished in dark chrome. The lower side intakes are covered up, replaced by the air flow into the central inlet. The side flics are new and air curtains control and direct the flow towards the wheels.

The carbon front splitter has manual adjustment settings for the racetrack and the road. The additional front element lowers depending on the speed and is capable of creating a venturi effect on the front axle. A rear aerofoil compensates for the Mercedes-AMG GT Black Series new found front downforce.

At the rear, the apron incorporates a large diffuser, two rounded tailpipe trims to the left ad right and wheel arch ventilation. The rear aerofoil blades can be mechanically adjusted in two positions.

Rear upper blade of the spoiler is active and adjusts by 20 degrees to suit the driving situation. The underbody is almost entirely flat too. 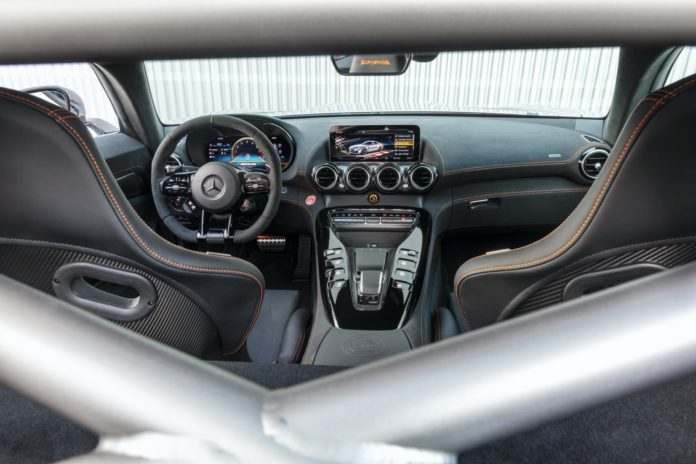 The interior is a pretty special place too. It benefits from nappa leather and dynamic microfibre with black and orange contrast stitching. The door panels are new and lightweight too with pull looks rather than conventional handles.

The AMG carbon-fibre bucket seat is only available in Mercedes-AMG GT Black Series models outside of the USA, China and Canada. As you would expect, the AMG touch is felt throughout the interior and within the infotainment software. Is there much competition? Very little for the AMG in this trim.

The Porsche 991 GT2 RS springs to mind, although you might consider that outdated already. Other options might include a Lamborghini Huracan Evo, although that’s far less extreme than the Black Series. Perhaps it might even be compared to the Aventador SVJ?

The press release doesn’t give any indication of price or availability either. If we had to guess, we might suggest the €250,000 mark. Expect availability to be limited too.