A prototype for the 2014 Audi R8 GT was recently filmed furiously lapping the Nurburgring and previewing some new features compared to the old R8 GT.

While on first glance this may appear to be the Audi R8 GT from 2010, this prototype is sporting the body of the previous Audi R8 GT, but under the lightweight bodywork are some new features for the hardcore R8 variant. Most notably, this car features the new dual-clutch S-tronic transmission of the regular 2014 Audi R8.

At the moment, the most powerful car in the facelifted Audi R8 line-up is the 2014 Audi R8 V10 Plus which produces a total of 550hp.

Previous 2014 Audi R8 GT prototypes have been spotted with more aggressive aerodynamic components including a new front splitter, large side air intakes and two carbon fiber canards up front. However, the most outlandish and eye-catching feature of recent 2015 Audi R8 GT prototypes has been their massive rear wing, similar to those fitted to Audi R8 LMS race cars. 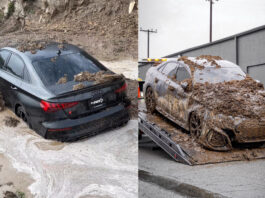