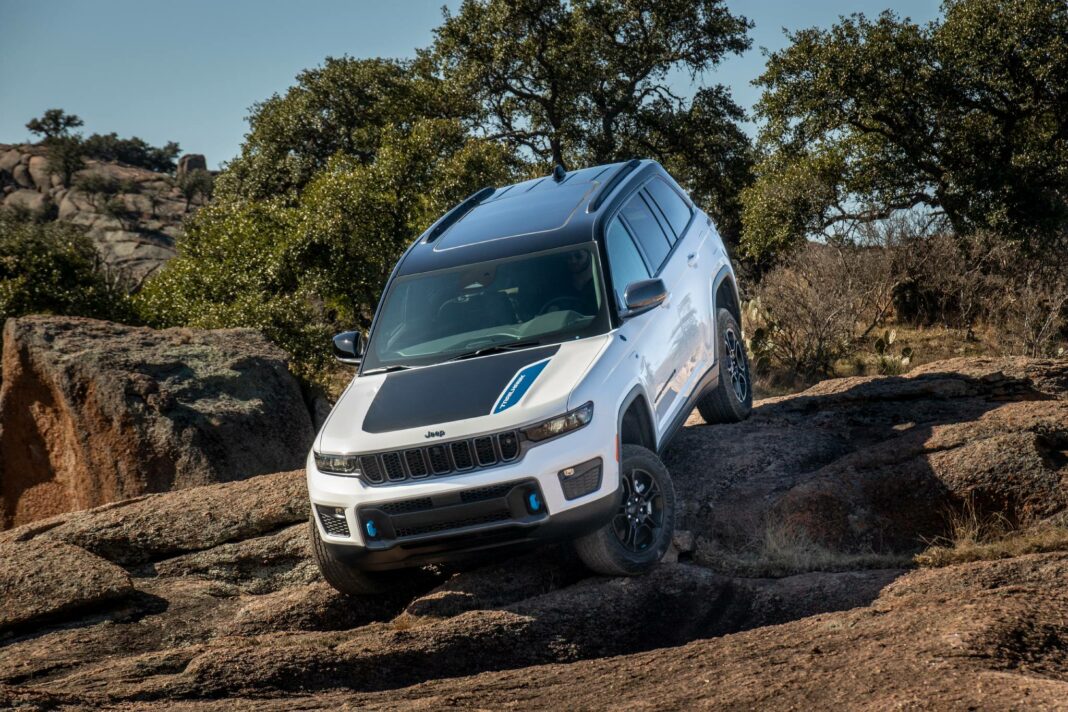 When they change an icon, you notice right away. The image that’s permanently ingrained in your mind is altered, sometimes for the better, sometimes for the worse. Which is why companies don’t change icons much. If they do, it’s usually small things or things you can’t see under the skin. “ALL NEW!” they shout, causing a twinge of panic in those of us that revere the icon, only to breath a sigh of relief when we see the icon still looks much as it did, much as it always has, much as it always will. When Jeep changed the Grand Cherokee, we sucked in our collective breath and hoped for the best.

Yes, it looks a little different. The front grill is a little more vertical and formal looking. The whole front end looks…cleaner. Smoother. The rear of the car has a removable hardtop look. Frankly, we like it. There’s a hint of Land Rover styling language in the design, likely not by accident. Jeep has always sought a little more respect from its upper class clientele while keeping it’s muddy work boots on. Nothing wrong with that. Best of both worlds. But what’s with the blue tow hooks? And the blue panel on the hood? What does that say? “4xe”. Hmmmm.

I”m not sure about this. Jeep represents off-roading. HARDCORE off-roading to the nth degree.

Electric. Somebody is messing with the icon.

Deep breathes. Let’s give it a chance. Fiat-Chrysler has surprised us before.

Inside is a new interior. Not radically different but definitely new. It looks luxurious. And smart. Both kinds of smart. Smartly designed and full of smart electronics that can outprocess most home computers. Long gone is the T-handle shifter. A rotary knob now instructs the 8-speed automatic transmission what to do. An assortment of switches and buttons allows you to customize the 4WD system to the terrain you’ll be tackling. That’s good. There’s a swaybar disconnect button to automatically disconnect the bar for more suspension travel when things get hairy on the trails. That’s reassuring. Ride-height adjustment lever. Good. So far it still seems pretty hardcore. The backseats are spacious and comfortable, and there’s plenty of storage space in the way back. Overall, it’s a very comfortable interior. Not quite Grand Wagoneer nice, but you’re not carrying the Grand Wagoneer’s payments either.

On the left side of the steering wheel is another series of buttons. “Hybrid Mode – Electric Mode – E-save Mode.” Ahhhh, okay. So it’s an electric hybrid with the ability to run as a full electric or a full gas motor (E-save). That’s not so radical as we feared.

The gas motor is a 2.0L turbocharged four-cylinder that makes 375hp and 470 lb-ft of torque. Which is impressive out of a 2.0L engine. I’ll cut to the chase and tell you that you’re going to miss the sound of the V8 but the rush and power is still there. You just have to adjust to a little whooshing and a little more vibration. That’s doable.

In hybrid and electric modes, the electric motors quietly, seamlessly, and effortlessly do what they’re supposed to do, although the gas motor doesn’t seem to charge the waterproof battery pack when it’s running, like many hybrids do. Maybe I just didn’t drive it enough – It got used as a commuter in my hands, nothing more unfortunately. In fact, while we tried every mode, we mostly left it in “Hybrid” and let the G-Cherokee do it’s thing.

And overall we liked it, though there were a few things we had to get used to. For instance, when we started it in hybrid mode, the electrics all came to life without the engine needing to fire. Normal enough. But then we began to hear rushing liquid behind the dash. It took us a while to realize that the Grand Cherokee must need to heat and circulate coolant in order to provide heat to the interior instead of using electric heaters. Once we figured that out, we weren’t as startled but it’s a sound that seems wildly out of place in an electric vehicle of something in this price range. The drivetrain switching from electric drive to gas drive wasn’t the smoothest experience either. The transition felt rough and a bit unsettling.

But maybe we’re being too harsh, too nit-picky. What else have we driven recently in this price range with this type of drivetrain? Most recently, we drove a Volvo XC-60 hybrid. It was in the same price range, with a similar hybrid drivetrain. The XC-60 felt much more refined all the way around and also felt more engaging to drive than the relatively numb Grand Cherokee. Of course, that’s on paved roads. If I had to traverse backcountry trails out West or cross Michigan’s upper peninsula via ORV trails, I’d feel more prepared and in better, more capable hands in the Jeep. I guess it depends on what your priority is.

While ours was a 2022 – we were likely one of the last to experience this fleet car – there aren’t many changes between the 2022 and the 2023. The base price was $62,485. As tested, our car came in at $71,790. It had a ton of options on it, including the “Advanced ProTech Group II” which includes “night vision.” It’s a thermal imaging type and it does a great job of helping you see in the inky blackness of night. Deer, opossums, and people all stand out in brilliant contrast to the background. As do brake discs, tires, and exhaust pipes on cars. The camera is built into the front grille and the display is in the instrument cluster between the speedometer and the tachometer.

We liked and were pleased with the Jeep Grand Cherokee overall. We wished it were a bit more engaging to drive, but it’s extremely capable in the Sport and Utility fields. It can go nearly anywhere and do nearly anything, including tow huge loads, while you sit in comfort and watch the miles get chewed up through the large panorama windshield. It does what you ask, stylishly and quite capably, without asking for much in return. And that is the essence of the Jeep Grand Cherokee.