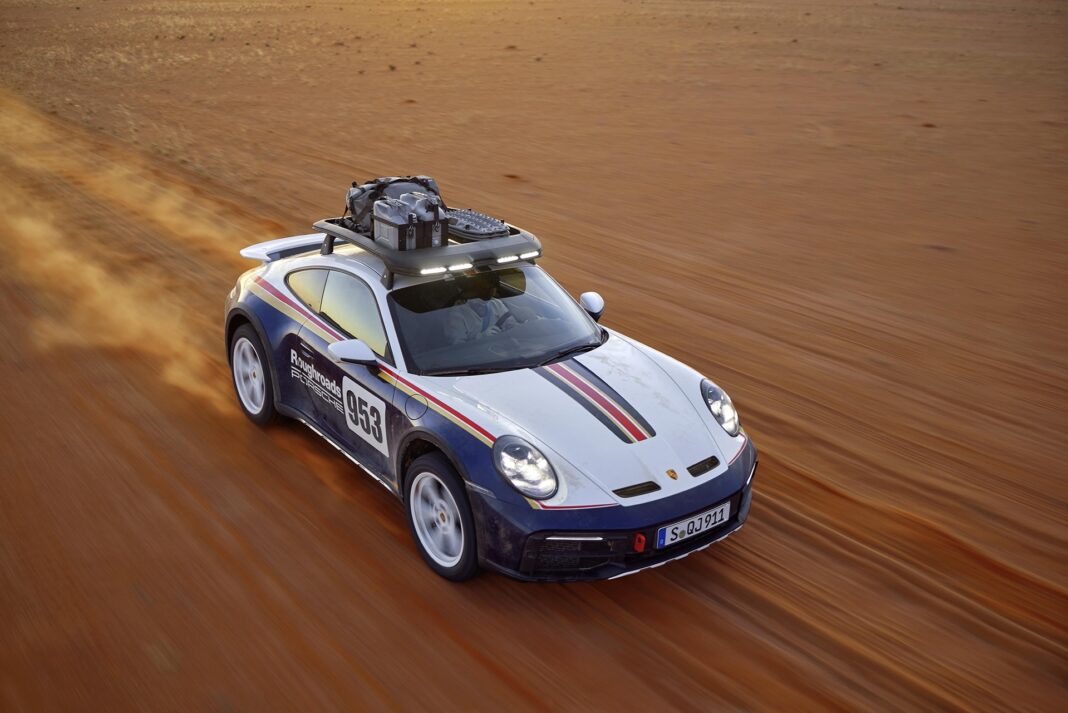 Porsche is celebrating an extraordinary world premiere at the Los Angeles Auto Show: the new 2023 Porsche 911 Dakar. Just 2,500 examples will be delivered worldwide making this one of the brands most exclusive models. It promises to be just as comfortable off road as it is on road, and demonstrates one of the most extreme variants of the Porsche 911 concept. It is clear to see, particularly in the livery which Porsche chose to unveil the car in, that it takes inspiration from the first overall victory by Porsche in the 1984 Paris-Dakar Rally, which was simultaneously the birth of all-wheel drive in the Porsche 911. As a nod to this win, the new 911 Dakar is offered with an optional Rally Design Package, reminiscent of that iconic, winning car.

The most obvious and striking detail of the Porsche 911 Dakar is its ground clearance, which is 50 mm higher than that of a standard 911 Carrera S with its sports suspension. It can be raised by a further 30 mm using its lift system, resulting in ground clearance and ramp angles you would expect from something like a Cayenne. The four-corner lift system is not designed merely for driving over obstacles at low speeds, but is an integral part of the re-tuned suspension. The ‘high level’ setting is available for more serious off-road adventures at speeds of up to 106 mph (170 km/h). Above that speed, the car automatically lowers back down to its normal level.

To suit more rugged terrain and the car’s high-speed off-road attributes, the Porsche 911 Dakar are specially developed Pirelli Scorpion All Terrain Plus tyres (sized 245/45 R 19 at the front and 295/40 R 20 at the rear). The chunky tread pattern is nine millimetres deep and the reinforced sidewalls rest on two carcass plies, helping ensure the tyres are highly cut resistant. This makes the tyres of the Porsche 911 Dakar ideal for challenging terrain while retaining a high level of on-road sports car dynamics. Optional Pirelli P Zero summer and winter tyres, also with two carcass plies, are also available.

What powers this jack-up 911? The familiar and lively flat-six from the 911 GTS models, the 3.0-litre biturbo six-cylinder engine with 473bhp (353 kW) and a maximum torque of 570 Nm delivers strong performance with a compelling boxer sound. The car sprints from rest to 62 mph (100 kph) in just 3.5 seconds and reaches a top speed, limited due to the all-terrain tyres, of 149 mph (240 kph). 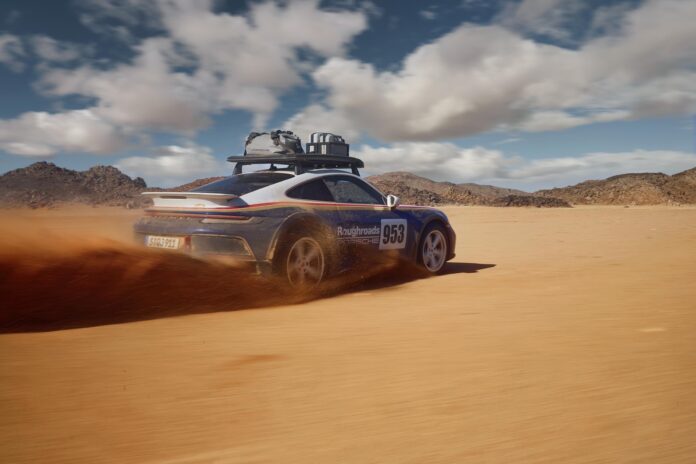 As standard, the engine comes with an eight-speed PDK and Porsche all-wheel drive. Standard equipment also includes rear-axle steering, dynamic engine mounts from the 911 GT3, and Porsche Dynamic Chassis Control (PDCC) anti-roll stabilisation. The interplay of these components results in the 911 Dakar being just as capable on sand and gravel as it is on the Nordschleife. Its maximum off-road performance is also thanks in part to two new driving modes selectable via the rotary switch on the steering wheel. Rally mode is ideal for loose, uneven surfaces and features rear-focused all-wheel drive, while Offroad mode is for high-clearance driving. Both of the new driving modes also feature Rally Launch Control, which can handle loose surfaces and wheel slippage of 20 per cent for an explosive and dramatic launch.

Want your 911 Dakar to look even more off-roady? The 911 Dakar includes a newly developed, lightweight fixed rear spoiler made of CFRP, as well as the CFRP front lid taken from the 911 GT3. There are also standard off-road details such as aluminium towing lugs at the front and back, widened wheel wells and sills, and stainless steel plates on the front, rear, and sills. The side air intakes on the redesigned front are also protected against flying rocks with stainless steel grilles. All of this, on a 911!

That’s not all, on the roof of the Porsche 911 Dakar there a visible 12-volt power outlet for the headlights of the optional roof rack. With a capacity of 42 kgs, the rack can accommodate equipment such as fuel and water canisters, folding shovels, and traction boards. A roof tent is also available for the 911 Dakar. These are seriously cool and very desirable options that we hope to see many of the cars leave the production line with!

All of this rally inspired tech does not meant that the kerb-weight of the 911 Dakar has ballooned. The interior underlines its sporting abilities with full bucket seats as standard, and the omission of the rear seats. Lightweight glass and a lightweight battery reduce its mass yet further, enabling the Porsche 911 Dakar to weigh in at just 1,605 kgs – just 10 kgs heavier than a 911 Carrera 4 GTS with PDK. 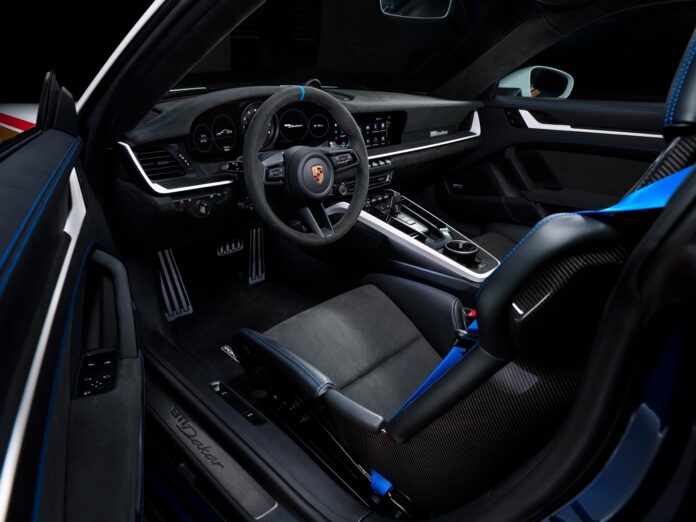 A defining feature of the Dakar interior are the standard Race-Tex surfaces with decorative stitching in Shade Green, a colour which is also exclusively available as a metallic exterior finish for the 911 Dakar (we wish there were photos in this configuration!). The foundation of the optional Rally Design Package includes an all-white body or a two-tone finish in White and Gentian Blue Metallic.

This combination of two-tone paintwork and wrapping on a standard model is a first for Porsche. On each door, customers can choose an individual starting number between 1 and 999. The look of the 911 Dakar with Rally Design Package recaptures the winning car from the 1984 Paris-Dakar Rally and, in addition to decorative stripes in red and gold, features a ‘Roughroads’ logo on the doors, a clear nod to the Rothaman’s lively… sans Rothmans. The term ‘Roughroads’ is a registered trademark and reflects the concept of the 911 Dakar. 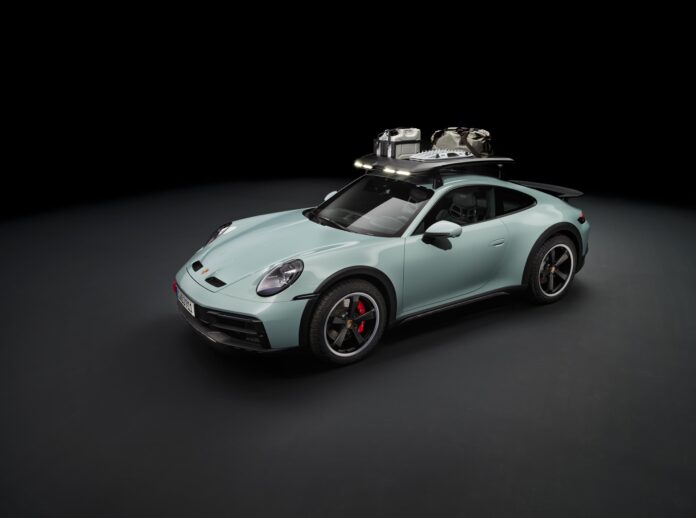