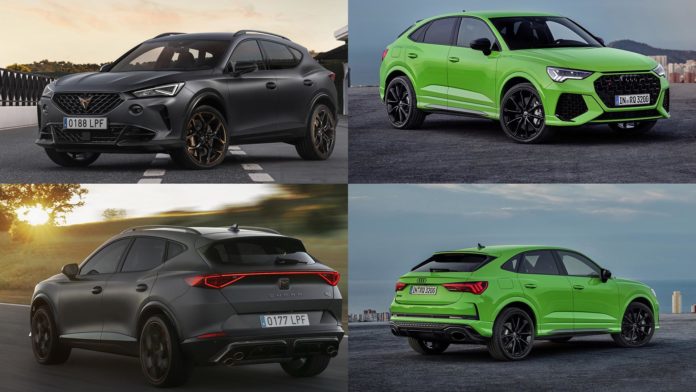 Since 2018, Cupra has continuously reinvented itself as the performance arm of SEAT vehicles. Cupra is now a standalone brand and shares no SEAT badging on their cars, they even have their own logo. Of interest today is the Formentor.

Most people have not heard of the Formentor and that’s because the Audi Q3 dominates most markets where it would otherwise enjoy popularity. It uses the same Audi engines found on the Q3 and can be ordered with a 7-speed DSG or a 6 speed manual.

The current Mk2 Q3 is however built on a MQB A2 platform that it shares with the Mk2 Tiguan while the Formentor is built on a MQB Evo which also houses the new Audi A3 and Golf 8. Nonetheless, they are all built on the second gen MQB platform just under different variations.

The trims we are most interested in are the Formentor VZ5 and the Audi RS Q3. The VZ stands for Veloz (fast in Spanish) while “5” represents the number of cylinders in the engine, yes, it uses the same 2.5L turbo-5 engine found on the RS Q3 and the RS3. The output numbers are almost the same.

With more similarities than expected, it becomes easier to point out the few noticeable differences. The Cupra design team did an amazing job on the exterior of the Formentor VZ5, they market it as an SUV coupe due to the slanted roof line. I find the design more refined than any other SUV coupe on the market right now. It doesn’t try too hard to be a coupe, the lines flow in a neat fashion.

The RS Q3 on the other hand comes in two forms, the traditional crossover/SUV style and a modernized SUV coupe called the Sportback. The RS Q3 Sportback lacks those neat flowing lines and instead incorporates the older hard flowing lines like a first gen X6.

Moving on to the interior, the RS Q3 benefits from Audi’s simple but elegant design. It’s not a pile up of technology or the mediocre screen show plaguing the industry at the moment. The stitching and leather finishes are what you would find on a Lamborghini Urus, it is after all called a mini Urus.

While the Formentor VZ5 interior shows major improvements over previous Cupra/Seat models, it is hard to ignore a few odd looking things like the vents on the center console especially given the near identical price tag of both cars. The infotainment screen could have received better integration on the dashboard too. Remove the screen and you have a period correct dashboard that is much more appealing.

The center console borrows a few elements from VW, and perhaps we shall see a more refined look in future. The rear passengers enjoy even better styling, and stare directly at the CUP bucket seats in front of them. Nappa leather dominates the seats all round.

At the rear you have these copper finished dual tip exhaust pipes, surrounded by a carbon fiber rear diffuser. The magnetic tech gray matte finish on the car works does complement these tiny details.

The 20 inch copper alloy wheels add to the list of copper details which also includes copper stitching inside. The 375mm 6-piston brakes are from Akebono. You also get Full LED headlights and coast to coast LED tail lights. The audio system comes from Beats Audio.

The Formentor VZ5 and the RS Q3 are part of an ever growing segment of performance crossovers, and while the VZ5 is only available in Europe as a left hand drive car, the rest of the world still has a handful of options to choose from. The 320hp Tiguan R is already gaining the same popularity as the Golf R, proving that the gap between hot hatches and hot compact crossovers is only getting smaller with time.