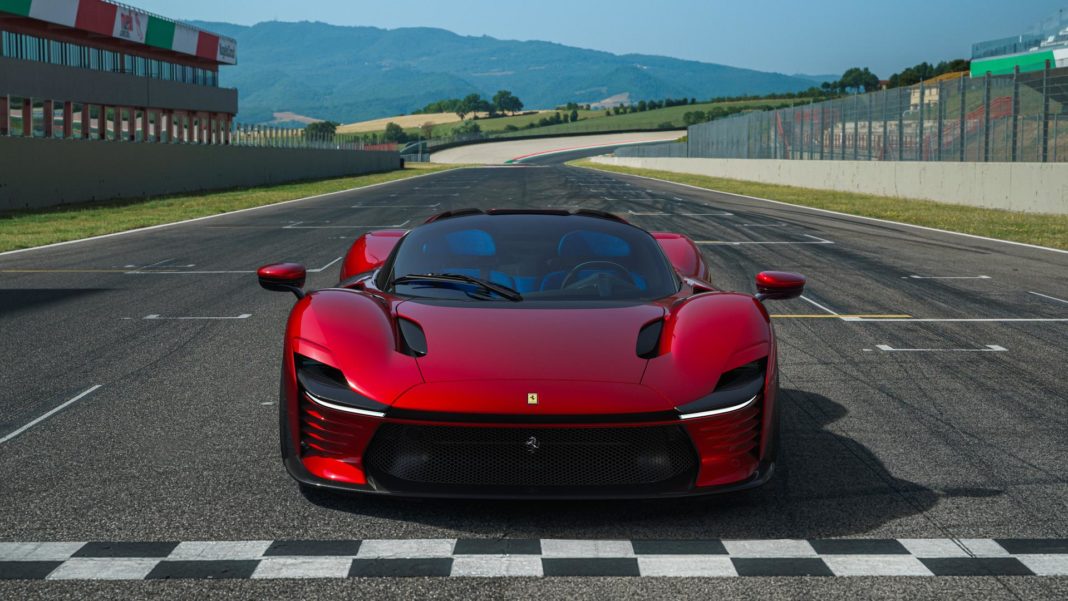 The new Ferrari Daytona SP3 was officially unveiled at the Mugello Circuit during the 2021 Ferrari Finali Mondiali. The new limited edition model will be joining Icona series which debuted in 2018 with the Ferrari Monza SP1 and SP2.

The Daytona SP3 features a Targa body with a removable hard top, the design of the vehicle features surfaces and contrasts inspired by the legendary 1960’s prototypes such as the 330 P4, 512 S and 350 Can-Am.

The new model is powered by a 6.5 liter naturally aspirated V12 engine mounted in the mid-rear of the vehicle. The engine delivers an output power of 840hp and 697 Nm of torque, it is the most powerful engine ever built by Ferrari. The acceleration from 0-100km/h is achieved in 2.8 seconds and 0-200km/h in 7.4 seconds.

Additionally, the aerodynamics and design of the Daytona SP3 focuses on achieving maximum efficiency using passive aero solutions. The vehicle is currently the most aerodynamically efficient car built by Ferrari without the use of active aero devices thanks to the unique features such as chimneys that release low pressure air from the underbody.

The exterior of the Daytona SP3 features a wraparound windscreen back, clean double-crested front wings, butterfly doors with an air box for channeling air to the side radiators, wing mirrors moved to the top of the wings, a central grille framed by two pillars and horizontal blades on the front bumper and two air vents on the bonnet for making the wings look wider.

Furthermore, the exterior also features tail lights made of horizontal luminous bar beneath the spoiler joined into the first line of blades and twin tailpipes in the central upper part of the diffuser.

The interior of the vehicle is also inspired by the historic Ferraris. The interior features a broadened cabin with a clear break between the dash area and the two seats, a dashboard divided into an upper and lower level, independent seats integrated into the chassis and leather padding on the door panel.

Additionally, the seat is an integral part of the chassis to help reduce weight and improve the seating position of the driver. The steering wheel features the same Human-Machine Interface as on the SF90 Stradale, Ferrari Roma, SF90 Spider and 296 GTB and the dashboard is equipped with a 16 inch curved HD screen.

The vehicle has been fitted with a set of new P Zero Corsa tires optimised for both wet and dry surfaces from Pirelli.