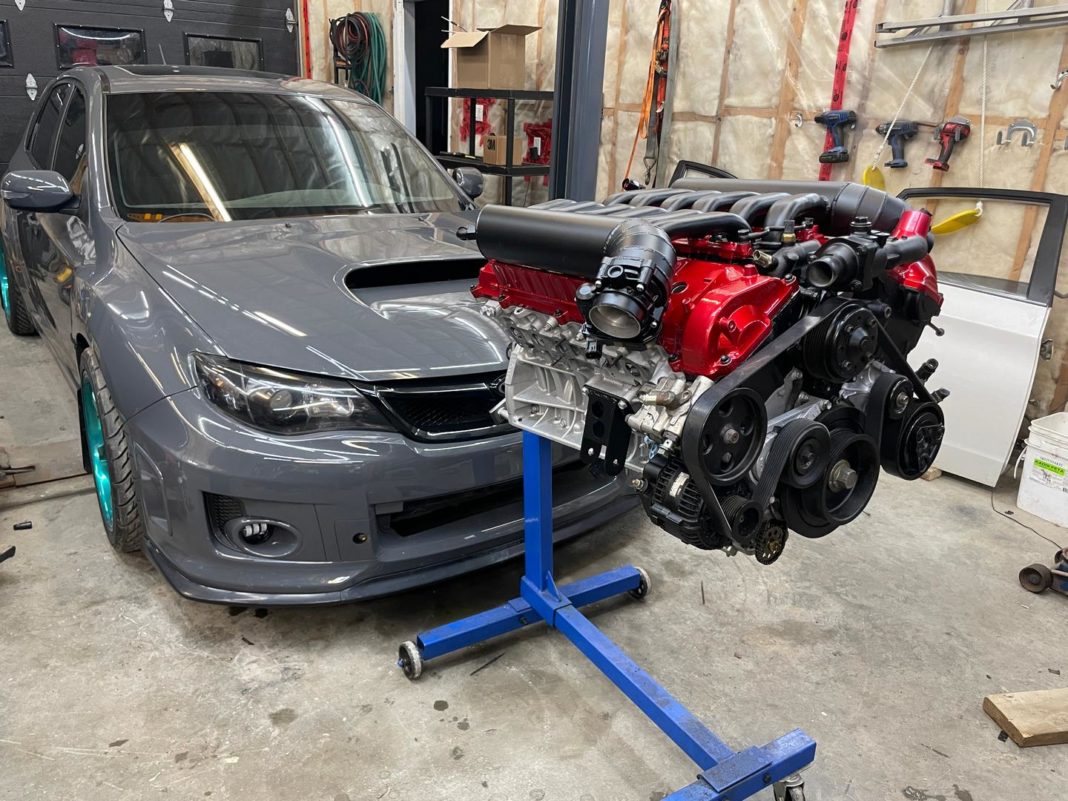 This week’s Project Exposure feature is a completely nuts work of art, built from a home garage after work and on weekends. No one has attempted such a project before for a good number of reasons including the tedious amount of wiring work required and frankly because it’s not the first option that comes to mind when drafting up project car ideas.

Mr. Proulx who goes by the username @1lowrx on Instagram has managed to build himself the very first V12 powered Subaru WRX STI in the world. Before that, the same car had a 2JZ engine while still retaining its AWD configuration. On the outside, the beloved hatchback body remains largely unchanged with the real magic happening underneath.

To better understand this project, we had a quick Q & A with Mr. Proulx and this is what he had to say.

Q: What in the world is this? Must be the first in the world no?
A: Yes. It’s the Worlds first twin turbo V12 swapped Subaru STI with a BMW DCT transmission

Q: What V12 engine are you using?
A: It is a Toyota V12 1GZFE from a Toyota Century, imported from Japan. I added two G30-770 turbochargers and upgraded to forged rods, pistons and valved springs. I’m also using 1000cc Bosch Injectors, haven’t gotten around to compiling the full mod list as the project is still ongoing.

Q: There must be a lot of wiring involved in a project like this…
A: Yes indeed, wiring was a lot of work. I’m using a MaxxECU PRO Standalone. Thankfully my stock STI cluster will work just fine.

Q: What are your current power goals?
A: I am aiming for a minimum of 1000hp when it’s all said and done.

Q: I understand the project started as a 2JZ STI right?
A: Yes, correct. When I bought the car in 2019 my plan was to swap my RWD 2JZ setup that was already running in another car. But I ended up doing the world’s first AWD 2JZ with a 6-speed manual transmission that could go from RWD and AWD with a flick of a switch!

Q: Well thank you Mr. Proulx for the quick Q & A, we know the project is only partially done and there is a lot of work that is still pending. We particularly look forward to hearing it roar up to life for the first time. Do share some videos please :)
A: Of course, and thank you too!

There you have it ladies and gentlemen, as you can see it’s quite an interesting project and one that leaves you wanting to know more. For those who are not familiar with the WRX STI, it is Subaru’s flagship sports car. Naturally, the car comes with a turbo-4 cylinder boxer engine with an output of 300hp. The current generation of STIs only come with a 6-speed manual.

The Toyota V12 engine in question is a 5.0L naturally aspirated V12 that was used in the Toyota Century since the late 90s. With the introduction of the 3rd generation Toyota Century in 2018, the V12 was ditched in favor of a more emissions friendly V8. The V12 produced up to 308hp while the V8 gets more generous with 375hp or 425hp when combined with an electric drive system.