Home Car News Mercedes-AMG One Stuns in Magno Red: F1 Car for the Road is... 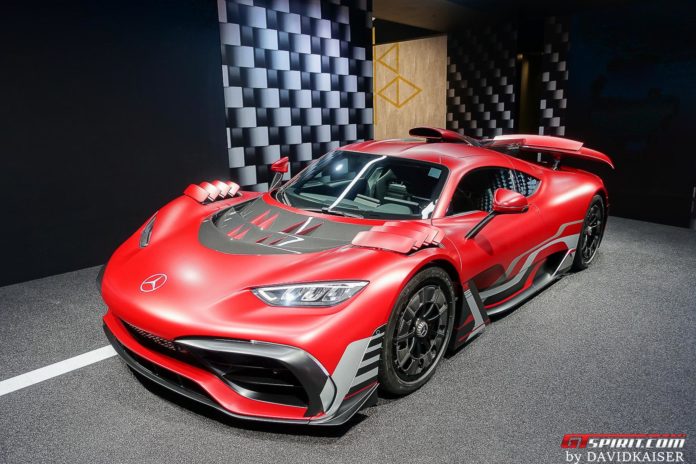 The Mercedes-AMG One R50 is months away from hitting the streets as a road legal Formula 1 car. Deliveries were initially scheduled for the last quarter of 2021 but further delays could now see that happening in the first quarter of 2022.

This is Mercedes-AMG’s first proper hypercar since the CLK GTR and the CLR, it will be limited to just 275 units which have all been sold out. To make up for the numerous delays resulting from difficulties in homologation, AMG released a limited edition AMG GT Black Series called the P One Edition. It was only sold to AMG One buyers and has the same Petronas livery found on the Mercedes W11 F1 car. That painted livery costs $50k.

The AMG One is powered by a 1.6L PU106C E-turbo V6 combined with an MGU-H turbocharger, an MGU-K E-motor and 2 front-axle E-motors. The engine alone produces 748hp will the MGU-K and MGU-H units produce 161hp and 121hp respectively. The 2 electric motors at the front produce 322hp, bringing the total system power output to 1,242hp.

The last public appearance took place at the IAA Mobility 2021 in Munich where Mercedes-Benz showcased it alongside the new Mercedes-AMG GT 63 S e Performance which is now the most powerful AMG road car in history as of 2021.

The Mercedes-AMG One costs around $2.7 million.