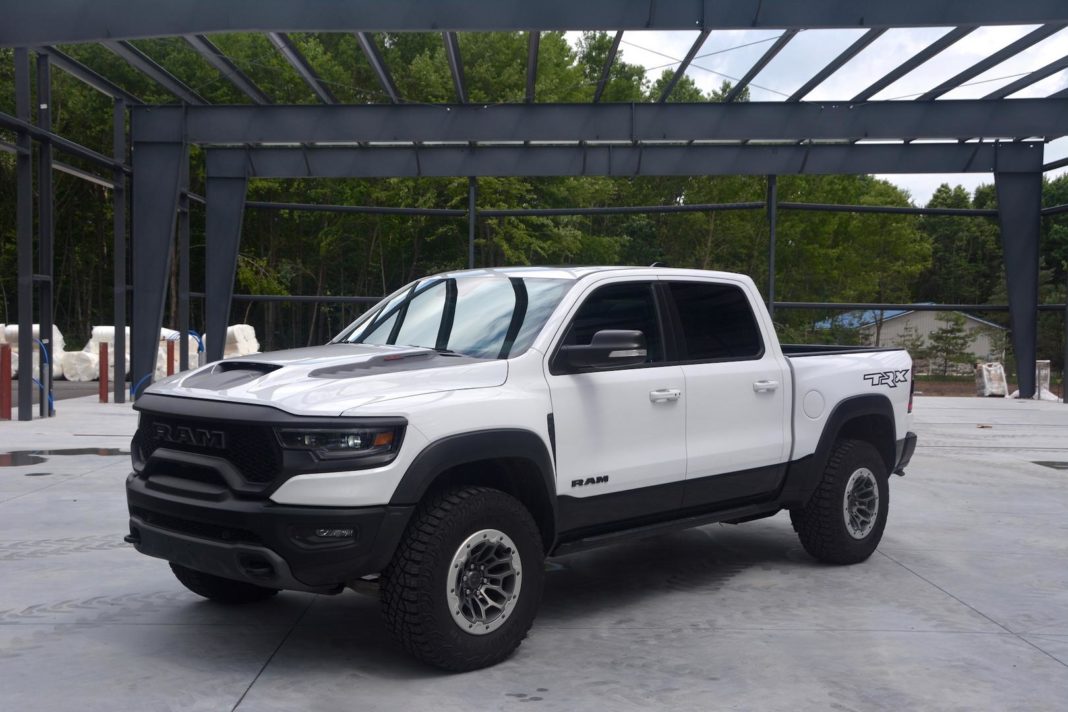 The new Ram 1500 TRX is simply the most badass pick-up truck on the planet. It does everything, it goes anywhere, and it simply LOOKS completely badass while doing it. Or doing nothing. Parked, even – still badass. We don’t review many pickups around here at GT Spirit so note that we’re making an exception for this one. Because badass.

When we first heard that Ram was working on a Hellcat-powered pickup, we figured they’d cram the Hellcat 6.2L supercharged Hemi V8 under the hood, give it some massive tires, a nice interior, and maybe a couple trick body additions to make it look sportier, and release it as “The Fastest Pickup in the World!”. Which is what they did. Buuuuuuut….they also went a lot further than I anticipated. This is no one-trick pony. No mere muscle car pickup truck. The boys at Ram were much smarter about it than that. They looked around for the baddest pickup on the market, analyzed it’s abilities and it’s strengths and it’s weaknesses, and then designed the Hellcat-Ram to beat it in every way.

That target truck was the Ford Raptor – the biggest, most capable, most sporting pickup ever designed and produced at that point. In a way, it rewrote the rules on what pickups could be and redefined what a “sport truck” was. I mean, they named it after the smartest, meanest, most capable dinosaur in Jurassic Park so it has to be fairly awesome. It’s so impressive that the last time Editor Sellmeijer visited the US, the Raptor was the only vehicle he even considered to request as a loan as he explored the classic car gathering at Monterey in California.

Fiat-Chrysler took note of that and the engineers, designers, and project managers decided it was time to take Ford down a peg. They started with the capable Ram 1500 chassis, added one of the most impressive engines in the world (Hellcat, anyone?), installed one of the most capable full-time four-wheel drive systems in the world, added Bilstein remote-reservoir off-road racing shocks that provide incredible amounts of travel and active bump absorption, a huge 33-gallon fuel tank, and added monster brakes to stop the 3-ton truck with ease. They gave it a luxurious and wildly spacious interior with nearly every creature comfort and amenity you could ask for. And then they drove it until it broke, improved it, and pushed it even harder.

And they’re not shy about the fact that they were gunning for the Ford Raptor. Open the center console and if you look closely, you’ll notice an easter egg molded into the mat at the bottom of the cubby. It’s a scaled comparison of a human being, the Ram TRX, a huge Tyrannosaurus Rex, and a rather small Velociraptor, which is noted “actual size.” OUCH. Burn, Ford. Not convinced? Pop the hood and remove the plastic engine cover and you’ll find another easter egg molded into the plastic liner: a T-Rex with a dead Velociraptor in it’s jaws. You have to love the cheekiness of the designers and engineers at Fiat-Chrysler.

Like every Hellcat-powered vehicle Fiat-Chrysler sends us, it promised to be a mobile event and we were eager to check it out. And we’d be lying if we said we weren’t a little intimidated by it when it turned up in our parking lot one sunny morning. It looked like a competition Trophy Truck that had gone off course during the Baja 1000, gotten lost, and somehow ended up in our parking lot. The beautifully beefy body, with flared front and rear fenders, functional air ducts and vents, sitting above those massive 19×9” bead-locker wheels with deeply treaded high-profile off-road tires was an awe-inspiring sight to behold.

This was more than just a fast truck, this was a seriously capable fast truck. The small cargo bed was mostly full of a full-size spare wheel and tire mounted flat like the Baja Trophy Trucks do it. Nice touch. Not super practical, but then nothing about this truck is pedestrian or practical. A huge power bulge in the hood is fed by a massive intake duct with 3 red LED lights in it and is flanked by two massive multi-louvered vents to quickly get rid of hot air from the engine bay. Trim that reads “Supercharged 6.2L” is affixed to it. And the massive decals on the rear of the bed that read “TRX” tell everyone exactly what you’re driving. You know…in case they missed the huge bulk of the truck and the massive wall of supercharged engine noise that follows you everywhere you go.

Inside, the accommodations are wonderfully comfortable. I think there’s more room inside than some hotel rooms I’ve stayed in. There are gauges for everything, switches for drive modes (seven of them!) and four-wheel drive settings – 4WD high, 4WD low, 4WD auto – axle-lock and launch control. There’s sat-nav, heated and air-conditioned seats, paddle shifters, rear heated seats, tons of storage space. You name it, it’s got it.

Punch that big red button and the big angry Hellcat engine roars to life louder than most cars and trucks you’ve heard, then settles into a big, deep, throbbing bass note idle. It sounds amazing and it makes you smile even the 100th time you start it. Seriously, any day you get to start it – no matter how bad the day has been thus far – is the best day of your life. Feel the sound for a few seconds, pull the gear selector knob back to “D” and head on out.

The engine sound glorious as you head out, rising in intensity with some light supercharger whine cancelling some of the bass of the engine. Nail the throttle and the big engine roars and roars and the TRX gains speed quicker than any truck its size should. Hold the pedal down and the roar builds to something not unlike the roar from the T-Rex in Jurassic Park when it charges prey.

If the hair isn’t standing up on the back of your neck at this point, you’re probably dead. Or peeing yourself. The 3-ton TRX charges to 90 mph faster than any truck and more than 95% of the cars I’ve driven, clicking off the eight gears as quickly as it can. So yes, it’s fast. But it’s not Charger SRT Hellcat Redeye Widebody fast. It’s really not built for immense speed.

The suspension is very soft. Sharp corners make it lean like a sailboat in a heavy wind.It absorbs bumps beautifully but when things are this soft, it better. As a result, it’s limited to only 118 mph top end.

What it comes down to is that It’s not about how fast you can go, but how well you can go fast. Take a right turn off onto a country dirt road and the story changes. Suddenly, on roads that can get normal cars sideways in a hurry, the TRX comes into it’s element. It runs with a sure-footedness and composure that I’ve never experienced before on dirt. 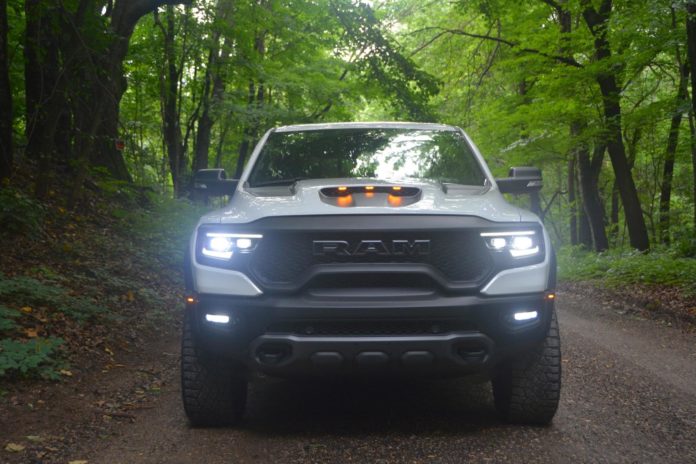 Like a cross-country runner, it never runs out of breath or ability. Washboard ruts that cause lesser vehicles to shake uncontrollably and get squirrelly are simply absorbed by the advanced active suspension. The back end never kicks out (unless you do it intentionally), the front never plows, and you can run terrible roads with surprising speed. We found ourselves running dirt roads comfortably between 85-90 mph without worry or concern. The suspension keeps everything in check and with nearly 2’ of suspension travel, we could have taken even worse roads at those kinds of speed. Or open desert like the Baja 1000 race.

But it’s so much more capable than that. There are seven different drive modes: Auto, Sport, Tow, Snow, Mud/Sand, Rock, and Baja. All it takes is the push of a button and the trucks performance is transformed. You can in lock in 4WD-low, select “Rock” mode and spend all day rock crawling up the impossible Rubicon Trail. You can tackle the immense sand dunes at Silver Lake State Park in Michigan by selecting “Mud/Sand” mode. You can run open ground in the desert at high speed in “Baja” mode. Or you and the wife can dress up and go out to dinner in it. Despite it’s enormous capability, there’s no compromise to it.

And it’s an absolute pleasure to drive around town. It’s never excessively loud or uncomfortable. In fact, it’s one of the nicest riding trucks we’ve ever experienced. It’s turning radius is surprisingly tight and despite its size, it’s very maneuverable. Fitting its immense width between the lines at the supermarket is the hardest thing about it but theres a host of sensors to assist you.

Once I discovered Baja mode, I was sold. I went exploring every dirt road around my house that I’d spent the last two decades trying to avoid. Feeling that degree of composure at crazy speeds down dark, narrow, tree-lined roads was intoxicating. It was like an off-road sports car. Windows down, the Hellcat engine bellowing like a T-Rex, trees flashing past, feeling the suspension compress when hitting small hills then getting the truck light as it fought to go airborne. Incredible fun. 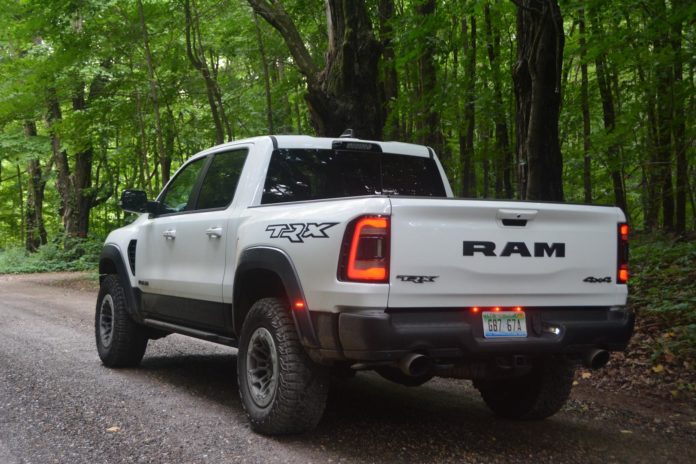 And people recognize it too. Every time I stopped to get gas I’d have at least two people stop to talk about the truck. Some just yell things like “Nice truck, man! Good for you!” across the parking lot with a big grin and a thumbs-up.

Speaking of gas stations, the only real drawback to ownership is the price of fuel and the amount required. Due to the V8”s supercharger, it requires premium fuel and it requires a lot of it. The EPA estimates that it’ll get 14 mpg on the freeway and 10 around town if driven conservatively. But you can’t drive something this much fun conservatively. My first fill-up cost me $120. The pump actually had a built-in shutoff at $90 so I had to run my card again to complete the fill-up. But I also think it’s worth it for the smile it puts on your face and the joy it fills your heart with.

The Ram 1500 TRX is one awesomely capable machine. It’s like a go-anywhere, do-anything luxury sports car. While I’ve never been a pickup guy (they’re tools for work in my opinion), the TRX hit all the right chords for me. Maybe it appeals to the mountain biker side of my personality: off-road speed and capability combined with on-road comfort. The guys at Ram are to be commended for not just making a fast street truck but something much, much greater. The TRX is simply awesome.