McLaren recently announced the limited edition McLaren 765 LT Spider, following on from the launch of the 765 LT Coupe in 2019. Just 765 will be produced, the same production run as the Coupe.

The main change is the addition of an electrically operated, one-piece carbon fibre Retractable Hard Top (RHT) which lowers or raises in just 11 seconds, at speeds of up to 50km/h (31mph). A powered rear window allows the ‘LT soundtrack’ to permeate the cabin, released through the full titanium exhaust system.

As with the Coupe, the McLaren 765 LT Spider gets McLaren’s 4.0 litre twin-turbocharged V8, producing 765 hp and 800 Nm of torque. Despite losing its top, the Spider loses no pace for the 100km/h spring, achieving a time of 2.8 seconds, losing just 0.2 seconds over the hardtop at 200 km/h.

Over the 720S Spider, the 765 LT Spider gains 80 kg, 49 kg heavier than the 765 LT Coupe. The majority of weight is lost through the titanium exhaust system, the use of cutting edge transmission materials and through thinner glass.

A carbon fibre package adds aerodynamic parts for the front splitter and front floor, side skirts, front and rear bumper and rear diffuser. Calibrations for the active rear wing are modified over the Coupe to take account of the roof up/roof down positions. 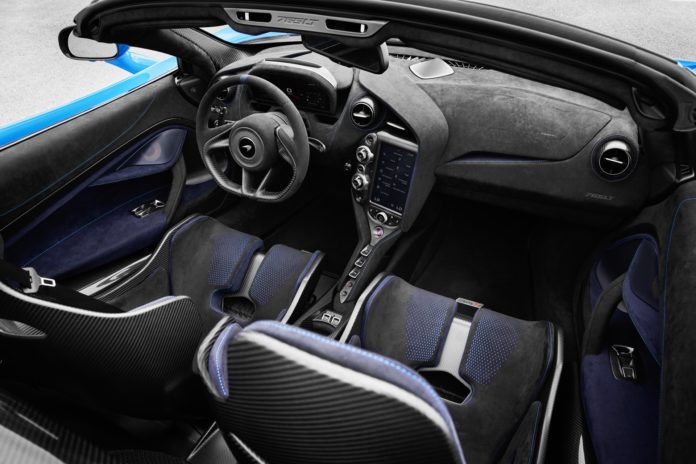