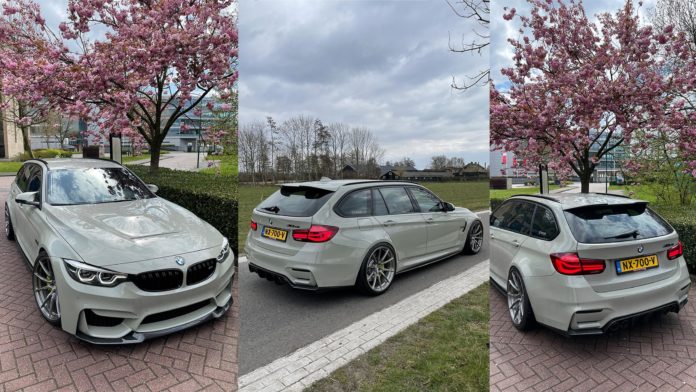 It was one of those Sunday afternoons where you have a baby on the way, a couple of sports cars in the garage and a boring F1 race on TV. Then it suddenly hits you that one of your precious toys has to go in order to make room for the dreaded family minivan.

But for Sander a car tuner based in The Netherlands, this meant a new opportunity to get creative. It all began in 2019 when he acquired a BMW M3 CS which if we are being entirely honest isn’t the first choice that comes to mind when shopping for a family car. The 2018 BMW M3 CS weighs 50kg lighter than the regular M3 sedan, engine output was increased to 460hp and 601nm of torque. Production was limited to just 1,200 units worldwide.

He bought the car with a low mileage of only 5,000km at a time when they were trading above the €120,000 mark. In the car enthusiast world, a family car is defined as a vehicle that combines performance, spacious cabin and extra room for the dogs while retaining good looks or an acceptable design. So instead of acquiring a soulless minivan like regular people, Sander decided to convert his newly acquired M3 CS sedan into a wagon or Touring in BMW language.

I recently had a quick seat down with him where he answered key questions regarding his 1 of 1 project car, below is the script.

1. What was your motivation for the project?

Sander: I have had many sport cars but when we were expecting a baby I wanted to make my ultimate family racer and that’s when i decided to build a performance wagon using my already existing M3 CS sedan.

2. When did you start the project?

Sander: I bought the M3 CS on 6-12-2019, and from that moment we have worked every spare minute on the project to where it is now.

3. What is the base car/donor car?

4. What modifications did you do.

All major parts are still OEM, and these were basically copy and paste from the M3 CS.

5. What are your current output numbers (hp/torque)

Sander: 9 months or 600 hours to complete the project.

Sander: Depends on how you do it. The donor M3 CS was only 6 months old and 5000km on the cluster so that was very expensive. But I have done almost all the work myself. If you would take a crashed 2015 M3 and do most work yourself you will end up spending around 50 to 60K.

Sander: I love it, I wasn’t too sure about the new front but it’s slowly growing on me. But when I compare it with the F8x front I still do think the F8x front looks better. Maybe I should built one with a custom front?🤔

9. What did you do with the MC CS chassis?

Sander: I already sold that old iron and got 60 euro for it 😂