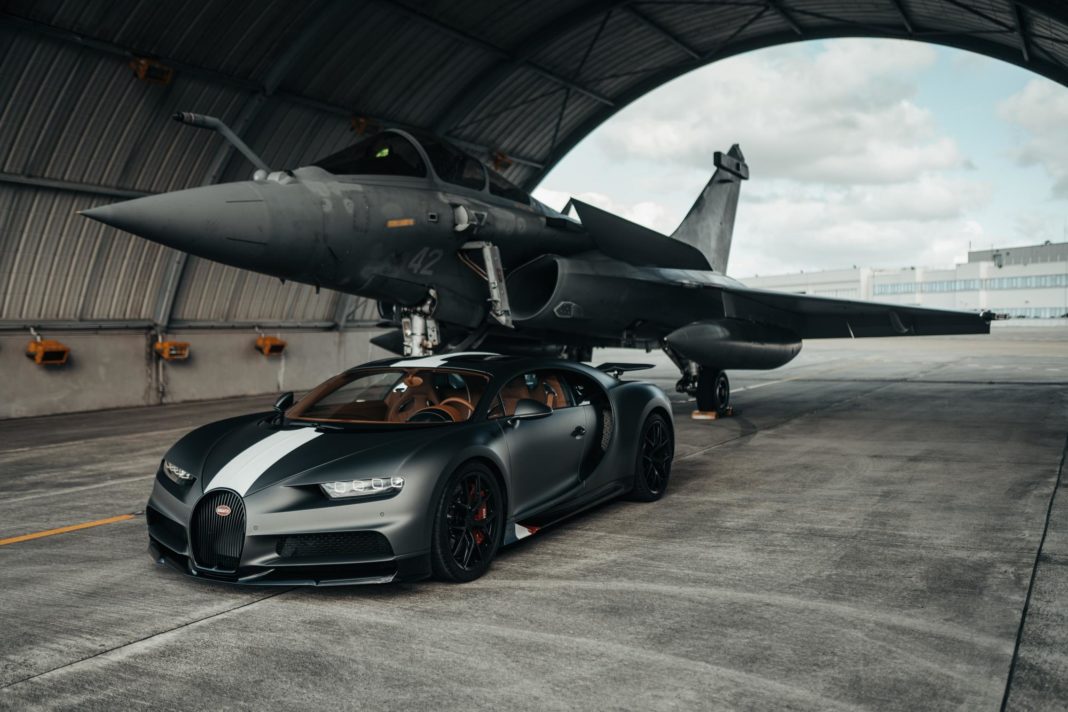 A Bugatti Chiron Sport and The Dassault Rafale Marini faced each other in North-west France at the Naval Base in Landivisiau. The two vehicles have been built in France using high-technology, sharing technical progress from developments in automotive and aerospace engineering.

Back in 2007, a Bugatti Veyron took on a Eurofighter Typhoon jet in a drag race. In this current match-up, Bugatti Chiron Sport and the Dassault Rafale Marine were put up against each other to measure variables such as acceleration, torque and braking.

Albert Divo, Robert Benoist and Bartolomeo were race car drivers who also flew the French Air Force at the beginning of last century. A French aviator Roland Garros owned a Bugatti Type 18 in order to be as fast on the ground as he was in the air.

In addition, the race car drivers benefitted from the experience in the cockpit and were fascinated by Bugatti’s light, agile and fast automobiles that are in comparison with the aircraft.

The Bugatti Chiron Sport ‘Les Légendes du ciel’ was officially unveiled at the end of last year and is limited to only 20 units worldwide. The vehicle is a French luxury marque’s way of honoring the French aviation and the former Bugatti drivers who also flew airplanes.

It’s finished in Gris Serpent matte grey paintwork, blue front side skirts and white and red Tricolor. These are just some of the features that pay tribute to the aircraft. In addition, the front side skirts are made from black visible carbon fiber, the radiator grille bars are made from laser-cut deep-drawn aluminium and a brushed aluminium sill panel that features ‘Les Legendes du ciel’ letterings.

The Bugatti Chiron Sport features a leather interior in Gaucho color similar to the natural leather material that was used in airplanes in the past. The natural material is contrasted with aluminium trims and inlays featuring the ‘Les Legendes du Ciel’ logo which is also on the headrests. A sketch of the racing scene between Nieuport 17 aeroplane and Bugatti Type 13 can be found on the door panels, the sketch represents the two historic links by the limited edition hyper sports cars.

The Bugatti Chiron Sport and the Rafale Marine have a lot in common in terms of technology and materials, the brakes on the Rafale and the Chiron Sport were both developed by Messier-Bugatti and both icons have been built using lightweight materials.

Bugatti Chiron Sport vs Jet
1 of 14