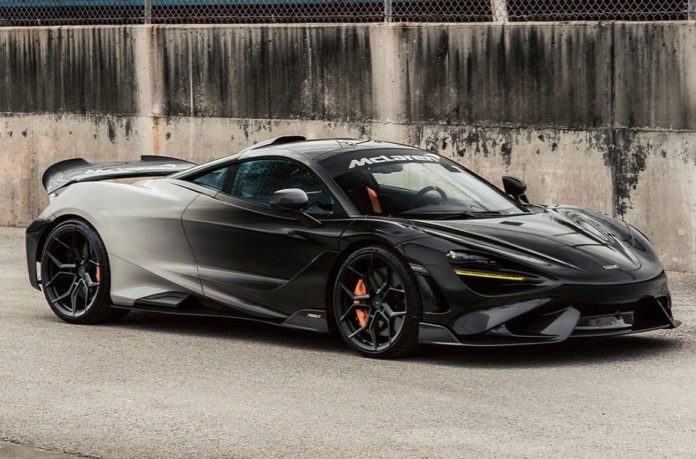 The McLaren 765LT is already very fast from the factory, building on the success of the 720S that shattered records on drag strips around the world. It one of the new age cars leaving the factory with a 1/4 mile time of <10s, McLaren quotes 9.9s. The 4.0L V8 twin-turbo has been upgraded to produce 755hp and 800nm of torque, a 0-62mph time of 2.8s and a top speed of 205mph. The latter is lower than the 720S’ 212mph top speed due to added downforce parts that create more drag.

A group of supercar owners gathered on a Florida dragstrip and among the cars was a new McLaren 765LT. This particular car owned by @Petfred already received a tune from M Engineering after upgrading to IPE downpipes. Those were the only modifications done to the car prior to the 1/4 mile run. Driven by @Gidi28, the 765LT managed an ET of 8.916s with a trap speed of 157.85mph. That makes it the very first McLaren 765LT in the 8s, what’s even more impressive is only two modifications were responsible for this achievement. That means an extensive engine upgrade including turbos would easily put it in the 7s or 6s like Gidi has done with his GT-R.

In comparison, Petfred’s 800hp GT2 RS with a tune and straight pipes managed 10.1s, he has since upgraded the turbos but is yet to attempt another run. The 765LT’s journey on the other hand is just beginning. Popular YouTube drag racing channel DragTimes was the first to show just how quick the 765LT is, his bone stock car ran an ET of 9.3s with a 150.87mph trap speed. Petfred’s 765LT ran on Toyo R888 tires at the rear.

Weather variables like air density and density altitude were not optimum, on a better day/location they believe 8.8s is achievable with similar motor settings.