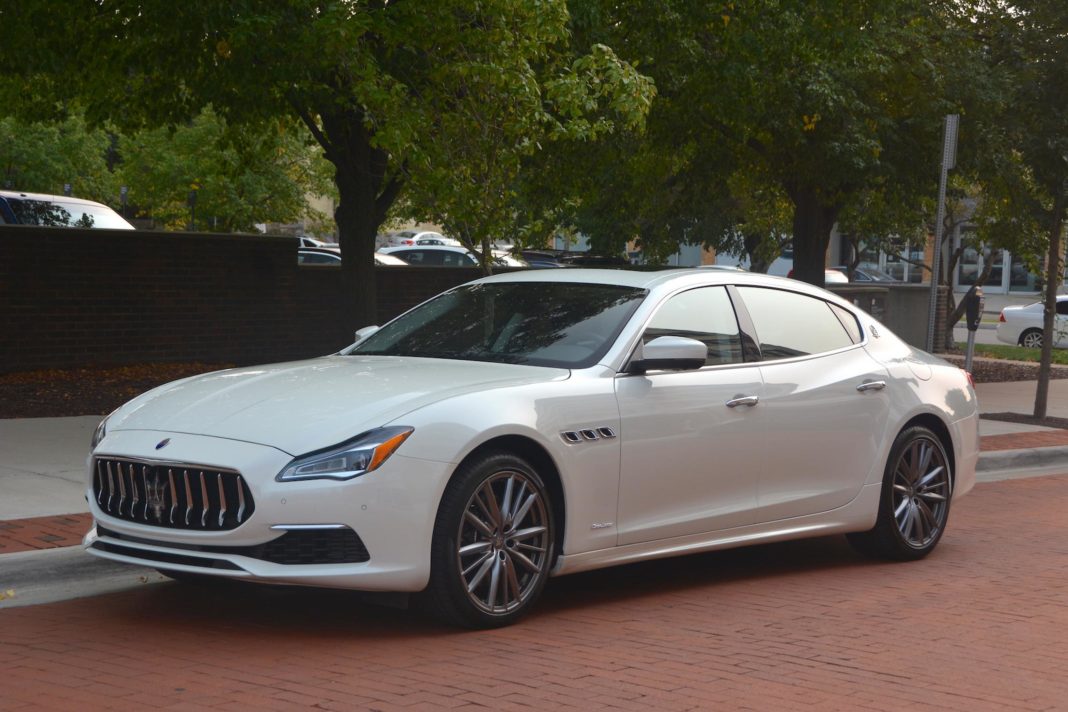 Originally introduced back in the early sixties, the Quattroporte is now in it’s sixth generation, with this current generation having been introduced way back in 2013. Mind you, it’s had a light refreshening, but has it really been that long already? It’s hard to believe, since the design still looks so fresh and elegant. Maserati was kind enough to loan us a Quattroporte S Q4 recently, a car we’ve been looking forward to driving for some time, especially after driving the Ghibli a few months ago, and it was interesting to compare the two cars.

It bears a striking similarity to the Ghibli. Indeed, only the most observant will notice the minute differences between the two cars. A lot of design cues – the stylish front grill, headlights, hood, engine vents – appear to be shared between the two models, the biggest differences being the sweep of the lines on the rear flanks of the two models. The Ghibli has slightly more complex and exciting curvature in it’s rear flanks while the Quattroporte has a more elegant sweep of the fender line from the front wheel arches to the rear tail. The Quattroporte is also nearly 7” inches longer through the wheelbase than the Ghibli, though the two share the same platform. There’s a lot to like here.

Like the rest of it’s brethren, it immediately stands out as something special. The degree of detail in the design instantly sets it apart from other luxury sedans. As you’d expect from a refined Italian design, the combination of curves and hard sharp lines give it a formal but stylish look; sporting but refined. It looks fast parked in the lot, like it’s capable of respectable speed. Pro Tip: It is. Ours arrived in Alpine White, a color that highlighted the sheet metal details quite nicely.

Inside is a luxurious cabin that leaves you wanting very little. A blend of rich black Pieno Fiore leather, alcantara, and Radica wood trim greeted us. It smelled quite wonderful and it felt very refined and very expensive. The GranLusso is more focused on luxury appointments while the GranSport is more focused on sports appointments. Had we received the GranSport to drive, it would have been trimmed with carbon fiber rather than the black wood that our Quattroporte came with. The electrically-adjusted seats were decently bolstered, both ventilated and heated, and the leather-wrapped wood steering wheel was heated as well. 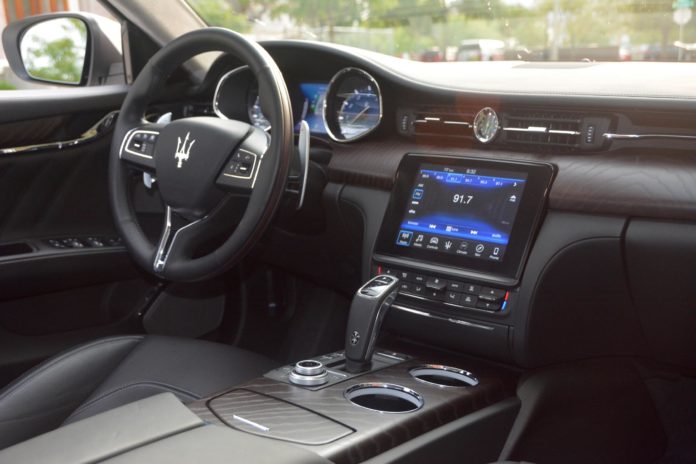 The optional executive-grade rear seats were also individually-adjustable and ventilated and heated as well. And unlike the Ghibli, there’s plenty of room to stretch your legs out in the back seat. The Quattroporte is designed as a true four-passenger sedan and it makes good use of the seven extra inches in it’s wheelbase. There’s even quad-zone climate control to keep each passenger happy.

Alongside the electronic shifter on the center console are Maserati’s electronic driving mode buttons: Traction Off, Auto Start-Stop Off, I.C.E, Sport, and Sport Suspension. The interior evoked such a refined sense of decorum in us that we actually kept ourselves from simply stomping on the accelerator and doing doughnuts in the parking lot, though we could have. That is, had we been so inclined. Ahem.

Under the hood is Maserati’s Ferrari-built 3.0L bi-turbo V6, which makes 424 hp and 428 lb-ft of torque. It’s hooked to Maserati’s 8-speed automatic transmission, which includes shifting paddles behind the steering wheel, which puts it’s power down through Maserati’s intelligent Q4 AWD system. Under normal circumstances, most power is transferred to the rear wheels, but the system will transfer as much as 50% to the front wheels as it deems it necessary. We saw from a dash display that it was working but it’s operation was completely invisible and behind the scenes. We never felt it working, as it should be.

The Quattroporte rode on 20” silver Perseo wheels, wrapped in Pirelli tires. Behind them were drilled 14.2”/13.8” brake discs front/back, clamped by black calipers with the Maserati script on them.

The suspension was Maserati’s electronically-adjustable Skyhook suspension system, which firms up when you engage Sport mode and constantly changes it’s damper rates based on many different criteria such as speed, quality of the road, etc. 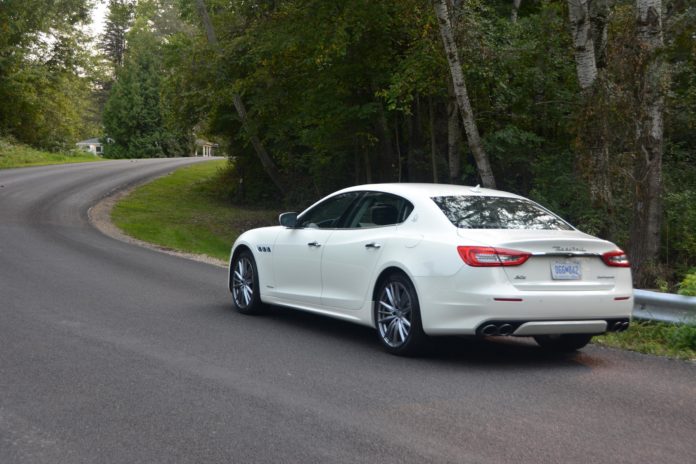 Approach the car and the fob in your pocket unlocks the car for you. Open the door, climb inside, settle into the driver’s seat and you immediately feel like you’re in a very stately, refined car. The Maserati trident emblem is everywhere: The steering wheel, the dash, the clock, the controls, the seats. There’s no forgetting what you’re in. The seats are very comfortable. Reach out with your left hand and press the Start button to the left of the steering wheel and the V6 starts right up, idling smoothly and quietly. Pull your safety belt across you and buckle it in. Set your foot against the brake, grasp the electronic shifter with your right hand, pull the trigger on the front of it, and pull the shifter back until “D” lights up on it. Let off the brake and you’re on your way. It’s a little stuffy in the car due to the weather so we reduce the temperature on the automatic climate control and turn on our ventilated seats. As the cool air permeates the thin air pocket between yourself and the leather seat, you smile and relax.

One of the things we liked best about the Quattroporte was the quietness. Unlike other luxury brands (looking at you, Lexus) there was very little road or wind noise that transferred through into the cabin. Just the steady quiet purr of the engine and whatever we were listening to on the quality Bowers & Wilkens sound system.

The ride is very soft, and a bit floaty on some roads, but it absorbs bumps and potholes well. Press the Sport Suspension button and you can feel it firm up some but it never becomes what we’d call “sporting.” It’s just a firmer version of soft, better controlled than base-level soft. The ride in the back seats is just as comfortable. We’ve been in cars whose back seats present a drastically different ride quality than the front, but Maserati have provided excellent comfort in both rows.

Through curves and corners, the Quattroporte S Q4 leans a bit but controls the body movement of the car very well and sets up quite well as it’s entering it. It can be tossed into a corner at speed and will capably and confidently handle the corner while providing a comfortable ride.

The bi-turbo V6, the same as is found in the Ghibli, provides effortless power with torque arriving early and no great lag in the turbo’s performance. It provides excellent and immediate passing speed and is capable of pinning you back in your seat under full power. According to Maserati, it’ll accelerate to 60mph in roughly 5 seconds and reach a top speed of 179 mph. We don’t doubt that at all. It does a great job of moving the large heavy car very quickly. While we always prefer the largest engine available – and the incredible Ferrari-built 3.4L bi-turbo V8 is available on the GTS – the bi-turbo V6 does a fantastic job in this platform and it sounds AMAZING. With the exhaust valves open in Sport mode, the engine growls and snarls and downright roars when you push it.

The paddle shifters are wonderfully immediate and do a great job but honestly the car doesn’t encourage you to drive it that hard. It’ll allow you to, but everything about it’s interior encourages a more refined touch. “Let the transmission shift itself,” it seems to whisper. “Relax and enjoy the ride.” And you can’t help but agree.

If you need to stop, the brakes get the job done with minimal fuss. They bring the 2-ton car to an abrupt halt in almost no time with little sweat. Brake feel is decent and modulatable but there was a fair amount of squishiness and sudden grab in our brake pedal. It simply required a different approach when braking, knowing to expect the grabbiness.

Fuel efficiency was decent – not stellar or dismal. About where we expected it to be, given our heavy right foot. Had we been a little gentler on the throttle, it probably would have been a lot better.

Maserati offers the Quattroporte in a few different trims. The base model, the S GranLusso model and the S GranSport model, and the GTS which comes with the incredible bi-turbo V8 and the chassis to handle it. Next year Maserati will offer the Trofeo model, which will offer the bi-turbo V8 and a Corsa (race) mode. While we were quite pleased with the GranLusso, we hope to drive the Trofeo when it’s available and report back.

The Quattroporte S Q4 GranLusso starts at $113,690. A couple nice options later and our car came in at $127,510. That’s a lot of money but we feel that it’s worth that. Plus, you’ll have something that sharply contrasts with the sea of cookie cutter cars on the road today. Maserati’s aren’t the common choice but everyone certainly takes notice of them and recognizes and respects the name. 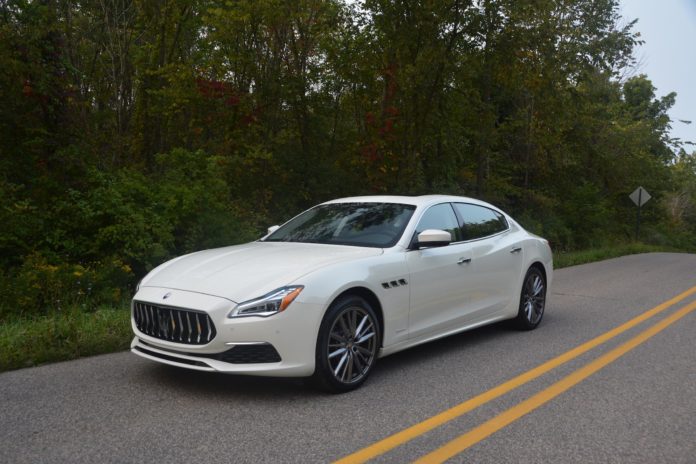