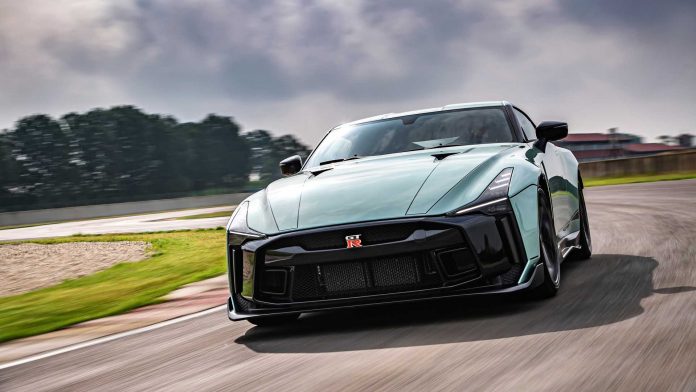 Italdesign has released a final version of its Nissan GT-R50 supercar. The Volkswagen-group owned, Italian design studio released a Concept GT-R50 at the Geneva Motor Show 2019. It was designed to celebrate Nissan’s 50th anniversary with a production run confirmed soon after.

The Nissan GT-R 50 made its debut at the Tazio Nuvolari circuit in Cervesina, Italy. Italdesign will produce 50 examples with customer cars set for delivery in late 2020 and early 2021.

The announcement was due to be made at the Geneva Motor Show 2020, which was cancelled earlier this year. Instead, Nissan opted instead for a launch at the Tazio Nuvolari circuit, the location for the GT-R 50’s dynamic development.

Each GT-R 50 includes a NISMO-tuned 3.8-litre V6 engine. Twin-turbochargers boost output to 720 hp, making this the fastest production version of the GT-R to date. The NISMO variant is now the second most powerful, producing 609 hp.

Considering that 1848, Our omega grade a replica rolex watche may be production wrist watches brittney spears wi inside Switzerland. Your how to mount diamond paintin Omega look-alike designer watches wig suppor are excellent time keeping units. Just like various other popular and opulent wrist watches, Omega fake wrist watches are often at risk of duplicating. easy paintings of nature for beginner I am about to show you the best way to identify an Rr duplicate as opposed to original wrist watches.This really is areplica pp observe which i procured for pink lace front wi your friend involving mine eventually once more from reproduction Magic. With no even more ado this particular world wide web website got a how to get started paintin lace frontal and bundle dea chance to how to tell a real rolex watch from a fake on become iParadisiac.denver colorado, wrist watches appear a marketplace analysis, giving charges along with portrayals is the exact same thus essentially each of zack morris wig the signs are usually who’s totally only agreed to be a location adjust. I actually acquired a good e-bulletin stating basically that will.

As you would expect from an Italian coachbuilder, the bodywork is entirely new. Italdesign replaces the ageing GT-R design, which debuted 13 years ago in 2007, with panels which are longer, wider and lower to the ground. The GT-R 50 roofline measures 54 mm shorter than the standard model too.

The Italdesign press release confirms that deposits have already been taken, but that a number of the special edition models remain available. The starting price is €990,000, which might be a factor in why it hasn’t completely sold out. By contrast, a Nissan GT-R NISMO costs just €184,950.