This year, the competition revolved around a number of automotive milestones. Bentley’s centennial saw four dedicated classes of the most desirable vintage examples. Zagato’s centennial also warranted a unique class. While there was a celebration of Bugatti and classic American hot rods.

Alongside the competitive Concours lawn, a separate concept lawn displays some of the best contemporary examples of the automobile.

The Talbot-Lago eventually won the Gwenn Graham Most Elegant Convertible award, while the Strother MacMinn Most Elegant Sports Car award went to a 1956 Ferrari 250 GT Zagato Berlinetta Speciale. Another coveted award, the Chairman’s Trophy, went to a 1968 Howmet TX Coupe.

Over at the concept lawn, the newly revealed Lamborghini Aventador SVJ Roadster 63 was on display alongside concepts from the likes of fellow Volkswagen Group brands Bugatti and Bentley. Pagani was represented by the first and the latest; an original Pagani Zonda C12 and a brand new Huayra BC Roadster.

Elsewhere, Bugatti had a stand showcasing pretty much all of its models, from early Type 56 to the latest Bugatti Centodieci. 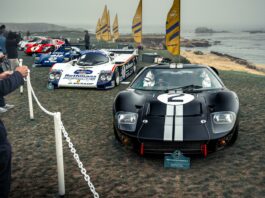