Aston Martin’s brand new V12-powered GT hasn’t been roaming the roads for long until we caught wind of what is assumed to be the first Aston Martin DB11 crash on record. The first DB11 crash occurred in Mexico after a harsh confrontation with a Fiat 500 so it seems.

Judging from the photos the crash seemed rather serious, as there’s little left of the grey DB11’s right front. If the wheel has indeed snapped off, the owner might be looking at a rather costly repair bill that could involve replacing the entire front axle.

From the looks of it the occupants of both cars seem to have made it out fine though, which of course is most important. But who would’ve thought that a small Fiat 500 could be this rock solid? Damages on the small Italian hatch don’t seem near as serious as those suffered by the DB11!

The photos are courtesy of SupercarsVRZ 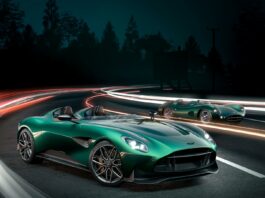