Seven Car Lounge in Saudi Arabia currently has a spectacular Maserati MC12 up for sale. The car has an asking price of US $2.2 million and is likely one of the lowest mileage MC12s in existence.

Since rolling out of Maserati’s facility in 2008, it has driven just 250 km. As with almost all other MC12 models, it is painted in a combination of pearl white with blue accents like the headlights, rear wing and fascia as well as the lower body panels. It also features the standard silver wheels with one side including blue centre locks while the other side has red centre locks. Inside, the car is adorned in dark blue leather and includes a number of carbon fibre elements.

The Maserati MC12 is of course based around the Ferrari Enzo but unlike the Enzo where 400 units were produced, just 50 examples of the MC12 were created. Each of the road-going models is powered by a 6.5-litre V12 engine sourced from the Enzo, with a total output of 620 hp and 652 Nm of torque. It can do nought to 100 km/h in 3.8 seconds and a maximum of 330 km/h, certainly no slouch by any standard. 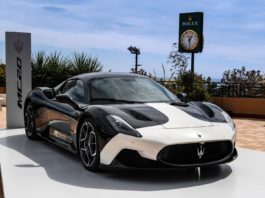