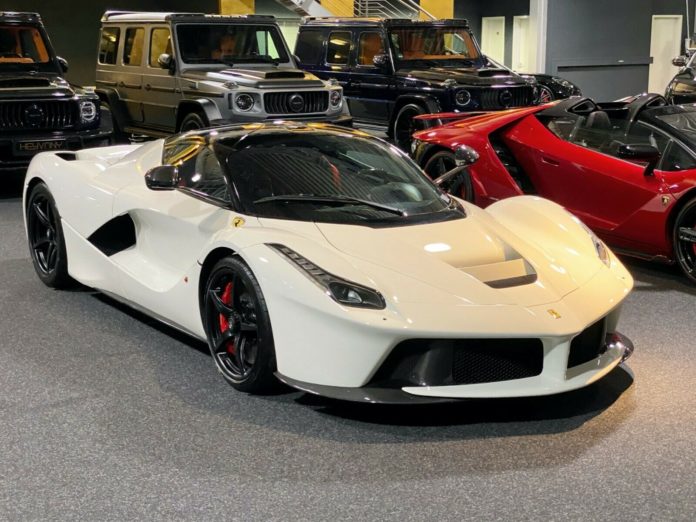 A new Bianco Fuji Ferrari LaFerrari has been listed for sale by a German tuning company known as Keyvany. The car still has the factory mileage it had when it was delivered new in Germany.

Finished in a unique Bianco Fuji exterior (white) over black alcantara interior and red seams, the hypercar comes with a checkbook that has been maintained since its delivery. Meaning service was done regardless of its undriven status during its life in storage. The LaFerrari coupe production ended in 2016 just before the Aperta production commenced. It’s not unusual to find new examples listed for sale by owners who bought them for investment purposes.

This particular car has only had one owner and has remained in Germany ever since it was delivered. Only 500 LaFerrari coupes were made between 2014 and 2016, and only a handful of them were finished in Bianco Fuji, with most buyers opting for the regular Rosso Corsa finish.

The LaFerrari is powered by a 6.3L V12 naturally aspirated engine assisted by one electric motor and KERS. It was the first ever hybrid Ferrari and has a combined out of 950hp that is entirely sent to the rear wheels via a 7 speed DCT.

It’s currently priced at €3,400,000 which is a little higher than current market price, but you also get a new LaFerrari finished in Bianco Fuji.

White LaFerrari for Sale
1 of 12