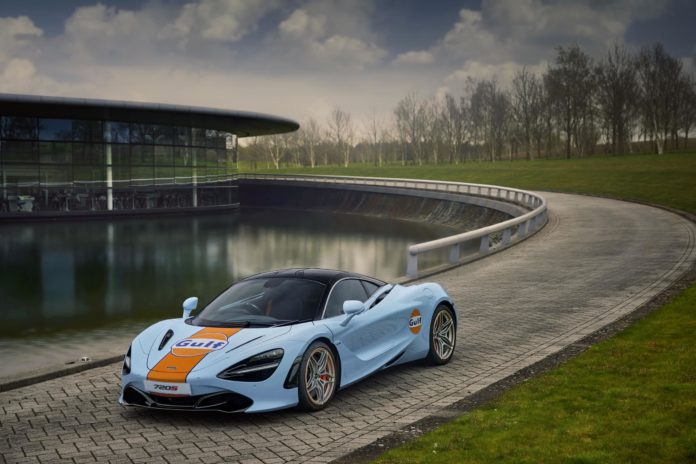 The project is part of the renewed relationship which was made public last summer between McLaren and Gulf as partners and as an official strategy in demonstrating the customization possibilities available for McLaren supercars.

The 720S is powered by a twin-turbocharged V8 engine producing a maximum output of 720PS and 770Nm of torque. The acceleration from 0-100km/h is achieved in 2.9 seconds and the top speed is limited to 341km\h whereas the dry weight of the vehicle is 1,283kg.

Gulf has become the preferred lubricant supplier for McLaren automotive since the partnership, all McLaren vehicles are now to be fueled with Gulf oil and fuel optimized for the high performance engines.

A limited number of customers will have the opportunity to have their McLaren vehicles hand painted exclusively by MSO in Gulf livery. The 720S is the high point project between MSO and Gulf to ensure a range of metallic and solid paints and finishes capture both identities.

To create the perfect finish for the vehicle, McLaren automotive partnered up with AkzoNobel’s pallet to create premium automotive paint hues. The definitive version alone took 20 days to finish.

In addition to the Racing Blue and Orange colors used on the Exterior body, the vehicle also features Gulf solid Orange on the brake calipers and matching blue and orange stitching in the bespoke interior. The interior also features gulf logos embroidered on the headrests and painted on the sills and a McLaren steering wheel with a centre band in Gulf solid Orange and Blue to match the exterior carbon fibre spokes.