Over the last few years, we’ve had the opportunity to drive just about every iteration of Genesis luxury car they’ve introduced, from the limousine-like G90 to the sporty G70 and we’ve been impressed with them all. Hyundai, which the world once viewed as “entry level,” has given it’s luxury brand a free hand and Genesis is making better built and better thought-out cars than Lexus. The GV80, their first SUV, is no exception.

Available as a 2.5T AWD, a 2.5T RWD, and a 3.5T AWD model, we opted for the most sporting of the bunch – the 2.5T RWD. Three trim levels were available on the 2.5T RWD, Standard, Advanced, and Prestige. We opted for the Prestige, because hey – who doesn’t love bells and whistles? So Genesis dropped off a Cardiff Green Metallic 2.5T RWD Prestige for us to spend some time with. Like any Genesis, we immediately wanted to do a cross-country road trip with it as the comfort level lends itself to road tripping so well, but with over a foot of snow and freezing temperatures, we stayed local and safe. 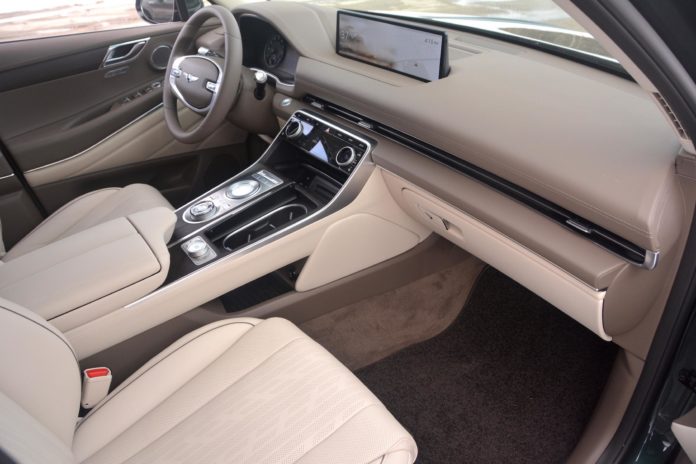 It has a very fresh look to it. There’s an underlying hint of aeronautic inspiration to the design that we liked. The large front grille appears to mimic the spread wings of the Genesis badge above it; the split double-headlights and split side-marker faux-vents on the fenders coordinate with the lower front valence intakes for an aggressive and sporting look. They also match up to the taillights, carrying the theme through the entire design. The pinched waist and flared fenders give it a taut, muscular look. In a world of copycat SUV designs, the GV80 stands out like a lit road flare.

Inside is, as expected, the Genesis luxury we’ve come to expect – but we weren’t expecting this degree of luxury. The GV80 has a jeweled interior that is both inviting and tantalizing. The kind of interior you only find in the most expensive cars. From the satin-chromed switchgear to the jewel-like machined-aluminum-wrapped lucite knobs, the GV80 is full of thoughtful design cues and embellishments. Accent lighting lines run throughout the cabin. Dark woods line the center console. The leathers are top-notch and the stitching is nearly perfect. The seats are comfortable, as well as part of the climate system being heated and ventilated. The infotainment system is easy to use and has an enormous screen on the dash that also displays beautiful misty landscape scenes when not in use, giving a sense of serenity and a calm appreciation for nature. It lacks third-row seating but that’s fine – there’s really only enough room for second-row seating and it’s nice to have some legroom and usable storage space. I suspect that will appear in a GV90 model someday soon anyway.

As you can tell by the name, it has a 2.5L turbo-charged four-cylinder engine under the hood, linked to an 8-speed automatic transmission with paddle shifters behind the steering wheel. It makes 300hp and 311 lb-ft of torque. The engine has a great sound to it and moves the 4600 lb vehicle along quite quickly. It’s also a very flexible unit, providing plenty of power in nearly any situation, from leaving a stop light to passing other cars. The eight speeds do their best to make it efficient as well, and it largely succeeds. We only burned through a tank and a half of fuel the week we drove it. 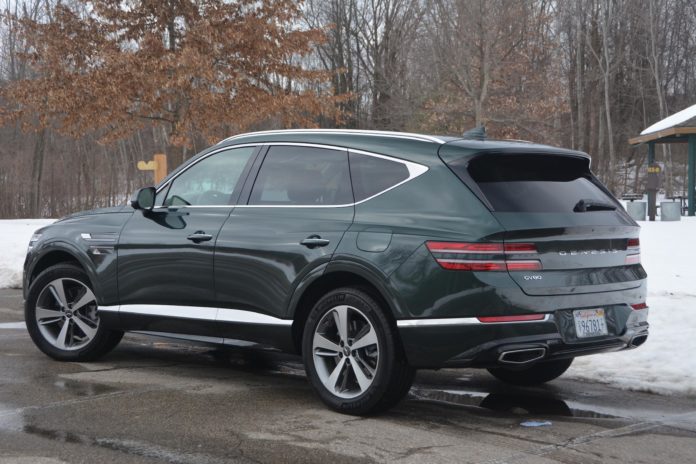 The suspension has a multi-link arrangement in both the front and rear, with a self-leveling system for when carrying heavy cargo. The suspension gives the sizable SUV some moves that you wouldn’t expect and it feels very agile and confident in hurried cornering maneuvers. This is the kind of SUV you could hustle down back country roads exploring the countryside. The brakes are 14.2” anti-lock four-wheel disk brakes and they do a great job of stopping the GV80 from speed, while also giving intuitive feel around town in slow speed settings.

One of the things we’ve always like about Genesis is the little touches you discover as you drive it and live with it. Our favorite new technology has to be the automatic bolsters on the front seats. During spirited driving, the bolsters automatically expand to hold you in place better. As you slow, when coming off the freeway onto an off-ramp or braking for a stoplight, the bolsters deflate to allow you more range of motion. It was a thoughtful touch that made us giggle like kids the first time we experienced it. Or when we got home late and turned the car off in the driveway and the accent lighting strips continued to glow throughout the cabin as we gathered up our things before exiting the car.

Genesis estimates that you’ll get about 25mpg on the freeway and about 20mpg in the city. That’s about what we experienced. Not great but not terrible. Decent for the size and weight of it.

The 2.5T RWD starts at $48,900. The Prestige runs $57,050. Given the prices of today’s cars, and the unique design and fantastic interior of the GV80, we’d say that’s a bargain. Especially for such a safe and comfortable SUV. Beautiful car, Genesis. You’ve created another winner.