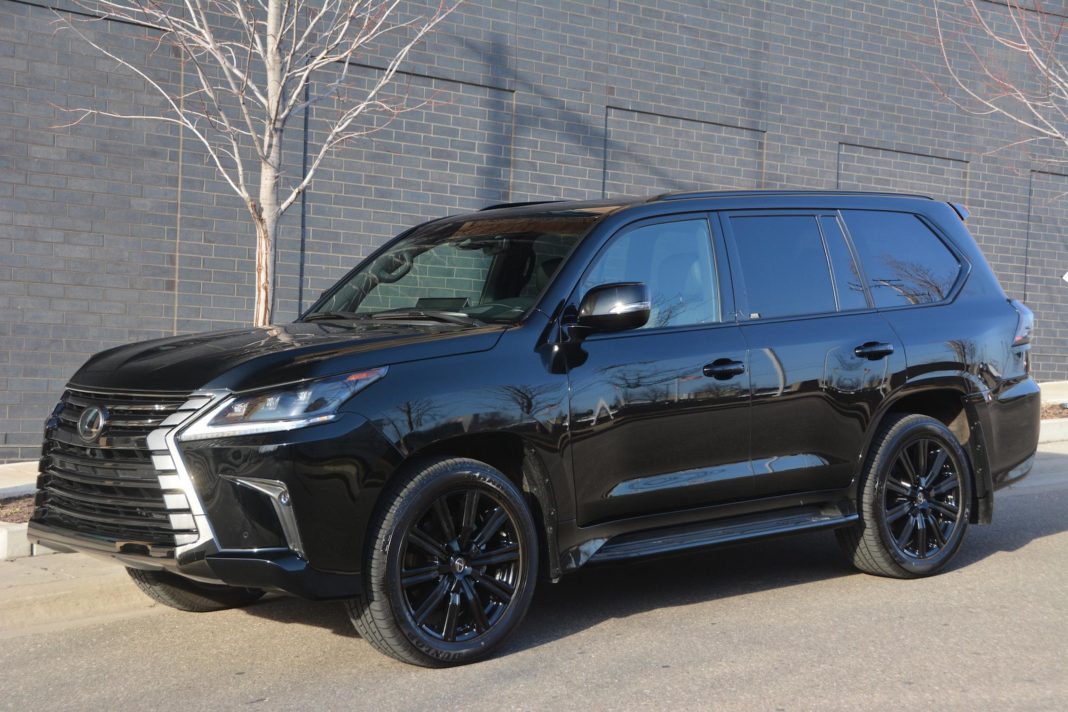 The Lexus LX570 is a gentle bruiser. To look at it, you’d suspect it was up to something – deep, black paint, black wheels, tinted windows – like one of the men-in-black that shows up in the middle of the night to issue a veiled threat against speaking out about something you shouldn’t have seen. Yet it coddles it’s passengers in luxury and a soft, relaxing ride like a dutiful butler working to make his lord more comfortable.

Maybe it’s the monochromatic appearance that makes it look so large. Maybe it’s the third-row seating. Maybe it just IS large. The monochromatic appearance does make a bold statement. Other than a few grey accents and it’s chrome light accents, it’s like a large, mildly-threatening shadow in the night. It rides on black 20” wheels and towers over most other vehicles on the road. 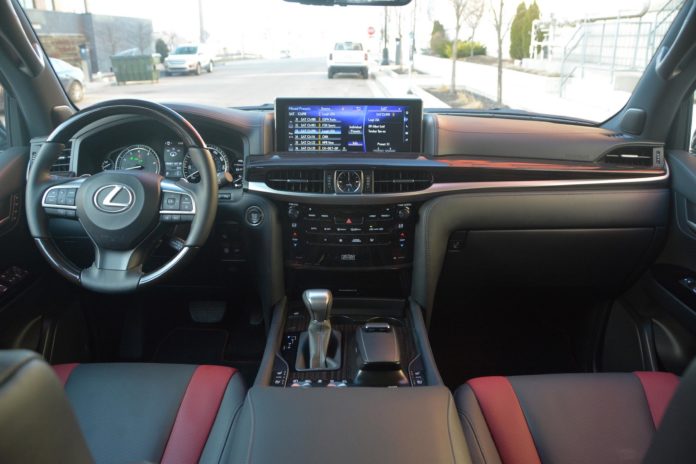 Inside everything is black leather, black plastic, black wood, and black carpet with red leather and satin-chrome accents. The interior is quite comfortable, and once you pull yourself up to the second floor, er- into the cockpit, you find you’re happy to stay there for extended periods of time. The seats are immensely comfortable, electrically adjustable, and both heated and ventilated. On our vehicle, we had the luxury package, which adds heated seating to the 2nd row outboard seats and the 2nd row is power-sliding and the 3rd row is power folding, coming to rest up against the outside walls of the truck. The view of the road and passing landscape is unequaled by anything short of a Peterbilt semi truck or large RV. You look out over other cars down the road into the distance, which gives you a great field of alertness.

There are also some knobs and switches in the center console for switching between 4H (four-wheel drive High) and 4L, as well as hill-descent control, rock-crawling settings, and suspension height settings. I can’t imagine anyone ever taking a Lexus LX570 out exploring Moab or the Rubicon Trail, but if they wanted to they certainly could. The technology is there and at the ready. We didn’t even have snow while we had it so it played the suburban transporter role and it did it magnificently.

Under the hood is a 5.7L 32-v V8 making 383 hp and 403 lb-ft or torque. It moves the enormous truck along decently, though it’s far from sports car territory. It will, however, tow up to 7000 lbs, so there’s that. Its 8-speed automatic transmission is geared for utility – towing, off-roading, and carrying heavy loads of gear. Still, slip it into Sport S or Sport S+ mode and it’ll surprise you but that’s not it’s intended role.

The adaptive suspension with height control does a great job of soaking up bumps and providing a comfortable ride while also giving it some adaptability in adverse conditions. The brakes are strong and intuitively responsive.

It’s really amazing to me how much technology they’ve crammed into this SUV. Between every comfort device known to man, from the adjustable steering wheel to quad-zone climate control; every ride-improving device, like adaptive suspension and self-parking programs; to off-road devices like 4-wheel drive and crawl control; to on-road performance devices, like adjustable suspension and sporting engine and transmission programs; and loads of towing and carrying capacity, it just boggles my mind. If you are looking for something that goes anywhere and does everything and even includes an cooler for beverages in the center console, look no further – the Lexus LX570 is probably your truck. It’s an amazing amalgam of technology.

What it doesn’t do so well is conserve fuel. Lexus estimates that you’ll get about 16 mpg on the highway and 12 mpg in the city. That’s about what we got and with it’s large fuel tank it easily requires $70-80 to fill the tank. But if you want one of the nicest, most capable SUV’s that’s the price you pay. Frankly this is one car Lexus should offer a hybrid of.

The fully-loaded Lexus LX570 comes in at $91,580 before options. After options (heads-up display, luxury package, upgraded Mark Levinson stereo system, Inspiration blackout package, and heated steering wheel), it passes the magic $100,000 mark and comes in at $100,605. I suppose if you can afford that, the fuel economy doesn’t matter quite as much. And you’ll have bragging rights over nearly every other SUV in the neighborhood along with the assurance that even your Jeep-driving, offroad-loving neighbors don’t have any bragging rights you can’t shoot down. An impressive vehicle for sure.