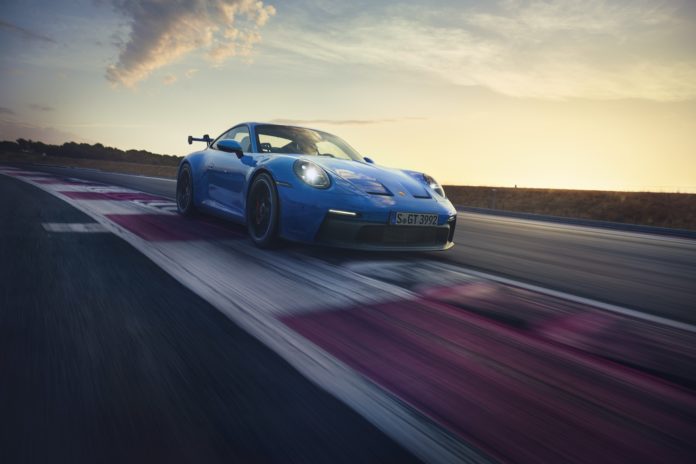 The one we’ve been waiting for – we’ve seen it being tested for months, finally the 2022 992 Porsche 911 GT3 is here. As with its predecessors, the seventh generation GT3 has been developed in close collaboration with Porsche Motorsport. The headlines are as follows: There is still a naturally aspirated 4.0-litre flat-six boxer engine which now produces 510 PS (503 HP) up 35 PS from the 991.2 and 470 Nm (up 10 Nm from the 991.2). The 992 GT3 will rev to 9,000rpm and the testing videos suggest that it will still sound sensational whilst doing so.

With a top speed of 320 km/h (318 km/h with PDK) it is even faster than the 991 GT3 RS. It accelerates from zero to 100 km/h in 3.4 seconds. Porsche will also offer the 992 GT3 with a six-speed manual transmission for a ‘particularly puristic driving experience’. One of the the main points of noted from the preproduction cars was the design of the rear wing and openings on the bonnet.

Porsche say the aerodynamics benefit from the experiences gained from motor racing and generate significantly more downforce without noticeably affecting the drag coefficient. This is mirrored in the similarities between the 993 GT3 and the latest Cup Car. In the performance position, the manually set wing and diffuser elements significantly increase the aerodynamic pressure for high cornering speeds. This makes a significant difference that is reflected in the lap times the 992 GT3 has been setting. The 992 911 GT3 generates approximately 50 per cent more downforce overall than its predecessor, even just in its factory aerodynamic settings.

During final tuning works a the Nürburgring Nordschleife, the 992 Porsche GT3 was more than 17 seconds faster than its predecessor. Development driver Lars Kern took just 6:59.927 minutes for a full 20.8-kilometre lap. The shorter 20.6-kilometre track, which had previously served as a benchmark, was completed by the 911 GT3 in 6:55.2 minutes. These times were set on the aggressive Michelin Pilot Sport Cup 2 R tyres that will be optional on the car. 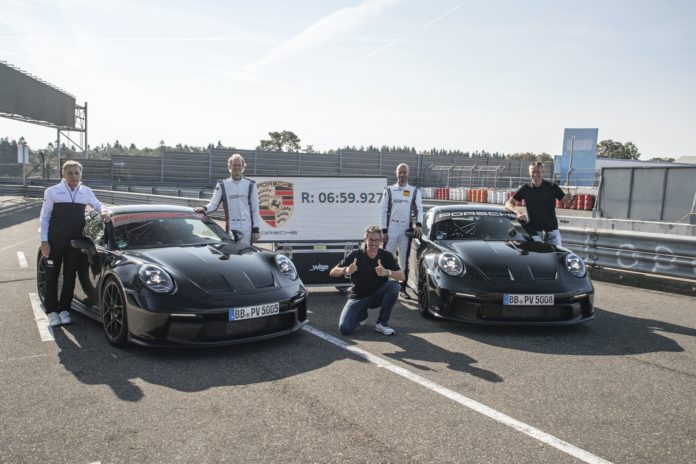 Despite growing in size, Porsche were keen to make sure the 992 GT3 was no heavier than the 991.2 GT3. This is a challenge given the new regulations the 992 has to be built to satisfy. Despite a wider body, larger wheels and additional technical features, the weight of the new GT3 is on a par with its predecessor. With manual gearbox it weighs 1,418 kilograms, with PDK 1,435 kilograms. Lightweight materials have helped to achieve these impressive weight figures.

The front bonnet is made of carbon fibre-reinforced plastic, there are lightweight glass windows, optimised brake discs and forged light-alloy wheels ensure weight discipline, as does the cover for the rear seat compartment. The lightweight sports exhaust system reduces the weight by no less than ten kilograms. With infinitely electrically adjustable exhaust flaps, it harmonises a highly emotional sound experience with the Euro EU6 AP emissions standard.

The most notable change on the 992 GT3 can be found one the front axle. For the first time the GT3 features an intensively redeveloped double-wishbone front axle, inspired by the Le Mans-winning 911 RSR. It offers higher camber rigidity, among other advantages, and relieves the shock absorbers of disruptive transverse forces.

With a diameter of 408 millimetres instead of 380, the lightweight brake discs on the front axle of the new car are considerably larger than those fitted to the last GT3, while weighing 17 per cent less. Like the forged light-alloy centre-lock wheels, they reduce the rotating masses. Rear-wheel-steer has become the norm on Porsche 911s and will be fitted as standard on the 992 GT3. There is ‘Smart Lift’ memory for the front-axle lift system to keep painful scrapes at bay when driving around town.

As will its predecessors, the 2022 992 Porsche 911 GT3 will be offered with the Clubsport package, which is also available for the new 911 GT3 at no extra cost. In addition to a certified roll-cage behind the front seats, it also includes a six-point harness on the driver’s side, a motor sport handheld fire extinguisher, and a battery disconnect switch.

We cannot wait to see the 2022 992 Porsche 911 GT3 and look forward to getting behind the wheel of the latest model to wear the legendary GT3 badge. 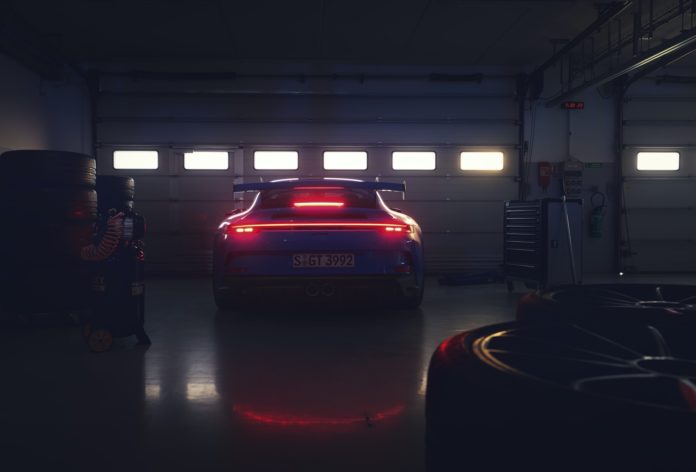