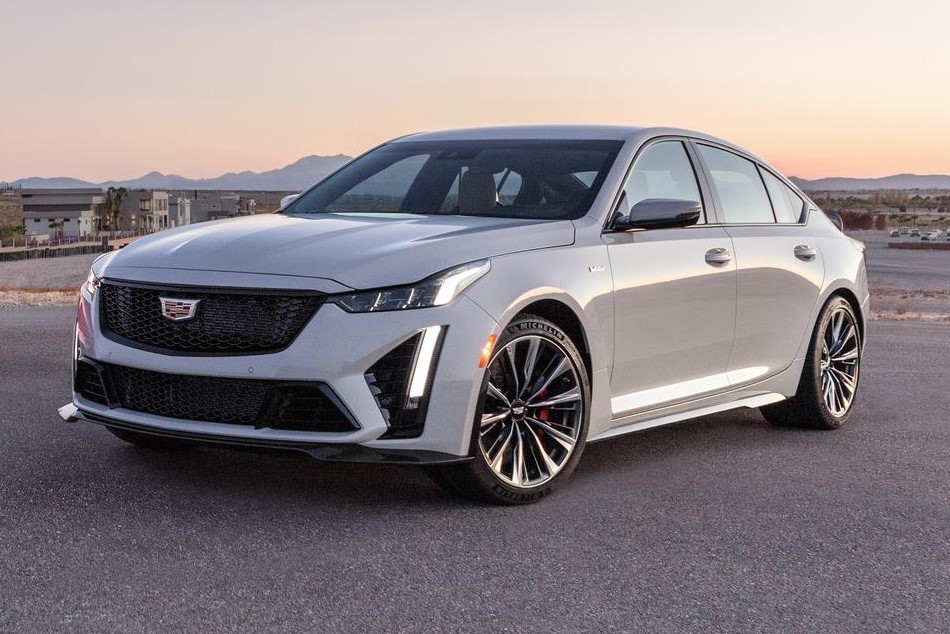 Cadillac has officially released the new 2022 CT5-V Blackwing and CT4-V Blackwing. The V-series Blackwing is said to feature the highest level of performance from Cadillac in regards to power and design.

The CT5-V Blackwing gets a familiar 6.2L supercharged V8 engine. The horsepower is rated at 668hp and the torque at 893Nm due to its improved exhaust system and high flow air-intake – a 46% improvement over the CTS-V. The acceleration from 0-60mph is in 3.7 seconds ( automatic transmission) and the estimated top speed is 200mph+. This makes it the most powerful Cadillac ever made.

It gets the largest factory-installed braking system in Cadillac’s history. There is an additional Carbon-Ceramic brake package available for the CT5-V Blackwing that features cross-drilled rotors, heat management, weight saving and durability while also reducing 24kg in unsprung mass and 28kg in rotating mass. The rotors measure 398x36mm on the front and 373.5×28 on the rear.

The smaller CT4-V Blackwing is powered by a 3.6L twin turbo V6 engine that benefits from improved air-intake system and control systems. The engine has an output of 472hp and 603Nm of torque and an estimated top speed of over 189mph. The acceleration from 0-60mph takes 3.8 seconds (automatic transmission). Here, the air intake is improved by 39% compared to ATS-V, airflow routing volume is reduced by 60% compared to conventional design with a remotely mounted heat exchanger.

The CT4-V Blackwing also features turbocharger compressors marked for peak efficiency at peak power for optimal track performance, manifold-integrated water-to-air charge cooling system for quick torque response and re-targeted piston oil squirters which control engine oil at the bottom of the pistons for better temperature control. The CT4-V Blackwing is said to be the fastest and most powerful Cadillac in the subcompact class.

The CT4-V Blackwing has track-capable high-performance braking systems and rotors. The rotors measure 380x34mm on the front and 340.5x28mm on the rear.

Both cars have a manual transmission as standard for better experience on the track and road. Details include twin-disc clutch for high torque capacity and pedal feel, active rev matching to adjust engine speed and match downshifts, no-lift shift which allows gear shifts while still on the gas pedal, transmission and rear differential cooling for better track performance and shorter shifter ratio for more precise shifts.

Both V-Series Blackwings are available with an optional 10-speed electronically controlled automatic transmission which is tuned for dual-personality in each model. These include tapshift/manual mode, sport mode, unique pan oil design and priority valve changes. Control systems with performance calibrations are also available, the ten forward gears ensure optimal rpm bands in the engine, while the dynamic performance mode activates autimatically when high-g forces are experienced in track or sport mode.

The cars come with the fourth generation Magnetic Ride Control ( MR 4.0) with an improved front and rear suspension system. The V-Series Blackwings are also fitted with Michelin Pilot Sport 4S tires for improved balancing and handling of the track and road.

Pricing begins at $59,990 for the CT4-V Blackwing and $84,990 for the CT5-V Blackwing. Rivals of the latter include the E63 S AMG, Dodge Charger Hellcat, BMW M5 Competition and the newly revealed CS as well.