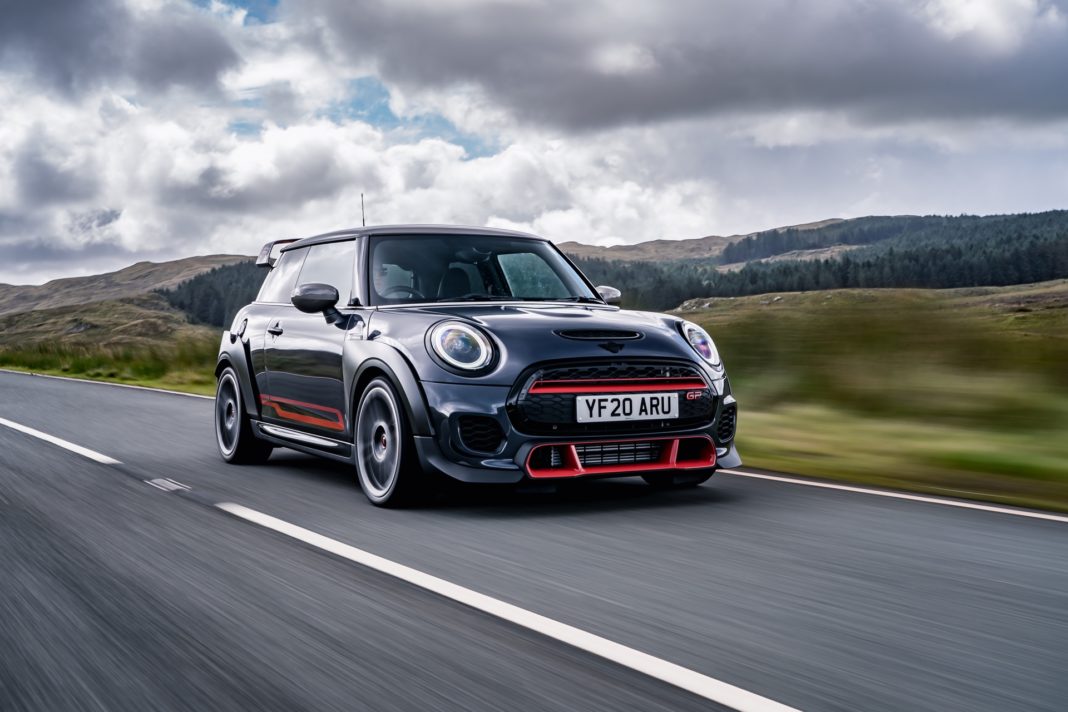 There are few things as exciting as a naughty little hot hatch. There is something cheeky about taking a small car and pumping up the power to deliver accessible thrills on the road. Supercars are all show and no go in a world of poorly surfaced roads, speed bumps and narrow lanes. Other road users won’t turn their noses up at you in a hot hatches and they make sense with modest power figures and relatively modest price tags.

As a result I was giddy with excitement when Mini unveiled the Mini John Cooper Works GP3 with its crazy carbon body extensions, giant wing, the news that it packed a mighty 306 horsepower and that just 3,000 units will be produced – my time to drive the pocket rocket could not come soon enough.

Walking up to the Mini GP3 is an occasion in itself. The car looks like someone sent the blueprints of a base Mini Cooper to an 8-year-old and told them to go crazy with the crayons for their evening homework. There are vents, extensions and wings everywhere you look. I love that it is fit to reside in a mental asylums underground car park, but can understand that your grandmother may be a little embarrassed emerging from the passenger seat outside the bingo hall. Stepping in, things are just as bonkers. There are bucket seats with huge bolsters to hug you, and that’s where the seats end. The rear ones have been removed, replaced by a cavernous space and a red beam which serves no purpose other than to look cool.

Under the fake-grill garnished hood there is the powertrain from the most recent BMW M135i shoehorned into a Mini body. The 2.0-litre turbo 4-cylinder engine sends 306hp and 332lb ft through an eight-speed automatic gearbox. Where the BMW and other hot hatches such as the Mercedes-AMG A35, Audi S3 and VW Golf R, the Mini features no four-wheel-drive trickery. Instead, all the power is sent to the front wheels via a limited-slip differential.

Other changes include 10mm lower springs, beefier brakes and the GP style wheels. The plethora of visual changes are all style and very little substance as it is not stated that there is any aerodynamic benefit or downforce. At 1,255kgs, it is light, but not mind-blowing given its size and when you consider that half of the interior is missing.

Enough on the details and specs, time to drive it. First impressions were that the gearbox feels lethargic, real hot hatches need manuals to be as riotous as they should be. Into the first bend the gearbox decided not to give me the downshift I requested, frustrating, but let’s move on. Turning in, the grip was mighty as was the lack of any conceivable body roll, it just stayed flat. The trade-off of such body control makes itself apparent when I turned onto the first country road on my route. The ride is beyond harsh. I can understand a GT3 RS or Mercedes-AMG GT R being hardcore, but in a Mini? It was one trait I could not put to the back of my mind. Under heavy throttle there was torque steer and the differential felt overwhelmed on many occasions, wildly sending power haphazardly seemingly giving the steering a mind of its own and making me work to keep the car heading in the intended direction.

The Mini GP3 is amusing. The exhaust it loud, not particularly tuneful, but it will make you smirk and the body control had me turning into corners at scarcely believable speeds. Behind traffic, I turned my attention to the interior which does feel special. The seats play a big part in this, the rest of the cabin is funky Mini with functional BMW switchgear scattered around the place. The iDrive system is good, as is the rather odd looking instrument binnacle.

The Mini GP3 is an exciting car, unfortunately to the detriment of the usability and driver satisfaction. It feels blunt, angry and not particularly rewarding. I left the driver’s seat wishing it wasn’t as powerful as it is, was a touch softer and had a manual gearbox as both of its predecessors had. I wanted to love it, I enjoyed that it was a challenge, but it isn’t a car I am left yearning to have the keys again.