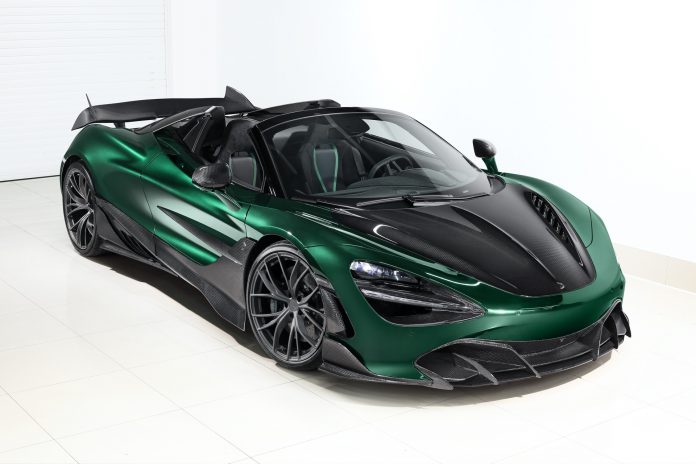 TopCar has become known for its work on the Porsche 911 and the Porsche Panamera. In recent years, TopCar branched out with packages for Mercedes-AMG models. More recently, a package emerged for the Lamborghini Urus. The expansion continues with the McLaren 720S Spider.

TopCar’s modifications are quite extensive. Whereas their 911 packages tend to be understated, their 720S Spider package is extreme. There is plenty of carbon fibre on display. TopCar adds more than 50 parts, combined with a deep green finish.

The changes include a new front facia with a front skirt insert, a multi-piece spoiler lip and a new front panel. The bonnet is new with deeper air intakes. At the side, extensive carbon fibre panels have been added, giving the 720S Spider a completely new look.

At the rear, the changes are meant to reflect the shark on the TopCar logo. The modifications include a new rear diffuser, trims for the engine plus a rear wing with two fins. The wheels are TopCar Fury style measuring 9×20 inches at the front and 11.5×21 inches at the rear.

The interior receives a full leather and Alcantara refit with new elements in black and dark green. The carbon fibre additions to the door sills show the name “Fury” and the TopCar logo when the door is open.