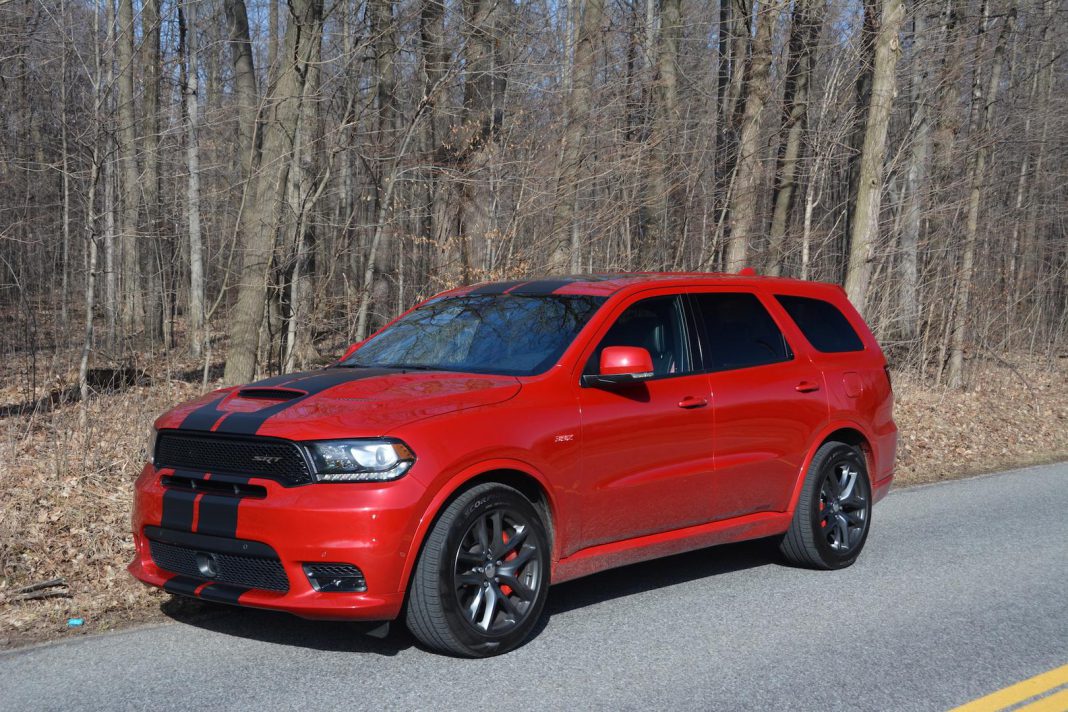 The good folks at FCA have developed quite a reputation for engineering solid sporting SUV’s, and while I was initially skeptical that any SUV could actually be entertaining to drive, I have been impressed and I have been converted to the dark side. After tuning the rest of it’s lineup, SRT has decided that it’s now the Durango’s turn to be tuned and hot-rodded. Dodge has been making the big Durango for quite a while now.

It enjoys a reputation as a comfortable and solid family hauler and as well as a capable tow vehicle. Something comfortable in which to take six other people to the beach while towing the family motorboat. It hasn’t exactly been anything that a sporting enthusiast would be interested in, other than for towing the race car out to the track on the weekends but that’s all changed with the introduction of the Durango SRT 392.

“It’s not exactly subtle, is it?” a friend asked when I showed up at his house with it.

No. No it’s not. Exactly. The Durango SRT 392 is a very large vehicle. And painted up in Redline Pearl paint with twin gunmetal gray racing stripes stretching from front bumper to rear bumper, it gets noticed. Even if you were blind, you’d still hear it a mile away. No, “subtle” is not the world I would use either. But it IS attractive. The Durango has a nice design – very clean and smooth – with muscular lines around the fenders. The additional SRT design features make it much more aggressive than the rest of the Durango line. The large grille, the enormous hood intake, the huge vents. So much so that when driving down the freeway, traffic tends to move quickly to the right in order to let you through. The big aggressive design pays off.

The outside isn’t the only part that’s large. It’s massively spacious inside too. Enough that even a large guy like me felt quite comfortable in it’s roomy cabin. How big and spacious is it? Well, I may or may not have called it a “bus” more than once while referring to it. Not only because it’s big, but also because the view through the rearview mirror is of row after row of seats before you even see out the back window. Besides the driver and passenger seats, there is a middle-row that can seat three. Then, waaaaay out back, is a third row of two seats that are better left to children. Beyond that is a cargo area about 2-1/2’ long and the width of the vehicle. 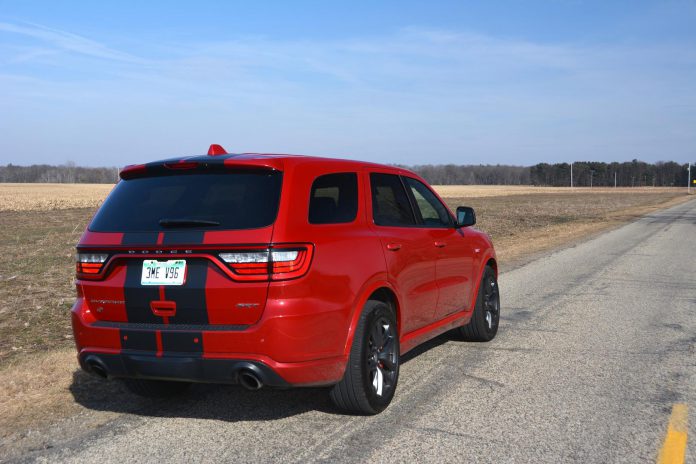 The far back seats fold flat, creating a ton of extra storage space and you can also fold down the second row of seating, which opens up an immense amount of storage space. So it’s versatile. In the SRT 392, the front and middle seats are heated. The steering wheel is also heated. The front seats are also ventilated for those sticky summer days. Our car had the optional rear seat DVD entertainment system to keep the kiddos quiet on long car trips. If you can’t be comfortable in this car, you can’t be comfortable in ANY car.

Under the hood is…..No, not a Hellcat V8. Don’t be dense. It’s got 392 right in the name. Yes, it’s got a tuned 392 cu. in. (6.4L) Hemi V8 and SRT was wise enough to hook it up to some fantastic exhaust pipes that take the engine’s incredible natural sound and broadcasts them for all the world to hear. It sounds so good that I found myself using the paddle shifters to downshift every chance I got. It can get a little boomy in the cabin from time to time, but if you like beautiful muscle car music, it’s a joy to listen to.

The engine makes 475 hp and 470 lb-ft or torque and it moves the big truck much faster than you’d expect. Just mash the throttle and hold on tight. 0-60 mph in 4.2 seconds? Yep. Faster than you’d expect. Fast enough to scramble your synapses and leave you feeling confused. That beautiful engine is hooked up to an 8-speed automatic transmission, though there are paddle shifters behind the steering wheel that work better than a lot of paddle shifters I’ve used. It feels surprisingly natural to crack off shifts using the paddles as you accelerate. The 475hp is transmitted through the Durango’s AWD system, which gives it stability, all-weather capability, and increased performance. 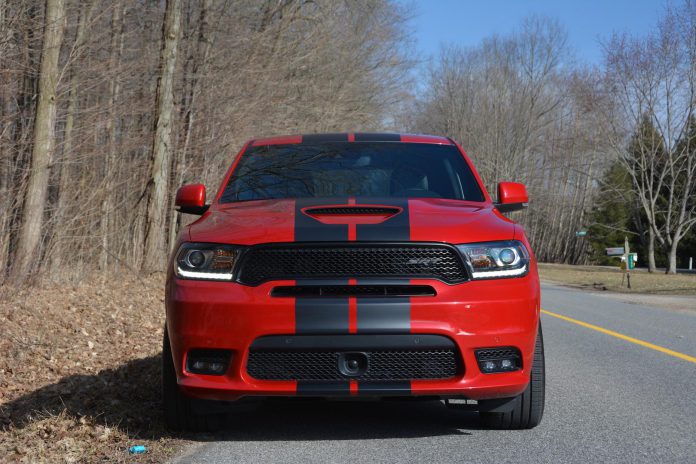 The mileage wasn’t great, but let’s be honest – who cares about mileage when so much performance is available to take advantage of? The EPA estimates 13mpg in the city and 19 on the highway and that’s actually pretty close to what we saw. It’s best if you turn off the mileage display on the dash though so you can enjoy the car.

The suspension is pretty heavy duty, as you’d expect for a vehicle this size, but it also controls the body motions very well. The first time I drove it I got the impression that it was very soft but comfortable. It was only after I started exploring the car’s electronics that I discovered that the Durango SRT 392 has several drive modes available: Auto, Sport, Race, Snow, Tow, Valet, Eco, and Custom. Custom allows you to adjust the suspension, the steering, the stability control, the all-wheel drive, and the transmission response to your personal preference.

Put it in Sport or Race mode and the suspension firms right up making the nearly 3-ton truck feel much tighter and smaller than it really is. There’s still a bit of lean in corners but not nearly as much as you’d expect. I found you can actually hustle the SRT 392 around corners and fun back roads quite competently and capably. Well done, SRT. 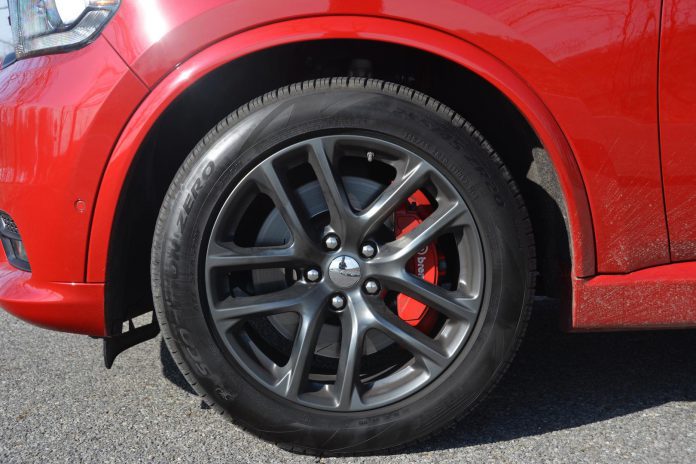 It rides on 20” wheels (10” wide!) wrapped in Pirelli all-season tires. They were sticky enough to keep us from sliding off the road when we were taking freeway cloverleaf on-ramps too fast. You’ll find Brembo performance anti-lock brakes at all four corners and they do an admirable job of hauling the big, heavy Durango down from speed. While I suspect you could work them hard all day on back roads, I have doubts they’d hold up too long on a track day but I could be wrong. I’d certainly like to try some day, that’s for sure.

It’s a very entertaining truck overall. I found myself without any deadlines one cold, windy Friday afternoon, grabbed the keys and headed north to where all the fun roads are just to push it and see how it’d do. I put it in Race mode, turned on the paddle shifters, and headed out. The first 60 miles are all freeway miles and it ate those up without any problem. It’s a superb highway hauler – smooth, quiet, comfortable. It effortlessly devoured mile after mile after mile. Need to pass? No worries.

At 85mph, it’ll gain 20-30 mph in speed in mere seconds and you’ll be pulling back into your lane before the guy you passed even realizes he wasn’t buzzed by an F-35. Once I got to the fun roads, I had an opportunity to really push it and see what it was truly capable of. I was quite surprised by how agile it was through curves, how much speed it could accumulate so quickly coming out of those curves, and how quickly a long straight section of road could be traversed. 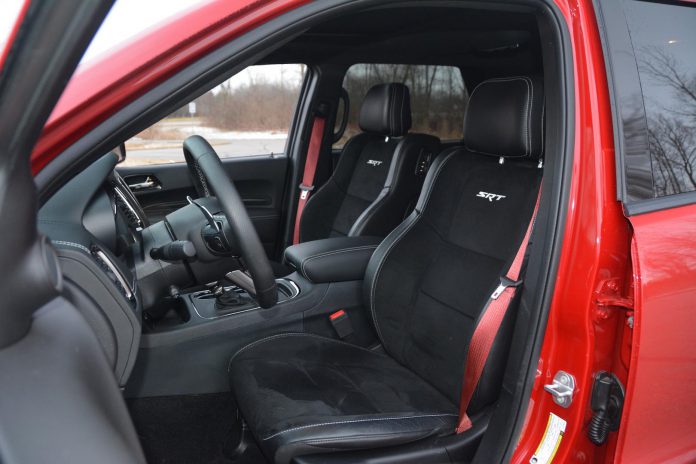 And I remember thinking, as I was wrapping up my drive and settling back into the long freeway slog back home, that this thing was legit. It’s way more capable than I imagined it could be and way more entertaining than I dared hope. I’ve had the opportunity to drive some truly amazing SUV’s over the years – Maserati’s Levante GTS and Trofeo, Alfa Romeo’s Stelvio Quadrifoglio, Jeep’s Grand Cherokee SRT Trackhawk – and I’ve added the Dodge Durango SRT 392 to that short list of magical SUV’s. I’m hearing rumors of a Hellcat-engined version in the works and if that happens, it’s going to be incredible.

The Dodge Durango SRT 392 starts at about $63,000 USD. Ours stickered at $78,000 USD with the options it had, but I’d have been happy with just the base SRT 392. It’s steep, but it’s so capable. If you want a sports car but need a heavy-duty SUV, it’s the perfect intersection between practicality and performance.