The Force India Formula One team is on the verge of being renamed Aston Martin Racing for the 2016 season onwards.

Aston Martin has been eager in recent times to return to the leading open-wheeled racing series in an effort to take on its rivals McLaren and Ferrari. The British marque had previously been in talks with both Red Bull Racing and Williams to return to F1.

The sports car maker was last in the Formula One field in the 1959 and 1960 seasons and with a new team name, the racing outfit is set to adopt a brand new title sponsor in the form of Johnnie Walker. As such, the cars are expected to adopt blue and gold liveries reflective of Johnnie Walker’s branding.

Mercedes, which owns a five per cent stake in Aston Martin has given to go-ahead for the deal to happen.

Understandably, Force India is remaining tight-lipped about the deal and has yet to make an official announcement.

During talks with Autosport, Force India team principal Vijay Mallya said “If tomorrow someone comes and offers me a good sum of money for title sponsorship, I’ll seek the team name.

“f the marque comes along and I have to change the team name, I have to look at what it does for the team in terms of profile. It’s premature to talk about it now, but we’re talking. Nothing is done until it’s done. I don’t like to count my chickens until they are hatched.” 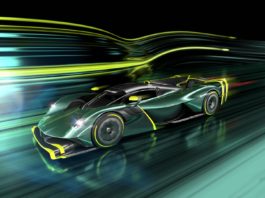 Aston Martin Victor: 1 of 1 Hypercar Built from Vulcan and...