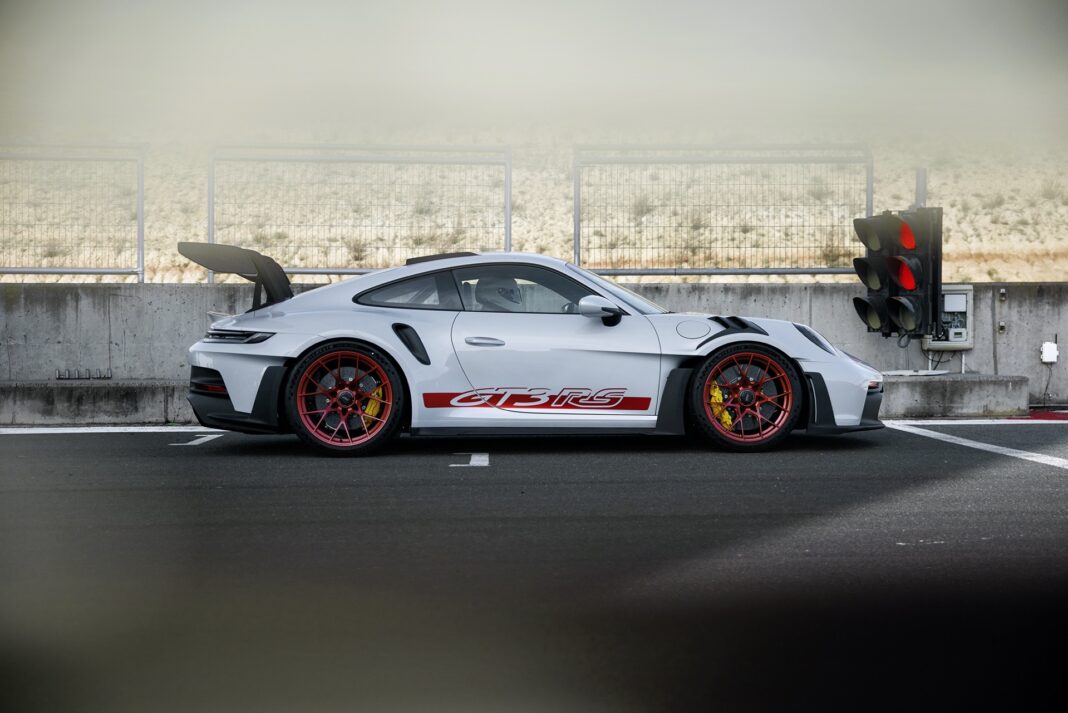 Brace yourselves, this one is wild: it is finally time to officially welcome the 2023 992 Porsche GT3 RS. ‘Isn’t that the race car?’, you may ask. It may resemble a Cup or GT3 R car, but if you’re lucky enough to be offered a slot, you could drive this street legal car with an F1 style drag reduction system (DRS) and the ability to produce 409kg at just 200km/h, to the weekly cars’n’coffee after obliterating lap records at a track day. The GT3 RS is the the GT3 R’s motorsport brother for the road, this is serious business.

Let’s kick things off with the numbers you’ll be scouring the internet to find, the top trumps stats. The engine remains a naturally aspirated 4.0-litre flat six with a 9,000 rpm redline. Max power output up to 525 PS (518 metric horse power) which will launch the 2023 992 Porsche GT3 RS from 0-100 km/h is done in 3.2 seconds and the RS will howl onto a top speed of 296 km/h in 7th gear of the Porsche Dop-pelkupplung PDK box. Lower top speed than a GT3? Correct, that because the RS has been treated to a set of shorter gear ratios. Anyone that has driven or read a review of the GT4 RS will know how exciting shower ratios can make a car, expect the 992 GT3 RS to pull HARD, despite having modest power and 0-100 stats. Air intakes on the underbody ensure that the transmission can withstand even extreme loads during the most intense track sessions. Thanks to an array of lightweight construction measures such as the extensive use of CFRP, the 911 GT3 RS weighs in at only 1,450 kg (kerb weight according to DIN) despite many larger components. The doors, front wings, roof and front lid, for example, are made from CFRP. Lightweight CFRP is also used in the interior, for example in the standard full bucket seats.

Aluminium monobloc fixed-calliper brakes with six pistons each and brake discs with a diameter of 408 mm are used on the front axle. Compared with the 911 GT3, the piston diameters have been increased from 30 to 32 mm. In addition, the thickness of the discs has been increased from 34 to 36 mm. The rear axle continues to be fitted with 380-mm brake discs and four-piston fixed-calliper brakes. As per, there are optional available Porsche Ceramic Composite Brakes (PCCB) which have 410-mm discs on the front axle and 390-mm discs on the rear axle. The new 911 GT3 RS comes standard with forged light-alloy centre-lock wheels. Road-legal sports tyres measuring 275/35 R 20 at the front and 335/30 R21 at the rear ensure a high level of mechanical grip. There is no official word on the rubber in which the GT3 RS will be shod, the images show a Michelin Cup 2 R, interestingly the test cars have also been seen at the infamous tankstelle at The Nurburgring in Pirelli Trofeo RS tyres, something that is yet to be officially unveiled. It is safe to assume that these tyres would have been used by Porsche to see if they could find more lap time than the Cup 2 R in an attempt to set a new official production car time at The Green Hell, all shall be revealed!

So, what does the 2023 992 Porsche GT3 RS have in common with its race car ‘brother’? Well, plenty. The first, and more prominent, example the is the concept of a central radiator – an idea that was first used in the Le Mans class-winning 911 RSR and subsequently in the 911 GT3 R. Instead of the three-radiator layout seen in previous cars, the new 911 GT3 RS relies on a large, angled centre radiator in the car’s nose, positioned where the luggage compartment is located on other 911 models. This has made it possible to use the space freed up on the sides to integrate active aerodynamic elements. Continuously adjustable wing elements in the front and on the two-part rear wing, in combination with a number of other aerodynamic measures, provide 409 kg of total downforce at 200 km/h. This means that the new 911 GT3 RS generates twice as much downforce as its 991.2-generation predecessor (!) and three times as much as a current 911 GT3. At 285 km/h, total downforce is 860 kg. To us, that seems like the standout feature of the 992 GT3 RS, the unbelievable aero figures that dwarf that of even the McLaren Senna. A drag reduction system (DRS) is fitted in a production Porsche for the first time. To achieve low drag and higher speeds on straight sections of the track, the DRS allows the wings to be flattened out at the push of a button, within a specific operating range. The airbrake function is activated during emergency braking at high speeds: the wing elements at the front and rear are set to maximum, creating an aerodynamic deceler-ation effect that significantly supports the wheel brakes. 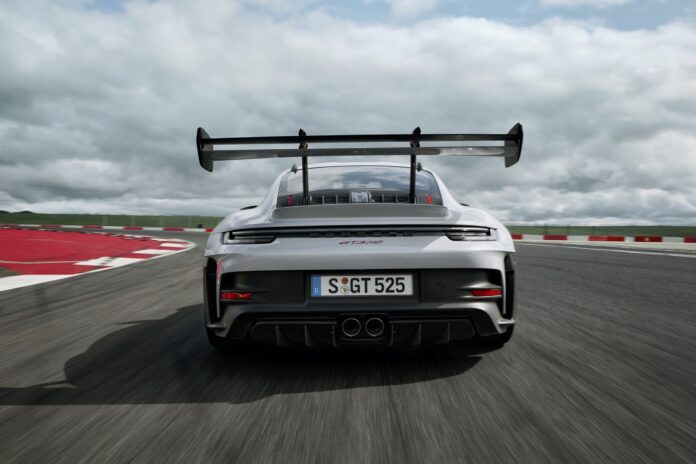 Moving rearwards to one of the most prominent feature of the GT sports car is the swan-neck-supported rear wing, which is significantly larger in all dimensions. The rear wing consists of a fixed main wing and an upper, hydraulically adjustable wing element. For the first time on a Porsche production vehicle, the upper edge of the rear wing is higher than the car’s roof. In addition, the front end of the 911 GT3 RS no longer has a front spoiler, but instead features a front splitter that divides the air flowing over and under-neath. Sideblades accurately direct air outwards. Front wheel arch ventilation is pro-vided via louvred openings in the front wings. Inlets behind the front wheels, in the style of the iconic Le Mans-winning 911 GT1, reduce the dynamic pressure in the wheel arches. Sideblades behind the intake ensure that the air is directed to the side of the vehicle. Air from the centrally positioned radiator flows out via large nostrils on the front lid. Fins on the roof direct the air outwards, ensuring cooler intake temperatures in the rear. In the new 911 GT3 RS, the openings in the rear side panel are used exclusively to improve aerodynamics and not to draw in process air. The rear wheel arch also features an intake and a sideblade for optimised airflow. The rear diffuser comes from the 911 GT3 and has been slightly adapted.

Even the suspension comes in for aerodynamic attention. Because the wheel arches of the new 911 GT3 RS are subject to powerful airflows, the components of the double-wishbone front axle are designed with teardrop-shaped profiles. These aerodynamically efficient links increase downforce on the front axle by around 40 kg at top speed and are otherwise only used in high-end motorsport applications. Because of the wider track (29 millimetres wider than the 911 GT3), the double-wishbone front axle links are also correspondingly longer. To ensure that the downforce balance between the front and rear axles is maintained even when braking from high speeds, the suspension engineers have significantly reduced pitching under braking. On the new 911 GT3 RS, the front ball joint of the lower trailing arm has been set lower on the front axle. The multi-link rear axle has also been adjusted, with modified spring rates. The driver assistance systems and rear-axle steering also have an even more dynamic set-up here.

If you were to peek into the cabin of the 2023 992 Porsche GT3 RS, the element most likely to catch your eye is the steering wheel with its four rotary knobs. The 911 GT3 RS offers three driving modes: Normal, Sport and Track. In Track mode, the basic settings can be individually adjusted. Among other settings, the rebound and compression damping of the front and rear axles can be adjusted separately and in several stages. The rear differential can also be adjusted via rotary controls on the steering wheel. This is done quickly and intuitively with an operating and display concept also borrowed from motorsport: Four individual rotary controls and a button for the Drag Reduction System (DRS) are located on the steering wheel. These rotary controls are clearly displayed via graphics in the instrument cluster during the adjustment process. The 911 GT3 RS also features the track screen already familiar from the 911 GT3. At the touch of a button, the driver can reduce the digital displays on the two seven-inch side displays to essential information only. The gearshift indicators to the left and right of the analogue tachometer have also been taken from the GT3. 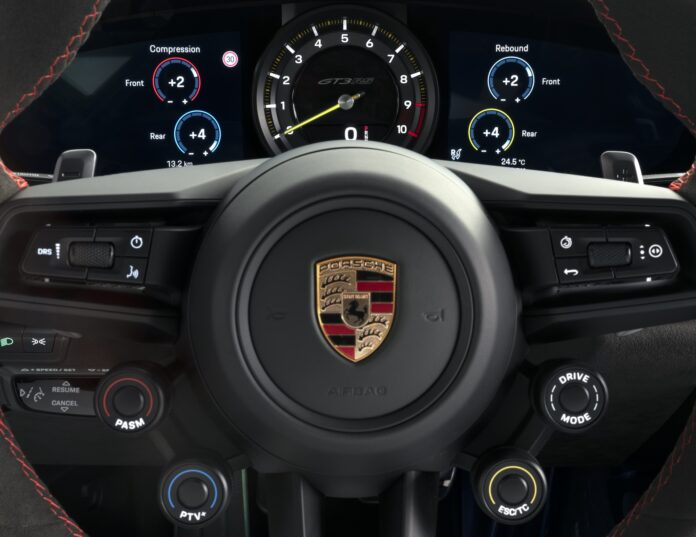 Back to the interior, aside from the bonkers steering wheel, it is the usual focused Porsche GT interior. The 911 GT3 RS is available with the Clubsport package at no extra cost. This includes a steel rollover bar, a hand-held fire extinguisher and six-point seat belts for the driver. The Weissach package, which is available at extra cost, involves considerably more. The front lid, roof, parts of the rear wing and the upper shell of the exterior mirrors feature a carbon-weave finish. The front and rear anti-roll bars, the rear coupling rods and the shear panel on the rear axle are made of CFRP and contribute to a further enhancement of the driving dynamics. The rollover bar, constructed for the first time from CFRP, saves around six kilograms compared with the steel version. Another high-light of the Weissach package is the PDK shift paddles with motorsport-derived magnet technology. This makes gear changes even more dynamic thanks to a more precise pressure point and a clearly perceptible click. Optionally available with the Weissach package are magnesium forged wheels, which save another eight kilograms.

If you were to be the first owner of a GT3 RS of any generation, it is almost a given that the car will immediately be worth 50% or more on the used market given how limited allocations often are. Without the Weissach package, the car will be offered to buyers for €229,517 in Germany. Expect them all to be reserved and allocated by the time you have read this… 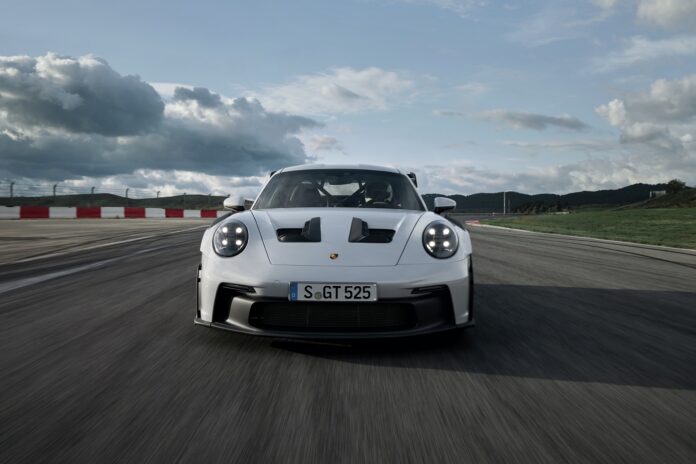