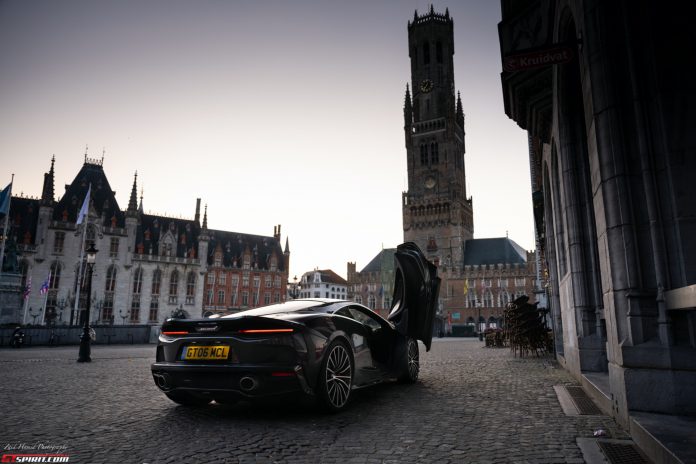 ‘I’m sorry, I know it’s a Saturday, but I’ve been called into work. I’ll see you tonight if I can escape. If you can, please could you pick up cheese bread and chocolate. Everything will be closed before I’m back. I know we had plans today but I’ll make it up to you! Xx’

This really is how my weekend began. Empty bed, thwarted plans and no chocolate to drown my sorrows with. There was, however, a silver lining to be exploited – I had the keys to a McLaren GT, rather than crawling through Mayfair traffic before posing aimlessly outside Novikov, I could cancel my, now redundant, lunch reservation and do what the McLaren GT was designed to do – pick up bread, cheese and chocolate. The local Daylesford Farm Store and Wholefoods were too close to justify driving and did not present a tantalising driving experience. My partner’s insatiable workaholism was only matched by her equally unhealthy appetite for chocolate and all things sweet. It was still early, what if…

90 minutes later I’m approaching the warmly familiar check in booths at the Folkestone end of the now ironically named Eurotunnel. Why? Well, why settle for anything less than the best of chocolates when I could stretch the legs of the McLaren and bag the best chocolates anywhere in world to sweeten the mood of my horrendously overworked and under appreciated lady friend – as win win scenarios go, I can think of few better.

The Eurotunnel Terminal presents well known surroundings, this feeling continues as I recite my algebraic coffee order to the tired, eye bag plagued Starbucks barista that soullessly wishes me a safe journey. I respond to her well-wishes with ‘I’m only popping over to get some chocolate’. I imagine she feels that she is dreaming and/or delirious. I nonchalantly head back out to duck under the GT’s dihedral door before sinking into the leather and alcantara cocoon. The only smell better than warm caffeine may well be the surroundings in which I am drinking it in.

Passport checked, ‘random’ drugs test completed (they really just wanted to nose around the GT), I held my breath as the wheels of the McLaren rhythmically trundled over the metal carriage breaks just centimetres away from a gut wrenching scrape against the train’s metal curbs. My perfected imitation of a dog with its head out of the window ensures the safety of the very smart diamond cut wheels. Coffee emptied and MPH swapped to KM/H, it was time to see how good a cruiser the GT really was. 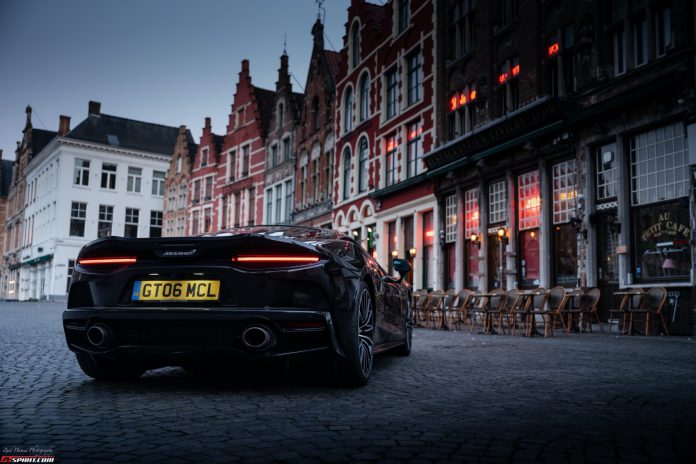 The French darkness shrouded the autoroutes and invited the GT to stretch its legs. This is a car that presents credentials that are unusual in a McLaren, but one which maintains a crucial McLaren: being ferociously fast. Ignore the 0-100km/h time of 3.2 seconds, that might seem quick, but the acceleration when you’re up and running is what really boggles the mind. In second or third gear, anything about 4,000rpm is as fast as you would expect any McLaren to be. In my mind, the performance is not where this car needs to make a point, it is every other measurable GT element that needs to shine.

This journey is not my first in the GT, I drove the car on the press launch that was set on the French Riviera. It is all too easy to get caught up in the romance of the scenario, the weather and the fabulous roads. This drive to Bruges would emulate something far more realistic, less fabricated and very varied. I had already crawled through London, felt the ride on harsh concrete British motorways leading to the English Channel and was now floating over the billiard table smooth Autoroute. France comes to end in a snoozy blink, Belgium is up next and the surface worsens. With the ‘Active’ panel engaged and handling and powertrain modes both is comfort, the ride is supple and the engine quiet, murmuring at 1,200 rpm. On a 130km/h cruise this 327km/h McLaren sips just 8l/100km (30mpg), that being said, the 72 litre fuel tank means stops are more frequent than you would hope for continent swallowing GT car. Then again, getting out to look at the car every couple of hours is no bad thing.

The reception from fellow road users, petrol station attendants and generally, anyone you pass in the car, is exceptional. Perhaps it is that it does not scream, ‘LOOK AT ME’ like an 720S or carbon clad 600LT, until you open the doors at least, but comments of the elegance and maturity of the design are plenty.

Creeping into Bruges minutes before sunrise presents the perfect opportunity to enjoy the iconic sights of the Markt Square void of the teams of tourists that are attracted by the medieval architecture and the charm of the waterways that snake in-between. Finished in Black Ingot, this is the most subdued McLaren I have piloted. The paint appears to be a rather boring black, but park it in any light, sunlight or artificial street light, and the car glistens as if coated in glitter. McLaren are unrivalled in their creativity and sparkle offered in their paint options. As the sun peeks between the turrets and spires, the complexity of the shapes that forms the body panels of the GT are highlighted. It is dramatic, but in a different way.

Enough of the architecture, I was here for a purpose. As the sun rose, the quaint shop shutters did too, the smell of fresh bread lingered in the crisp morning air. Bruges is awash with chocolatiers, all of which boast they are the best in Belgium, and therefore the world. Chocolates bagged, cheese soon followed – mission accomplished, with time to spare. A chocolate and banana waffle, two coffees and a nap in the McLaren later, it was time to crawl out of the perilously narrow car park and back to the Eurotunnel. By mid-morning all but one of the roads in the UNESCO World Heritage Site remains open to traffic to allow cars in and out of this car park. The pedestrian is king in the daylight, my cue to leave.

Upon arrival to Bruges, I felt fine with no backache or considerable fatigue. The beauty of a true GT is the absence of tiredness on a long journey, such as this. En route to Calais I begin to feel a little tired, my body was beginning to feel uncomfortable in the ‘Comfort Seats’. The noise of the V8 started to intrude and I felt the need to pull into the services to take a break. It must be said, this feeling of weariness came after 10 hours into my adventure and chances are I would have felt agitated driving a Rolls-Royce at this point, but the McLaren was taking more of a toll on my body than a Bentley Continental GT would have. A massage seat wouldn’t have gone amiss either. It is creature comforts where the McLaren lacks. It is, indeed, a McLaren and the purpose of it is to be very fast, something it does fantastically. With that in mind, the absence of massage seats, Apple Car Play and self parking capabilities are not as crucial as they would be in other cars.

It is when you write a list of missing options that it becomes clear that many GT car buyers, that are not so hellbent on going supercar fast, may start to look elsewhere. Yes, I can live without active cruise control, lane keeping assist and blind spot assist – but it is nice to know that you do have them helping you out on a long drive. You can relax and be a little fresher when you arrive at your favourite mountain pass or coastal road.

Boarding the train back to the UK gives me another chance to reflect and relish another quick nap. This is a GT car, it can do journeys like the one I was about to complete, but it will do it in its own McLaren style. It will get you to your favourite road with a boot full of luggage, then challenge you and blow your mind when you unleash its turbocharged fury. Buyers of a McLaren GT will treasure that high adrenaline, intense offering that no other GT car can offer. They will also know that there are more comfortable GTs on the market. This is the drivers GT and the tradeoff is obvious, it is unashamedly McLaren and for that I cannot help but admire it. 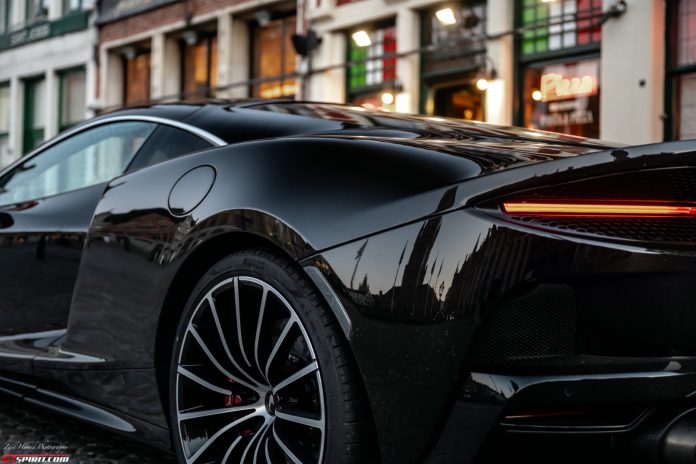