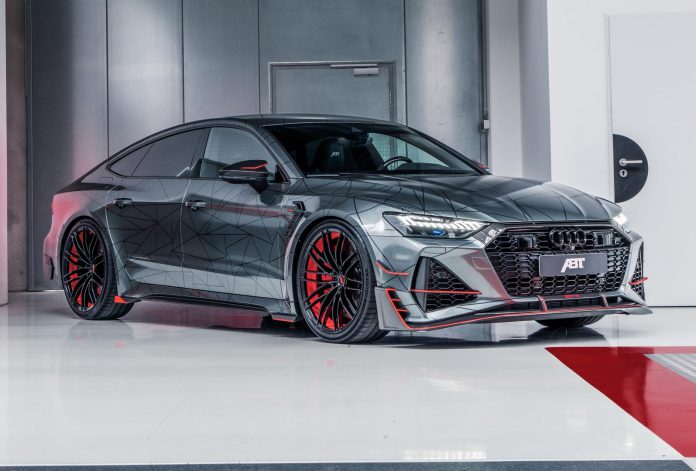 ABT has finally turned its attention to the RS7 Sportback. The ABT RS7-R turns the RS7 into a monster sports sedan thanks to a healthy boost in performance, additional carbon fibre body parts and a unique wrap.

The ABT RS7-R is limited to just 125 copies. At the heart of the package is a power boost. The ABT Power R package boosts output from 600 hp and 800 Nm of torque, up to 740 hp and 920 Nm of torque. There is little explanation as to how the boost is achieved but it should be reassuring to learn that the improvements come with a 2-year guarantee.

The suspension also receives a set of modifications. Customers have two options. A set of ABT coilover suspension springs can be specced with a height-adjustable front (5 – 25 mm) and rear axle (5 – 30 mm). A set of sports anti-roll bars are also on offer constructed from high-tensile steel with forged ends.

The ABT front grille frame add-on and front lip add-on are new. These combine with an ABT rear spoiler and rear skirt add-on. Further optional extras such as an extended interior package or the optionally available 22-inch ABT HR Aero wheels can be found in the ABT Configurator.

The example in the photos belongs to Daniel Abt, the founder’s son and current Formula E drive. It’s called the ALLTHEWAYABT RS7-R, adorned with a special orange-coloured design. They combine with a painted set of brake callipers and a set of 22-inch HR wheels which are options for any other RS7-R.

Inside, ABT are able to offer a complete set of interior enhancements with ABT leather and carbon fibre available for the steering wheel. This ABT RS7-R also gets a new seat set.

Of course, if you want something a little less subtle, ABT also offer a 700 hp upgrade.