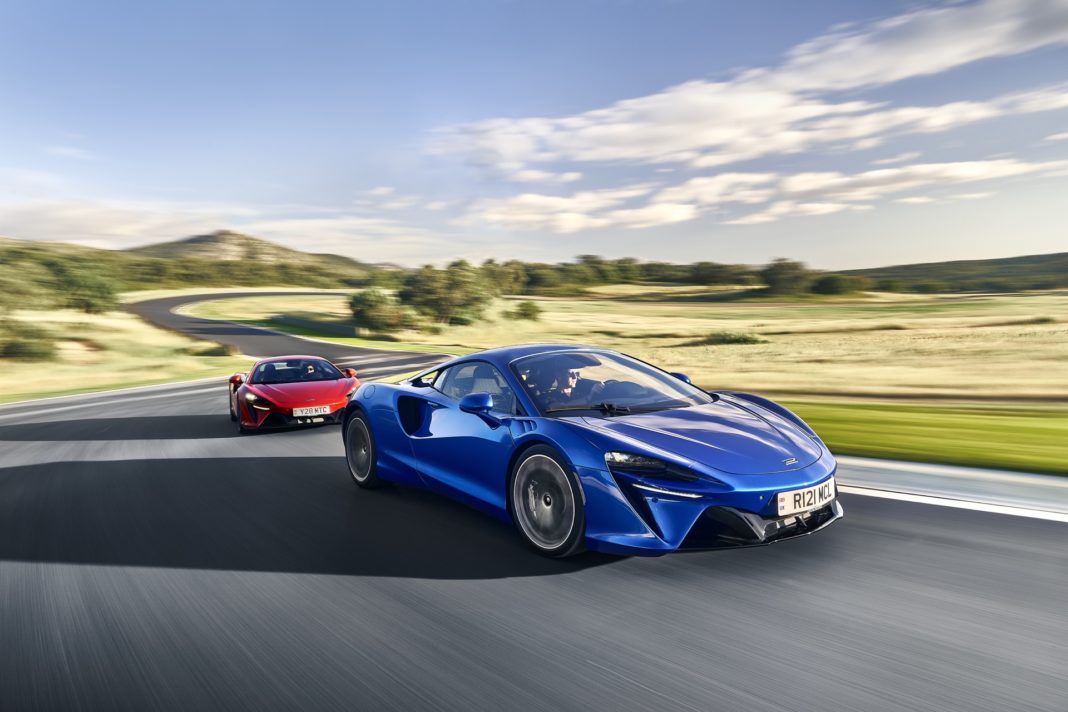 It’s finally here, having officially been unveiled well over a year ago, it is time to drive the 2022 McLaren Artura, McLaren’s first-ever series-production High-Performance Hybrid (HPH) supercar. The British brand stated that the Artura is a distillation of more than half-a-century of McLaren’s expertise and experience in race- and road-car engineering and that it blends thrilling performance, driving dynamics and engagement with EV driving capability, I would soon find out for myself if that was the case on the roads around Ronda, Spain before unleashing all the power of Artura on track at the Ascari Race Resort. However, before I tell you about that, there are a lot of facts and figures to familiarise yourself with.

The 2022 McLaren Artura is powered by a 3.0L V6 twin-turbo engine that generates 585hp and 585Nm of torque. This engine is 190mm shorter, 220mm narrower and 50kg lighter in weight compared to McLaren’s 4.0L V8 twin-turbo engine. The 120 degree twin-turbocharged M630 unit delivers unmatched performance and ensures compact packaging. A 180-degree angle was considered but dismissed because it raised the centre of gravity as well as the crankshaft. The wide angle V6 cylinders allows the turbochargers to fit within the banks in a ‘hot vee’ configuration which ensures a less restrictive exhaust layout. The hybrid system is completed by an E-Motor that produces an extra 95hp and 225nm of torque, for a total of 680hp and 810nm of torque when combined with the ICE.

A 7.4kWh Five-module Lithium Ion energy dense battery pack provides an electric-only capability and is positioned low down behind the driver. The Artura has an electric range of 30km. This position optimises the centre of gravity, polar moment of inertia and also improves the dynamic agility of the car.

The Hybrid battery is fitted in a cooling manifold together with the new electric heating, air conditioning system and ventilation which are also used to control the air temperatures in the cabin. The batteries of the car are thermally controlled via dielectric oil, a technology used to maintain the E-motor at operating temperatures that delivers high performance.

The batteries take approximately 2.5hrs to charge from 0-80% when charged through EVSE socket and can never truly run out of power even when parked for a long period, the management also ensures that the battery units remain in peak conditions at all times. The battery unit comes with a warranty of years or 75,000km. An integrated power unit(IPU) acts as a DC/DC converter for the 12v system and minimises the weight.

The engine of the Artura powers only the rear wheels through an eight-speed transmission that is designed for optimised packaging, the length of the gear cluster has been reduced by 40mm.

The driver can adjust the electric motor deployment to prioritise range, power or to shut off the internal combustion engine for a silent drive. Energy harvesting is enabled from the combustion engine and the battery can be charged from low to 80% within minutes under normal driving conditions which ensures that the driver can shift to electric-only mode.

Enough of the jargon, what is that like on the road? In three words? Fabulous, exciting and different. The car starts in electric mode, a wild departure from the bassy V8 that is synonymous with every other McLaren in the line up. There is no regeneration through the brakes meaning there is no one pedal driving, just whisper quiet gliding for up to 30km at a max speed of 130km/h. The NVH in the cabin is very impressive with road noise being kept to a minimum, the Pirelli P Zero tyre even features Pirelli Noise Cancelling System tech (foam pads inside the tyre that absorb sound). There is a distant whirring sound which is the e-motor working, but this is not intrusive. 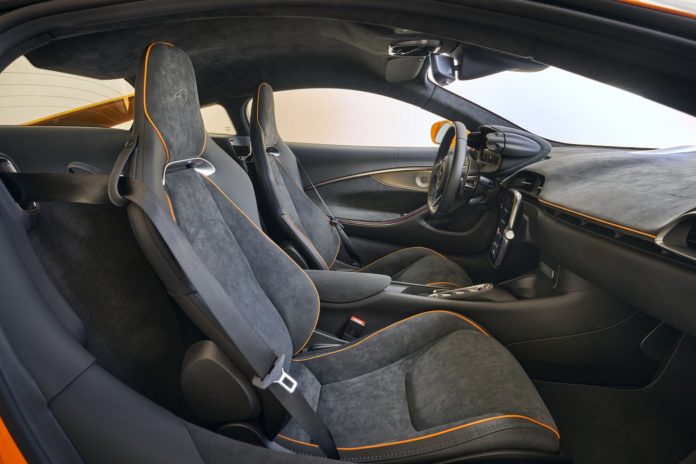 The cabin itself is clearly a big step forward from previous generations. The materials and fit and finish are far superior as is the infotainment which, finally, features Apple CarPlay and AndroidAuto. It’s not all perfect though, the native navigation system lags behind the position of the car in reality, but I suspect most will be using the aforementioned mobile apps.

Peeling off of the autostrada it no longer seemed appropriate to be causing around in all electric mode, nor comfort, the tight twists and turns called for Sport and the chance to feel the power of combustion and AC/DC in harmony and boy, the results are startling. Gone are the laggy, boosty traits of the old V8, instead there is immediate power and torque from 3,000rpm all the way up to the 8,500 redline where the V6 really sings, it might sound just as good as the old V8. The steering is still as spectacular providing brilliant feedback as McLaren that came before Artura did and the braking power is equally as impressive, the pedal still requires a mighty shove to feel the best that the ceramics have to offer. The car turns in with poise and urgency and getting on the power early to exploit the torque rewards you with a predictable and enjoyable quarter lock of oversteer. Torque fill means gearshifts are biblically fast and smooth. 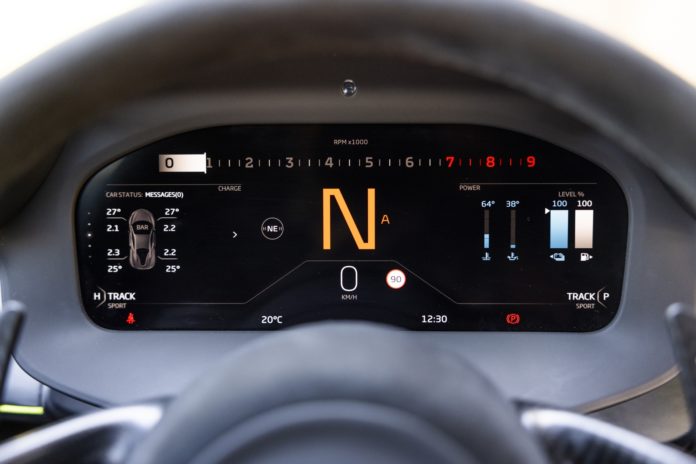 Coming out of tight turns you can be in a gear higher than you would be in an 570S and ride the surge of torque, the way the car picks up speed is remarkable with in gear acceleration feeling ferocious but at no point overwhelming for the chassis. The suspension and damping in comfort mode are as good as I’ve felt in any sport or supercar to date and really make the Artura a pleasant car to cover miles in, sport was perhaps a little too stiff for the broken Spanish asphalt. Having given put the car through its paces on the deserted mountain roads, I flicked the new mode selectors which are mounted to the instrument binnacle, into comfort which switches between electric and hybrid depending on speed and throttle position.

The final test was to explore track mode, naturally the track was the place to do this, and the chosen circuit is a good one that I have visited on a number of occasions: Ascari Race Resort. The cars here were fitted with the GT bucket seats and harnesses and Pirelli P ZERO Corsas to maximise grip. These were no ordinary Corsas, but Pirelli’s new Cybertyre, a system the wirelessly connects each tyre to the car using a bluetooth connection which generates real-time data and relays it to the car’s stability control systems to optimise tyre performance. Furthermore, these tyres produce grip levels comparable to the extreme P ZERO Trofeo R tyres of the 600LT. 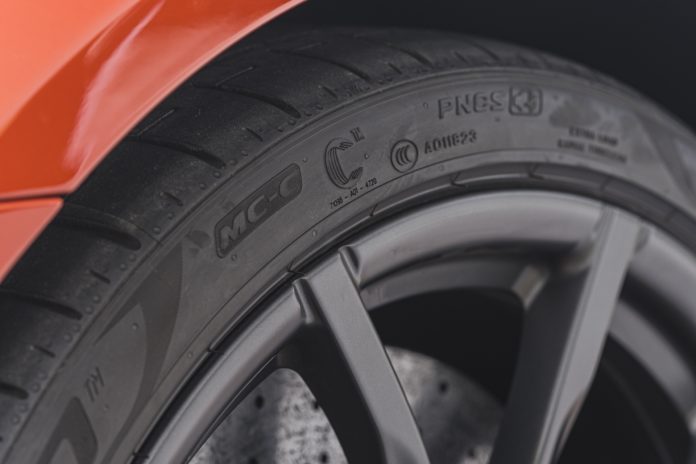 Heading out on track in Track mode means the the battery is using the engines power, when not at full throttle, to keep maximum charge before deploying it at max throttle. The speed is tenacious, yet the chassis feels composed and playful and inspires confidence, the Artura always feels like it’s on your side. The steering and brake pedal further add to the feeling of security and the feedback is marvellous. Not at any point does the 2022 McLaren Artura feel as if it is dynamically hindered by the weight of the hybrid systems, it even cloaks its kerb weight of 1,498kgs (DIN) impeccably.

Although my track experience was very enjoyable, it must be mentioned that the cars on track did suffer from a few technical glitches that did tarnish my time with Artura, that being said, these are early production cars and it is likely safe to assume that these will be ironed out come customer deliveries.

I have nothing but praise and admiration for the McLaren engineers that have managed to incorporate hybridisation in such an effective and seamless way, the Artura feels very different to any other McLaren, yet it still feels like a McLaren product with the great driver feedback and spectacular handling characteristics that allow the brand to be held in such high regard after a relatively short period of time. This is a first for McLaren, I cannot wait to see what will come next. 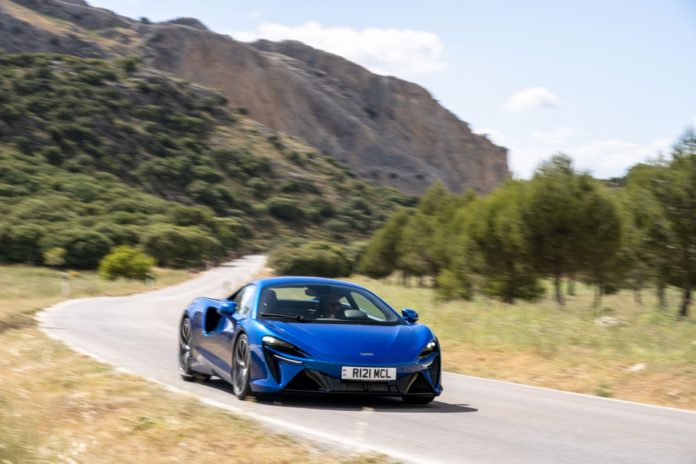