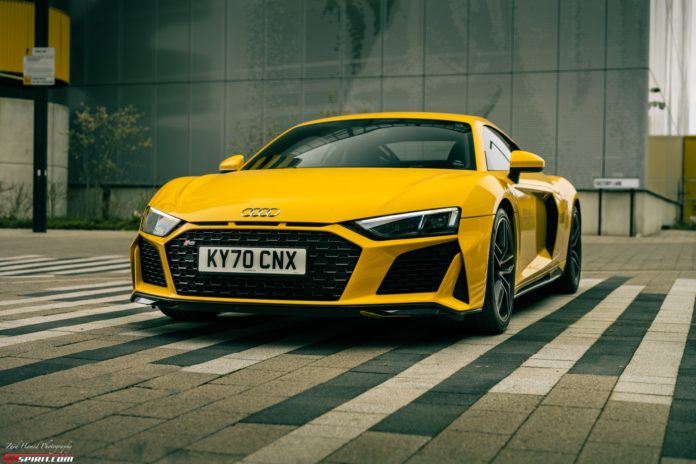 It is hard to believe that the Audi R8 is almost 15-years-old, seeing the first generation V8 on the road is still a treat – few cars have aged as well. Since its inception, the R8 has morphed from a mid-engined sports cars battling the likes of the Porsche 911 Carrera range, into a red blooded supercar with a heart shared with a Lamborghini and a price tag that makes it a very different proposition from the car Tony Stark used to daily. The current R8 range has shrunk to just three options, gone are the V8 or manual options. All powered by 5.2-litre V10 engines and available in Coupe and Spyder forms, perspective buyers can have the full fat Performance Quattro with 612bhp, the semi-skimmed 562bhp V10 Quattro or the entry level model that is the subject of this review, the V10 RWD with ‘just’ 533bhp. The difference is price between the range topper (£144,950) and the RWD (£114,435) is noteworthy and arguably makes the RWD on of the most attainable entry level supercars on the market, but does it make it any less desirable?

To me, the R8 RWD is the most compelling R8 in the current line up. The Performance variant is great, but to me it was too easy to find the limits, something I discovered just a handful of laps into my stint putting it to the test at the fearsome Ascari Race Resort in Spain in 2018. With all of the driver aids disengaged understeer would creep in earlier than expected before suddenly transitioning into snap oversteer. Admittedly, things were much better when pushing the AWD car when fitted with Cup 2 Michelins and not the PS4S.

The first impression of the 2020 R8 Rear Wheel Drive is that the front feels more immediate and communicative than the rest of the range. That being said, the numbness of the steering has not been cured, yes, you can feel a little more of the road, but there is a distinct lack of understanding of how the rubber is interacting with the surface. But let’s be realistic, this is not a Porsche GT3, the R8 is a car with a much broader appeal. Where the GT3 with its (optional) fire extinguisher, cage and harnesses is set to drive to a track day, set immense apex speeds and then drive you home, the R8 is better focused to being the daily driver that will double as the stylish supercar that will turn heads outside your favourite restaurant. There are no adjustable dampers (optional on the AWD variants) so the ride has to be as well suited to a country road as the city centre speed humps. It is well judged but it is a touch unrefined at lower speeds. Anything above 50km/h is well damped, below that it is what I would describe as ‘jiggly’. The interior is well designed and fairly spacious. Whilst the cabin still feels modern, the MMI does feel dated, CarPlay is a bonus but the entire interface does feel a generation old.

But what is it like to push on a fast flowing road? I drove the banana yellow (technically Las Vegas Yellow) RWD for 600 miles, most of which were on some of the best roads in England. Once you learn to modulate the grabby brakes and not expect to be able to feel the surface of the road you can start to find the limits of the 2020 Audi R8 Rear Wheel Drive. The experience is dominated by that mighty 5.2-litre V10 and the transmission. With a redline at 8,500 and no turbochargers in sight (woohoo!) you really have to eke out the revs. Nothing really happens before 3,000 but then things get interesting. 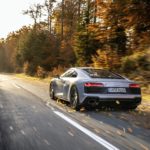 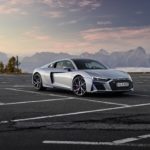 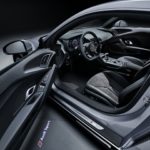 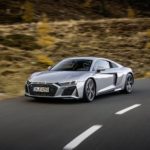 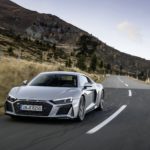 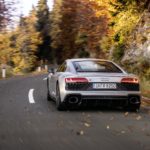 As you reach 4,000 the V10 really starts to come on song. Hang on and relish the bark of the V10 as it reaches peak torque (540Nm) at 6,400rpm and peak power all the way up at 7,900. By the time you’re at 8,500 you’ll be hurtling towards the next corner having enjoyed one of the greatest automotive symphonies in production today. As you hit the brakes (ceramics are not available on the RWD) you’ll pull on the disappointingly small and plastic downshift paddle and enjoy the yelps of the engine as the 7-speed DCT makes quick work of the shifts. When left to its own devices, the transmission is overly eager and seems to constantly be shifting, but the changes are smooth and seamless. Beware of kick down in the auto modes, the gearbox, alarmingly, likes to downshift into the redline.

The Pirelli P Zeros fitted to my test car are mighty, breaking traction is easier said than done. The traction control system is very quick to cut the power and stop any hooliganism so I was forced to set the traction control to its halfway/dynamic setting which was well judged and allowed a little freedom when really pushing on. But even with all of the systems off, this mid engined layout combined with the Pirelli rubber meant that the RWD would usually fire itself out of a corner with little to no drama unless you’ve got a very open space to let the R8 off the leash. Find some space and the R8 feels fast too, 0-100 is done in 3.1 and the 2020 R8 Rear Wheel Drive will keep going until it reaches 324km/h.

The 2020 Audi R8 Rear Wheel Drive is the cheapest R8 in the range, but it offers more excitement and entertainment than the other cars in the range. Day-to-day it is just as usable, practical and enjoyable as the all-wheel-drive models, aside from the jiggly ride. The engine is marvellous and that alone is a reason to seriously consider this car, after all, it seems this and the RWD Huracan are the only two-wheel-driven supercars armed with a V10 on sale. It may not be the most thrilling, driver focused supercar on sale today, but that does not mean that it is not a joy to jump into a drive. 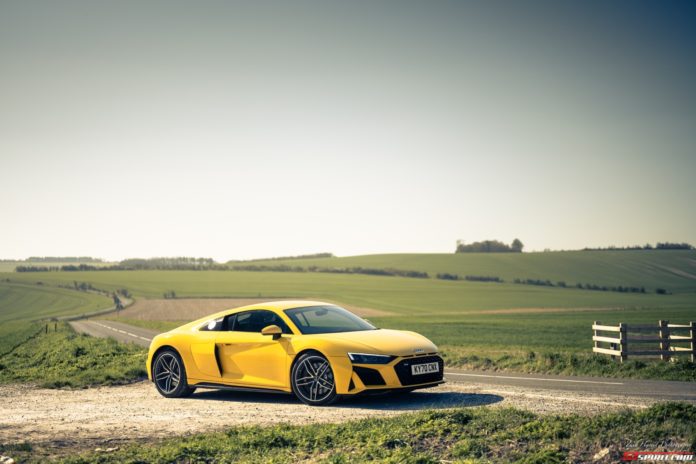