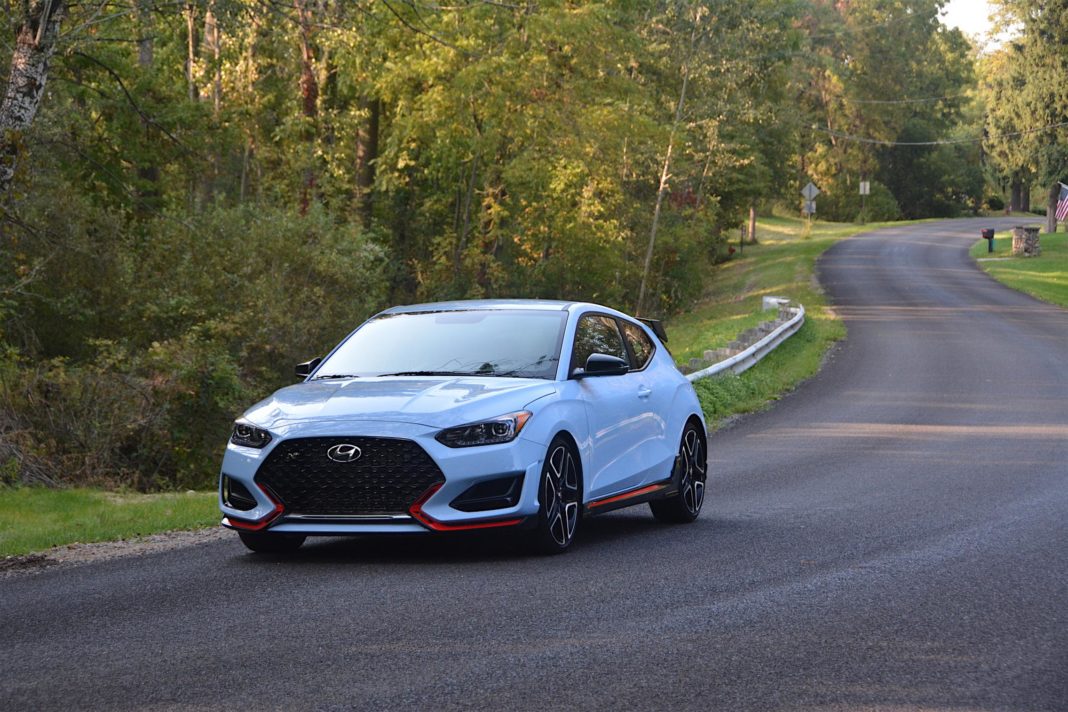 I like surprises. They tend to catch you off guard and alter your whole perception of something. For example, when I was informed that the next car to be delivered was a Hyundai Veloster, I was slightly disappointed. Not that the Veloster is a disappointing car – quite the contrary, it’s a decent little car – but I was hoping for something more…sporting. So imagine my surprise when they delivered a beautiful French blue Veloster tricked out to the gills with racy styling touches. Surprise! It looked fabulous. Paperwork described it as the N-line Veloster. The last N-line Hyundai we’d driven was the Elantra GT N, which was a surprisingly fun little hatchback that we’d driven and enjoyed a year or two ago.It hadn’t been a race-ready fire-breathing monster or anything, but a capable little car that was just eager to rev and fun to drive. So we expected some mild improvements to the Veloster and hopefully the same eagerness to run that the Elantra had. It turned out to be much more interesting that the Elantra GT N. Much more indeed.

While it’s obviously a Veloster, quite a bit of time was spent adding some visual flair to the design. It has a deeper and more aerodynamic front splitter with air deflectors and sharp contrasting red stripes through it. It looks much more menacing from the front than the standard Veloster. There’s a matching red stripe along the rockers, and then a black section of bodywork before the rear wheel arch that picks up on the backside of it and blends into the highly vented rear valence with a faux-venturi and two very large exhaust pipes. The exhaust pipes look like small culvert pipes. Only shinier. Across the rear edge of the roof is an aggressive-looking wing. All together it makes the redesigned Veloster look even more sporting and aggressive. And that blue paint – Winning Blue, according to Hyundai – set it all off quite nicely. The blue (at least to my color-challenged eyes) reminded me of the shade of French Blue that you’d find on Bugatti’s from the 1920’s. Or the Gulf Racing livery from the sixties. Very different and very unique in this day and age. Nearly everyone we encountered commented on the color and most of them loved it.

Inside, black dominated everything, broken up by the blue seat belts (front and back), and several chrome accents on the pedals, shifter, and dash controls. The seats were decently bolstered, with blue accent piping and stitching. The controls were laid out simply, making things easy to find and use. The one thing that surprised me was the lack of seat heaters but as it was in the high 70’s the whole time we had it, we didn’t need them but thought their absence was odd in this day and age. The seats were comfortable and easy to get in and out of. All the controls were smartly laid out and easy to reach. The six-speed manual shifter (!) fell easily to hand and shifted smoothly, without any kind of notchiness. The clutch was light. The steering wheel adjusted for rake and reach. It was very easy to get comfortable in. 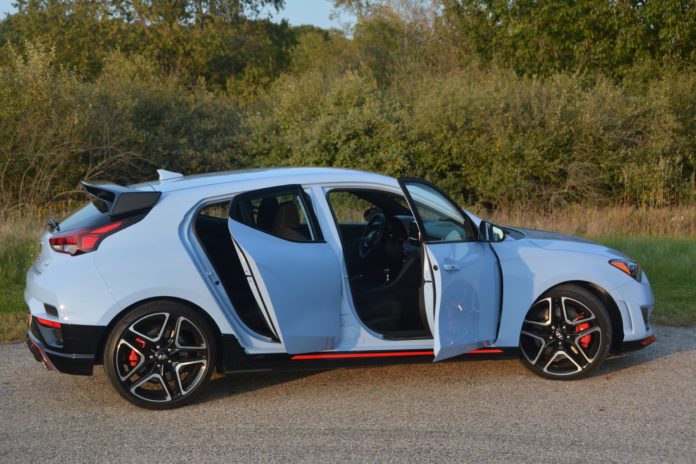 We were startled to realize that It’s actually a three-door car. There’s one door on the driver’s side, and both front and rear doors on the passenger side. An odd arrangement but it worked fine. The back hatch opened wide to swallow your cargo and with the rear seats folded down, you could fit just about anything back there – like racing wheels and a jack. It was surprisingly roomy inside.

Under the hood was a 2.0L twin-scroll turbo four-cylinder making 250 hp and 260 lb-ft of torque. It revved smoothly and redlined at nearly 7,000 rpms. A torque-vectoring system helped put that power to the road as efficiently as possible and helped it corner much better than it had any right to as front-wheel drive car.

The suspension consisted of electronically-adjustable dampers that had a few drive mode settings. A surprising but welcome addition to a $30k subcompact.

It rolled on unique 18” aluminum wheels, wrapped in Michelin Pilot SuperSport 3-season tires. Behind the wheels were 13” ventilated brake discs in front and 11.8” discs in back, clamped by bright red calipers. The brakes had some of the best modulation I’ve driven this year, and they inspired incredible confidence.

Per the N-line specifications, the N came with exclusive front seats with blue piping and better bolstering than the standard Veloster, an exclusive leather-wrapped steering wheel with French blue stitching, an exclusive gauge set with shift timing lights in the display, proximity locking and unlocking capability, and exclusive floor mats.

Our car also came with the optional $2,100 Performance Package, which substituted 19” wheels with Pirelli P-Zero tires, 13.5/12.4” brake discs, an extra 25 hp, a variable-valve exhaust system, and a Corner-Carving LSD with electronic control. Completely worth it.

So it’s a sharp looking little car with some impressive performance goodies. But how’s it drive? At least as well as the Elantra N, we hoped. Here was our next surprise. Press the start button, snick it into first gear, let off the clutch and get the Veloster N rolling. The engine is smooth and feels pretty peppy at parking lot speeds. The steering is light but not *too* light. The power assist helps out at low speeds but doesn’t interfere too much at freeway speeds. The suspension firmness is *perfect*. It feels really sporting but not harsh at all – a comfortable firmness. I wish my Miata felt this firm and exhibited such good control and bump absorption. Pull out into the traffic, lay on the throttle, and the turbo-four rockets the little hatchback up to speed. It’s certainly eager to run to redline and seems to pull harder the higher up the tachometer you go. Weave through slower traffic, squirting through gaps as they open up, shifting through the gears. This is a really fun little car! Traffic suddenly slows and the brakes rise to meet the challenge. There’s no squishiness, just bite, and the car stops as fast as you want it too. It does exactly what you ask of it and it inspires complete confidence in it’s abilities.

It also plasters a big smile across your face. I drove it every chance I got, took the long way to get places, and even made up reasons to go out and drive it. We ate up miles of freeway, drove countless backroads in search of twisting, hilly byways that we could wring the car out on. It never once disappointed nor frustrated us. And you know what? With all that driving, even on an all-day drive, we never once were uncomfortable in the seats. These have got to be some of the best seats I’ve ever spent time in. Bolstered enough to hold you in place and comfortable enough that you don’t want to get out of them. 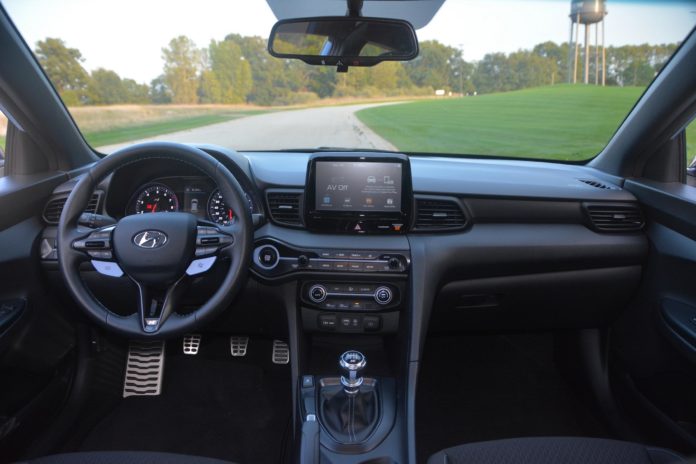 It was only after a few days of driving that we realized that there was yet another surprise waiting: We hadn’t tried “Sport” mode yet! All our fun was being had in “Normal” mode. What could await us in “Sport”? We eagerly pushed the button to find out. What did we find? Nothing less than a complete personality change. The shocks firmed up to track-level firmness. The exhaust opened up and raised it’s voice substantially. It now barked when you shifted. It snarled and popped when you let off the throttle. The steering sharpened. The engine quickened it’s responses. The body mods hinted at something like this but I didn’t really expect it to deliver. In “Sport” mode, each variable was adjustable through the infotainment screen. Whether it was the engine, the steering, the suspension, traction control, or other variable, you could select “Normal” “Sport” or “Sport+” and tune it to your preference. Truth be told, we had fun playing with “Sport” mode but it’s more ideally designed for track use. The wonderfully obnoxious exhaust note and the kidney-punching shocks were fun in short bursts on public roads but they’d more likely be at home on a road course.

The EPA says it’ll get 29 mpg on the highway and 22 mpg in the city for an average of 25 mpg. That’s pretty close to what we say too. Our heavy right foot may have brought it down a bit but it was still very economical.

The Veloster N starts at $27,400. With the addition of the Performance Package, our’s came in a cool $30,430, which is a steal for the enjoyment it’ll bring.

Mind you, this is not what we expected from a Hyundai Veloster. It was much better and we LOVED it. In fact, we were quite disappointed to have to give it back. We’d have been quite happy to slot this into our garage.