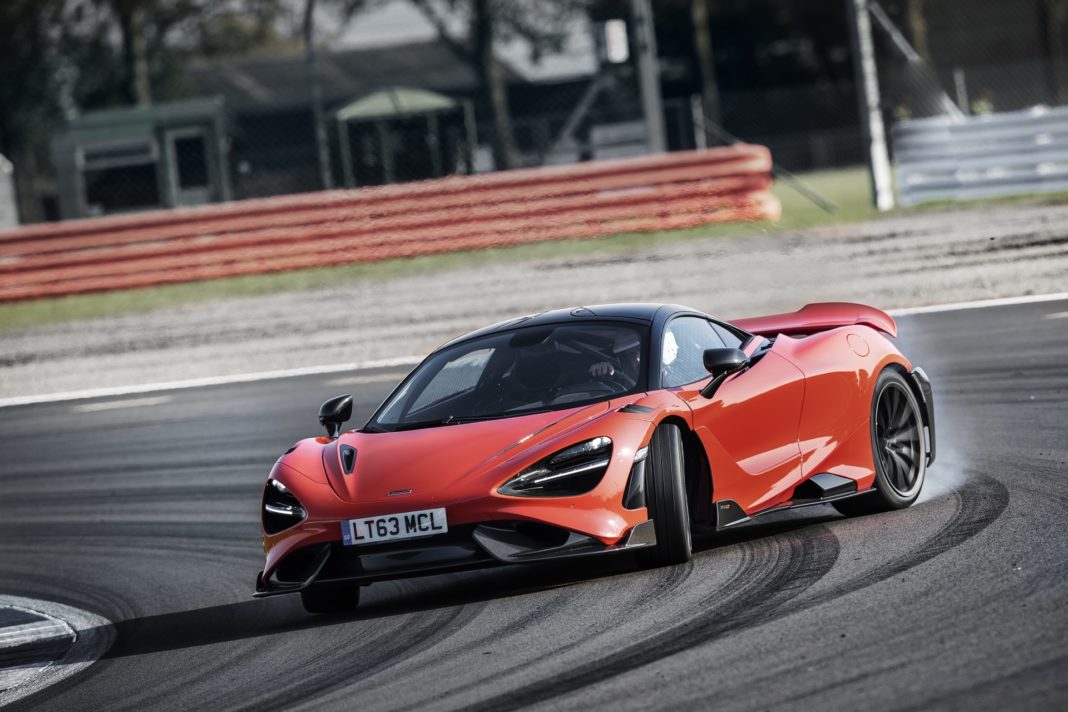 The supercar market is more crowded than ever before, manufactures seem to have an ever growing product portfolio which promise to cater for a different set of needs. The current fad appears to be hypercars without windshields which Ferrari, McLaren and Aston Martin have recently indulged in. These impractical multimillion pound cars come across as fine jewellery to me, yes, they are pretty and catch the eye, but like the Maharaja Sir Bhupindar Singh of Patiala’s ceremonial necklace featuring a whopping 1000 carats of diamond, they are not very appropriate for when you’re popping down to the local grocery store to buy a few eggs before catching up with a friend for coffee. That being said, a Ferrari Pista or Porsche GT2 RS are not exactly appropriate for a the school run, but they will happily plod along in traffic fairly inconspicuously before bringing you huge doses of fun on your favourite roads before administering shots of adrenaline on a circuit and getting you back to the school gates for in time to watch your child’s first football match, come rain or shine. For me, that is what defines a supercar – the ability to be used as a road car and then, at the touch of a button or a flick of a switch, raise the hairs on the back of your neck and have you spewing expletives when you floor it. A fantastic example of such a car is the McLaren 600LT. I drive a 600LT in relative comfort to the south coast of the UK and then let it loose on the deserted coastal roads, It was marvellous.

In 2015 McLaren unveiled the McLaren 675LT, a more hardcore take on the already exceptionally fast and capable McLaren 650S, with a track hardened approach and an added dose of fun. It is the latter characteristic that transformed the perception of the, serious, clinical brand and has made the 675LT a modern classic. The 600LT arrived in 2018 with the intention of emulating the success of the 675 at a more accessible and less intimidating level…not that 592 horsepower is exactly ‘easy’. Following the McLaren formula, the 720S has been treated to the LT treatment.

Visually the 765LT takes the elegant, clean lines of the 720S and adds scoops, cuts and wings that takes it to the levels of aggression that we have become accustomed to on LT products. Following LT tradition, weight saving was a priority during development of the LT. Advanced carbon fibre technologies and bespoke carbon fibre LT body panels and aerodynamic features are key to an 80kg (DIN) weight reduction over the 720S. 1,339 kilos is impressive and just 30 kilos more than a Senna (when specced without AC or sound system, no cost options). Notably, this is the first model to feature carbon produced in the new McLaren Composites Technology Centre (MCTC) in Yorkshire, UK.

I’ve spent a significant time behind the wheel of a 720Ss. Every time I pushed the 710 horsepower car I imagined what McLaren could do with an LT model. The 720S managed to be usable and supple, but also a tenaciously fast car that would casually monster any of its rivals without breaking a sweat – it was sublime. The LT takes the same carbon chassis and adds 45 horsepower, optional Senna front brakes and seats and a plethora of other performance enhancing changes to make this a more ferocious track beast. I headed over to Silverstone to see if McLaren had successfully applied that LT magic to to the 720 – this is the bombastic McLaren 765LT on track.

The cabin immediately feels more focused than the 720S, there are lashings of alcantara in place of leather and the Senna seats dominate the interior with their huge carbon bolsters. Harnessed in with with the roll cage in the rearview mirror, the interior matched the exterior for drama.

Trundling out of the pitbox everything felt very familiar, the gearshifts crisp low down in the rev range and the amazing feel from the hydraulically assisted steering stood out. I peeled out of the pitlane and onto the International Circuit and was pinned into my seat by the acceleration. The 720S was fast, but the acceleration further up the rev range is borderline eye-watering in the LT. The stats support my gut feeling with the benchmark acceleration statistics: 0-100km/h (62mph) in 2.8 seconds (0-60mph in 2.7 seconds) and 0-200km/h (124mph) in 7.0 seconds – the latter 0.2 seconds quicker than the original target McLaren set themselves. 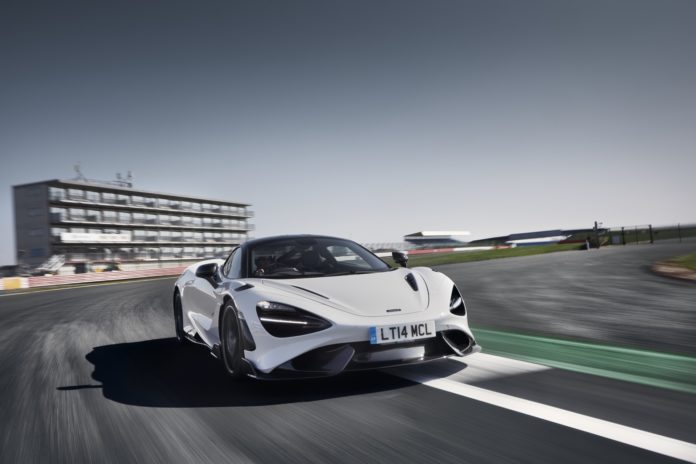 Turning into Village corner towards the Hangar Straight it immediately became apparent that the balance, poise and stiffness of the chassis remains unrivalled, as does the traction. Stamp on the mighty ceramic brakes (390mm 6-piston fronts, 380mm 4-piston rears), gently bleed them off and turn in to the apex. The front end grip was tremendous, the connection to the Trofeo Rs, specifically developed for the LT, was strong courtesy of the hydraulic steering. It’s the rear end that you have to be weary of, I felt it begin to break loose under braking and it was the one aspect that was a touch intimidating. Both on up and down shifts, the gearbox proves to be one of the most impressive and palpable improvements over the standard car. The new ‘limit downshift’ will now allow the gearbox to shift down even when it will over-rev the engine, previously requesting a downshift so high in the rev range would simply be rejected, now the engine revs are allowed to ‘bounce’ momentarily on the rev-limiter before the next gear engages. This is not only effective, but a very exciting feature to feel, hear and experience when pushing hard on track. The upshifts are ballistic too, the sensation of speed is spectacular, looking down at the speedometer on the Hangar Straight and seeing 170-180mph became the norm that morning.

It is difficult to deliver a verdict on the McLaren 765LT without driving it on the road as this is where the car will have to be enjoyable to live up to the aura and status of the 675 and 600LT. From my time on track there can be no doubt that this is a ferociously fast supercar that I suspect will leave a Pista or GT2 RS for dead on track. The 765LT brims with feel and the ceiling of its on track capabilities are far beyond those of mine as a driver. I can conclude that the power and speed are not scary, but only if you’re at you’re playing on your finest form. That being said, the chassis and brakes help instil the feeling of control. Let’s hope it is just as entertaining on the road! 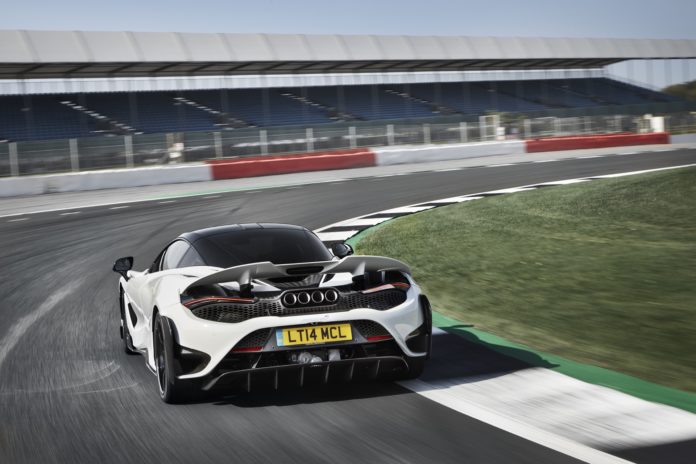