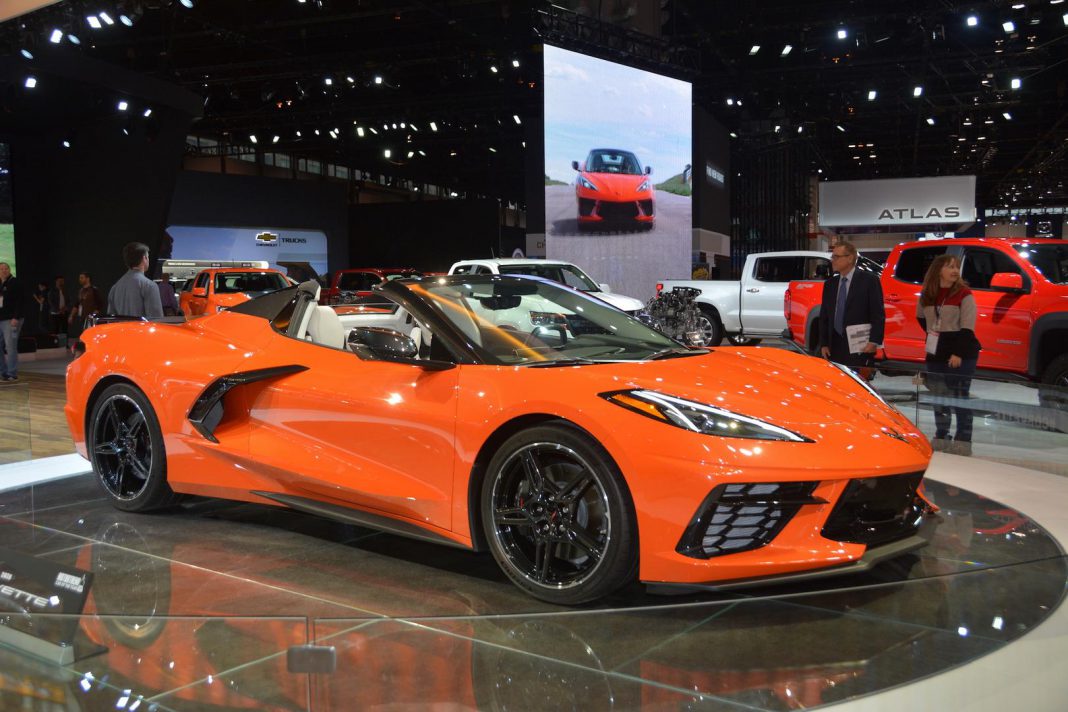 Chicago – Chevrolet brought two stunning examples of it’s new mid-engined Corvette to the 2020 Chicago Auto Show. While meant to be a primary draw at the Chevrolet display, they easily eclipsed everything within sight of the Corvette stand and lured in everyone that laid eyes on it.

Chevrolet wasn’t hesitant to let journalists sit in them either. After seeing early photos of the interior, we weren’t sure we were going to like the radical fighter plane-like cockpit. It looked tight and confining. However, once we were ensconced in the well-bolstered seats, every interior design decision suddenly made perfect sense.

Unlike a lot of mid-engined supercars, getting into the driver’s seat was easy. Simply step in with your right foot, settle into the seat and drag your left leg in. Once you’re in, you find you have plenty of elbow room and all the controls fall easily into reach. The unique square steering wheel feels remarkably natural in your hands and feels much more intuitive than you’d expect. The sensation is that of sitting in a fighter jet cockpit.

The view out the front windshield is good, with a clear view of the front fenders for getting a better sense of where the front wheels are in a corner. Through the top half of the steering wheel is a clear view of the digital instrument cluster. Cupholders are situated where a shift lever would normally be. The wraparound cowl to your right is topped with numerous buttons for the climate controls and heated/ventilated seat controls. Drive Mode controls, shifter buttons, and traction control buttons are located in front of the cupholders at the base of the sat/nav screen. It’s a very business-like environment and feels very well thought out.

There are three seats available: The standard “GT1” seat; the slightly wider, better bolstered “GT2” seats; and the narrower, even-better bolstered “Competition” seats. The Sebring Orange convertible had the mid-range GT2 seats, which were comfortable and supportive. The Rapid Blue one had the Competition seats and they were a tighter fit, but more supportive and allowed less movement, exactly as you’d want in a competitive event.

Getting out the car, which is usually the hard part, was as easy as getting into it. Supporting that opinion, we watched several elderly enthusiasts and owners get in and out without any issues.

On the passenger side of the car, everything is as spacious and comfortable as the driver’s side, but the driver’s wraparound cowl pushes into the passenger space a little and leaves you feeling a little like an afterthought. You very quickly realize that the new Corvette is focused on the driver, which is exciting.

With all the thought that went into the interior, we’re encouraged that as much thought went into the other parts of the car. The mid-engined C8 is the fulfillment of original Corvette chief engineer Zora Arkus-Duntov’s vision for what America’s sports car could be. It should be an exciting car to drive and we’re hoping for that opportunity later this year.