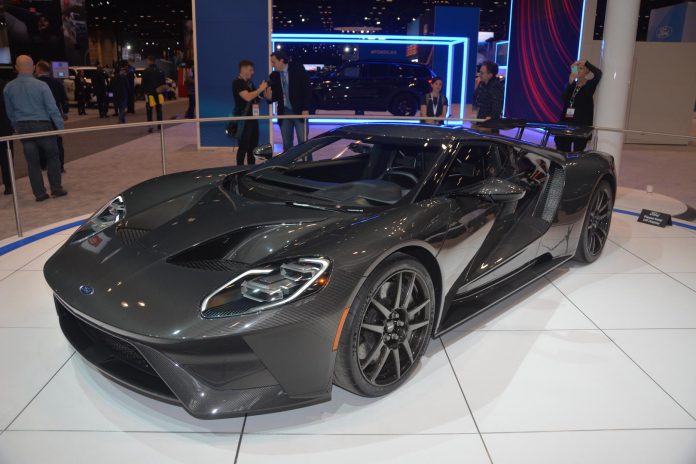 Chicago – Following their invitation-only unveiling of the exposed carbon fiber GT supercar, Ford rolled it out onto the floor of the Chicago Auto Show to give everyone a better look. Still as stunning as it was when unveiled, the brighter spotlights highlighted the intricate carbon fiber weave and made it even better. The look, known as “Liquid Carbon”, is one of two new available decorative schemes, the other being an updated Gulf Racing Livery with the number “6” rather than the number “9” to acknowledge the other LeMans winning GT-40. The Liquid Silver exposed carbon fiber appearance will be limited to 12 cars per year as a result of the handbuilt effort that has to go into it, getting the weave to line up and match everywhere.

The 2020 GT features several engine improvements carried over from Ford’s GT Mk II program. New aerodynamics increase airflow through the intercoolers by 50%, allowing them to run much longer at peak power, and engine updates and modifications that broaden the torque curve, making it more responsive. These changes increase the horsepower level by 13hp to a total of 660hp.

Suspension changes increase body control during dynamic transitional changes when the car is in Dynamic mode.