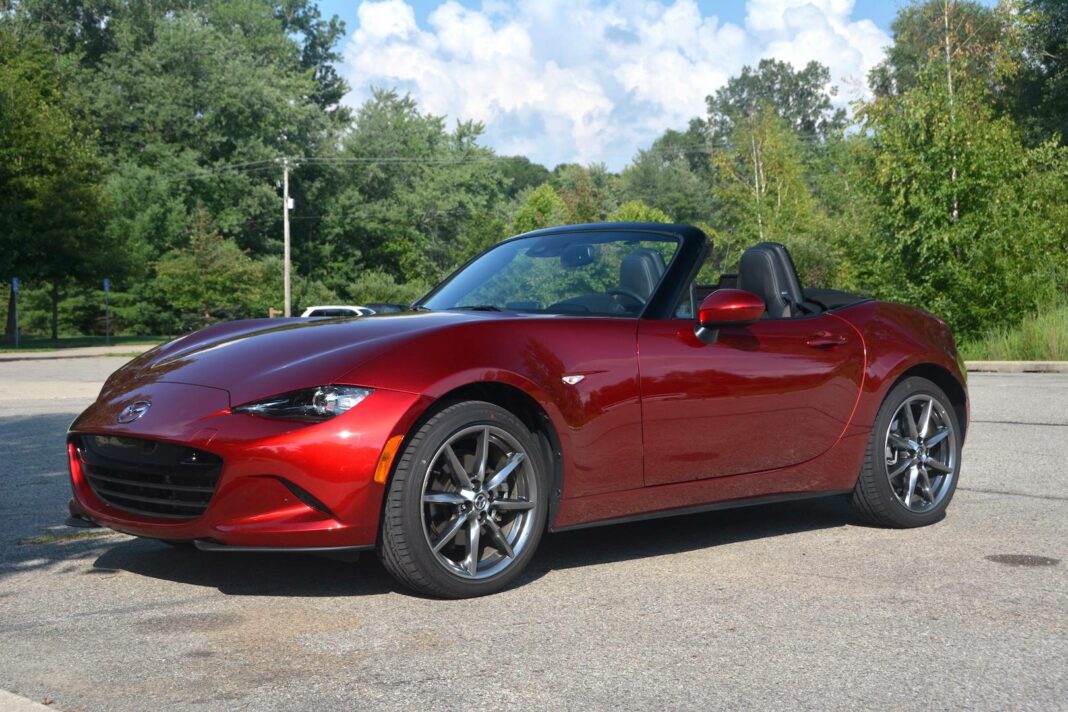 I bought my first Mazda MX-5 Miata 21 years ago this month. It was a used two year-old second-generation model with a manual transmission and Bilstein shocks. I’ve driven over 200,000 miles in it – some mere commuting miles, others cross-country vacation miles, and many, many backroad and track miles. I’ve owned a few others over the years, but my favorite is still that first 1999 model. Climbing into it feels like coming home for me – it’s comfortable, it’s familiar, and it’s incredibly satisfying to drive. I have no intention of ever getting rid of it but after driving this 2022 Grand Touring model, it presents a dilemma because the current model is SOOO good that I find myself wanting one. Desperately.

First, and most obviously, look at that paint. They call it “Soul Red Crystal Metallic” and it’s gorgeous. In the sun, it literally glows and looks inches deep. Draped over the lithe, flowing lines of the car’s body, it highlights all the design cues and gives the impression that it’s a much more expensive car than it is. It’s really only about $33,000 but many people expected it to cost twice that.

The interior is a massive step up from earlier MX-5 interiors. The leather seats are supportive and comfortable, the interior leather and plastics are high quality, the A/C reliably and strongly blows cold without dragging on the engine, and all the controls are intuitive and easy to reach. The door sills are still elbow high (for taller people). The shifter is still one of the best (if not THE best) on the market. The steering wheel feels good in the hand and the steering ratio is intuitive and exactly what you’d want it to feel like. And the heated seats that I’ve waited years for are now available and they’re fantastically effective.

Driving it is a revelation, even if you’ve spent time in other MX-5’s. It’s such a smooth and natural car to drive that you’ll wonder why other, more expensive cars don’t feel as natural to drive. This doesn’t happen by accident. Mazda claims that it spends a lot of time and effort to make the MX-5 feel like an extension of your body and the proof is in the drive.

It’s quick, too. Much quicker than my old car. “This thing is a ROCKET!” my wife exclaimed the first time I planted the throttle and wound out a couple gears. It’s true. The MX-5 weights little more than 2300 lbs (roughly what my ’99 weighs), yet boasts 180 hp (opposed to my 140 hp) so the power-to-weight ratio is excellent.

The clutch is light, the gearbox shifter is direct and mechanical, and the steering is direct, firm, and intuitive. It feels like an extension of your body.

The ride is firm but not harsh. In all honesty, it’s a little on the softer side of firm. There’s more lean than you’d expect in corners, but it’s not floaty or sloppy. It just more accommodating of bad roads and it’s designed not to wear you out on longer ones. Push a little harder in corners and you’ll find that the Miata Magic (TM) is not only still there, but it’s more fine tuned than ever before. The suspension communicates what’s going on like few cars I’ve ever driven. On a wet road in a rainstorm you can feel when you’ve reached the knife edge limit of adhesion. You can feel through your butt and your hands and your feet that if you push just another mile or two faster, the tires are going to slide. It’s amazingly communicative.

In my ’99, I’ve always loved that I can drop down to 45 mph, throw the top up and latch both latches with relative ease. Likewise, I can drop the top at 45 mph or less by simply unlatching both latches and throwing the top back. This model requires even less effort – the spring-loaded top pops up from from behind the rear bulkhead so you can get your hand under it, it easily pulls up into position and only requires ONE latch to lock it into place. It’s perfect.

And the more I drove the 2022 model, the more I found myself thinking that maybe – just maybe – it’s time to update my ride to the new model. Which makes me feel a little guilty because my ’99 has been a loyal, reliable car for so long. But the current model is SO GOOD that all my arguments against it amounted to “I don’t want to give up my old car quite yet.” It’s an old friend at this point. The A/C doesn’t work anymore. I’m having to repair it more frequently. It’s not as comfortable or as capable or as quick as the new car. But I’ve spent so many miles driving with a grin on my face in it that I can’t fathom ever giving it up. But when I do, it’s either because an accident took it out or because a new MX-5 Miata finally won me over.