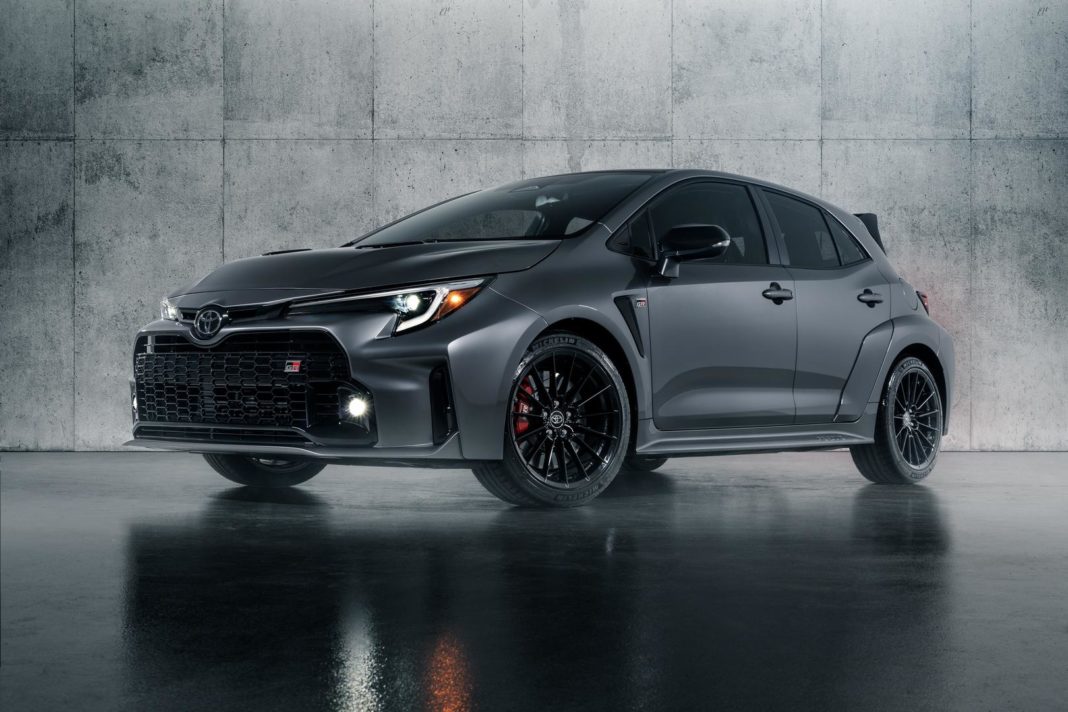 This is the new Toyota GR Corolla. JDM hot hatch for the people, manual transmission only and a GR Yaris engine tuned to 300hp just like we predicted a few days ago. Think of it as a bigger, more powerful GR Yaris. So wide it looks like it came out of a SEMA Show. 40mm wider than regular Corolla Sport at the front and 60mm wider at the rear…wow

Even the triple exit exhaust isn’t out of place, the outlets on the fenders and hood ducts are proper JDM style. The phatness has to be emphasized, that thickness looks offensively good. Toyota Gazoo Racing did a thing.

No fancy drift mode, they retained a traditional hand brake for that…and with a possible 30:70 power split that should be fun, lots of fun.

North American markets confirmed so far, expect a few more markets to follow. Pricing should be in the same range as the outgoing STI, somewhere between $35k – $40k. Golf R and the 4 cylinder Supra start at $43k so we don’t expect it to go beyond that.

If your market doesn’t get one, you probably have the GR Yaris already and Toyota will keep building those as long as demand keeps on pumping. One of the main reasons why the GR Yaris didn’t go to the US and North America in general was – the US market isn’t a place for tiny cars, this market single handedly made SUVs the staple food of the global car market. Americans don’t like hatches but that has been changing in recent years since hatchbacks are getting so big enough to rival sub compact crossover SUVs.

Toyota is serious, Gazoo Racing is on full offense mode and the best part is they don’t give two bird poops about the Germans.

Exclusively with a 6 speed manual which is a gift by today’s world standards, Toyota decided to go the Subaru route with permanent all wheel drive, same one on the GR Yaris, it’s a super evolved version of the 90s GT-Four system from the Celicas. This one is intelligent and allows you to create drift mode manually. Normal mode gives 60:40 power split front:rear, for track days use 50:50 power split mode which gives the best handling and lastly the tail happy mode which splits the power 30:70 front:rear to give you drift mode.

Unlike some GR Yaris that come with mechanical LSD, the GR Corolla is equipped with Torsen LSD only, Torsen gives good balance for road and track use. The GR Corolla is tailored for spirited driving which includes mountain roads, twisties, autocross and more. The 6 speed manual comes with auto rev-matching feature just like Civic Type R, current owners of the Type R will likely find this to be quite pleasant to drive. I have always said the Type R is in a class of its own when it comes to hatch fun, the GR Corolla will be a worthy rival.

There is another group of people who will love the new GR Yaris, STI owners. One of the biggest reasons I love my STI is the steering feel, nothing beats that hydraulic analog feel. The GR Corolla comes with an electric unit (like Yaris) but if it’s anything like the GR Yaris then this will induce smiles for days. I will put this way, the GR Corolla is a worthy successor to the STI, it could have been worse.

Remember the analysis we did about the STI’s future? By the looks of it a few things might come true.

Look at the design, mighty good as we keep saying. GR Corolla Circuit Edition even comes with a forged carbon roof alongside a hood with a massive boner attached to it, Toyota calls it a “bulge hood”. There are two air ducts on the roof as well, Toyota says Circuit Edition is limited but I’m sure this hood will be available from their store in future as an upgradable component on the Core Edition.

The Core Edition doesn’t have a boner hood or a forged carbon roof, if Toyota doesn’t offer this hood then tuners will offer it for sure just like BMW tuners offered an aftermarket GTS hood on the regular M4. The Core Edition comes with an aluminum hood like Subaru STI spec C cars. Worth noting forged carbon is 2 times lighter than aluminum, which is why Toyota uses that option on the range topping trim.

The rear bumper gets air ducts too on both trims, but the Core Edition (entry trim) has a smaller rear spoiler while the Circuit Edition gets a bigger spoiler. Much like the A45 vs A45 with AMG Aero Pack. Although unlike the German, even in its base form the Toyota still looks aggressive separating itself from the base Corolla Sport model.

The shifter comes with an inbuilt adapter to facilitate short quick throws. The interior is looking good too, and doesn’t seem to copy foreign cars. You have everything you need just like in the GR Yaris. Heated seats and steering wheel are optional, so is the JBL audio system with 8 speakers. GR badges and some red trims to give you a reminder that this is indeed a Gazoo Racing car.