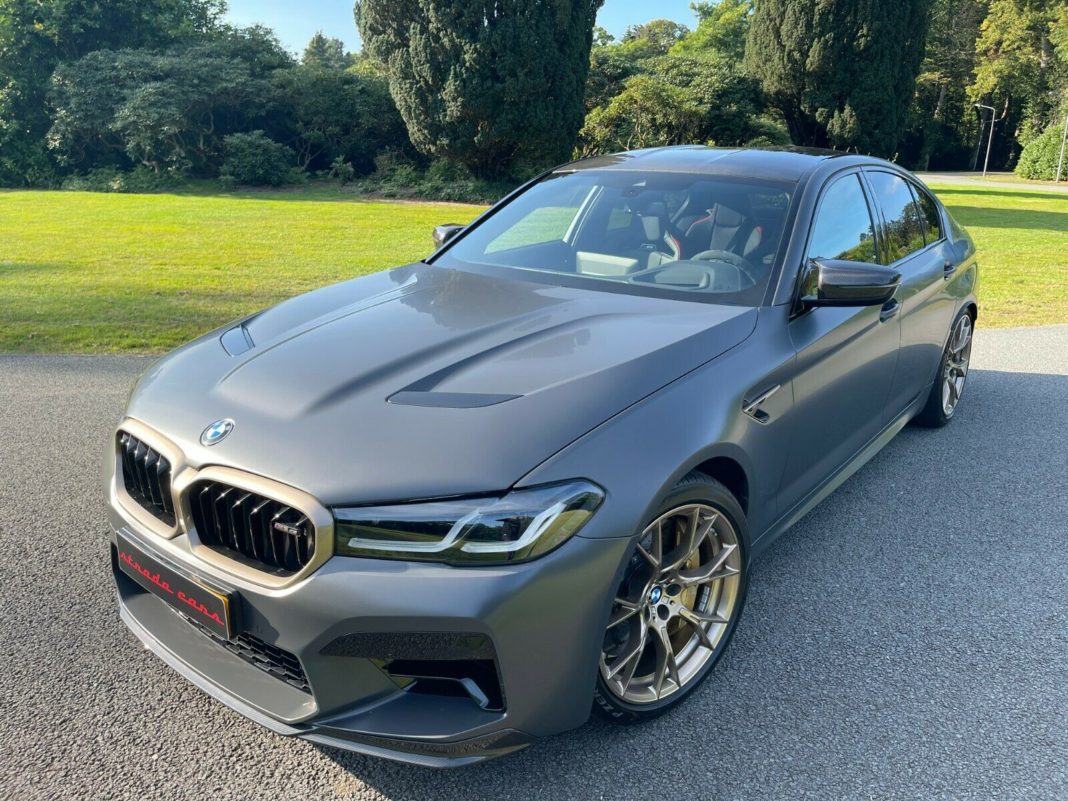 Most extreme family sedan on the market right now. The BMW M5 CS.

CS stood for Coupe Sports back when 2 door Coupes were still a thing, like the BMW E9. Recently however, BMW has used the badge on both 2 door and 4 door sports cars including the M2, M3 and M4. Today, it stands for Competition Sports and there is no model that embodies that spirit better than the current M5 CS.

With a starting price of a Ferrari Roma, the M5 CS is the most extreme sedan on BMW’s lineup, it’s also the most powerful BMW M car to date. Yes, the 750hp XM is still a concept. Pricing in Germany starts at 180,400 euros (50k higher than a regular M5), the car is basically fully loaded by the time you are paying that start price.

What you get is a stripped down M5, 116kg lighter than the regular model after being fed with a heavier carbon fibre diet than a SEMA JDM show car. There is a lot of bling too, BMW calls its Gold Bronze and it has been used on various trims including the kidney grille and the 20 inch Y-spoke 789 M wheels.

Then there is the most outrageous feature of them all, full bucket seats for the rear passengers. These are 2 individual seats unlike what you find on the regular M5, CS badging on the centre space and a convenient storage compartment in the centre console. Nothing fancy, remember the whole point is to save weight, the storage compartment is basically a hollow space like you would find in my Pajero mini.

And if you have bucket seats in the rear, the front is no exemption. Driver and passenger get the full carbon fibre experience with two bucket seats as well, there is a Nurburgring silhouette on the headrests while an illuminated M5 CS badge completes the overall show off.

Matt gold brake callipers means the car was optioned with the massive carbon ceramic brakes, 400mm (F) and 396mm (R) These are standard/no cost options although buyers can opt for the regular steel brakes. You are probably wondering why, but even BMW states that CCBs can get quite noisy esp when used for long or in wet conditions.

There are only 2 colors to choose from, BMW Individual Frozen Brands Hatch Grey metallic like our car here and Frozen Deep Green metallic.

Laser lights are standard here too, the blue hue in the headlights indicates the presence of laser light technology. These can illuminate as far as 650m which is more than double what you get in the most advanced LED headlights like Mercedes’ Multibeam LED or Audi Matrix LEDs. Audi’s laser headlights can do 600m which is also double the distance of their LEDs.

Underneath that aggressive and vented carbon fibre hood lies a 4.4L V8 twin-turbo that has been tuned to produce 35hp more than the regular M5. Output is rated at 635hp and 750nm, top speed is now 305km/h thanks to the M Driver’s Package which raises the top speed from the limited 250km/h. The M5 CS can do 0-100km/h in just 2.98s, that’s Aventador acceleration league.

Power is sent to all wheels via a ZF 8 Speed auto gearbox, there is a clever xDrive system that behaves like Land Cruiser’s 4×4 system without the heavy artillery of the LC, it enables the M5 to switch between AWD and RWD via a button. The platform is RWD based.

The M5 CS is limited by production time, what that means is that instead of limiting it to numbers BMW will produce it during a specific period. Production is expected to end in 2022 after which we will know the exact numbers that were sold.