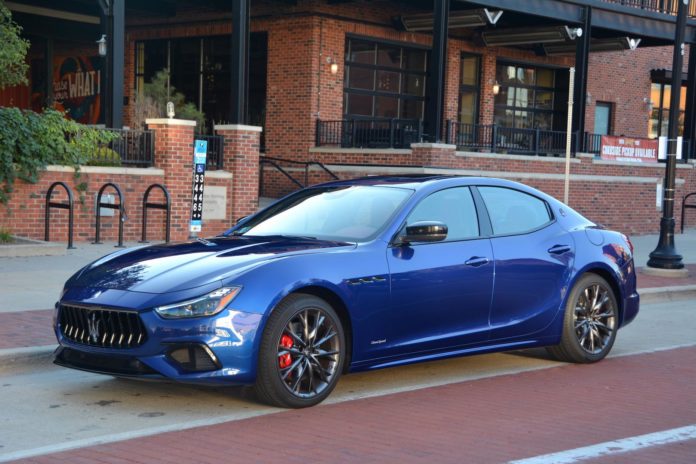 The hit song “Life’s Been Good To Me (So Far)” by Joe Walsh is probably the extent of the average American’s understanding of Maserati. It’s doubtful the average American could pick a Maserati out of a line-up but they’re familiar with the name and the name has become associated with “rare, fast automobile” over the years. Which is true, though they’re getting more common on American streets. At the time Joe wrote his song, there was only one, maybe two Maserati models. Today they offer five models: The Ghibli, the Quattroporte, the Levante, and the Gran Turismo coupe and convertible. Next year the upcoming sports model MC20 will further round out their growing line-up.

Maserati recently offered us some seat time in their newest model, the Ghibli, and we – of course – took them up on their offer. It’s a Maserati, for crying out loud. You don’t turn down a Maserati. Ever. They delivered to us a striking Ghibli S Q4 GranSport in Emozione Blue. I speak a little Maserati, so please allow me to translate for you. The Ghibli is the model, the S means it’s of the sporting persuasion, the Q4 is the designation for their AWD system, and the GranSport is the trim level of the Ghibli S Q4 – the top trim level in fact. Emozione Blue is the absolutely stunning shade of bright blue that it came in, which is a nice change of pace from the blacks, whites, and grays they typically come in.

The body of the car is undeniably Italian. It looks muscular and dressed in a tailor-cut suit all at once. The standard Maserati styling cues are present: the Trident grille, the Trident badge on the hood, the engine heat vents on the flanks, and the muscular rear haunches. I think it looks terrific and a lot of people agreed with me because they told me so.

The interior is even nicer. Red leather seats and dash accents color-block the otherwise black interior with aluminum and carbon fiber bits accentuating everything. Wait, you’re saying, red seats in a blue car? That sounds hideous. It’s not though. It really works, probably due to the red being a nicely muted shade. A lot of people commented on how surprised they were that it worked that well and not one person said they disliked it.

Under the hood is Maserati’s twin-turbo 3.0L V6, which makes 424 hp and 428 lb-ft of torque. Not quite the excitement that the Ferrari-built 3.4L TT engine generates but that’s not available in the Ghibli. Yet. Nonetheless, it makes all the right noises, snarling and growling and popping on deceleration, and when the boost comes on at around 2500 rpms it rockets the Ghibli up the road like you’d expect of a Maserati. We thoroughly enjoyed the boost coming on and the push back into the seat and experienced a lot of it. Uh, for purely professional reasons of course. 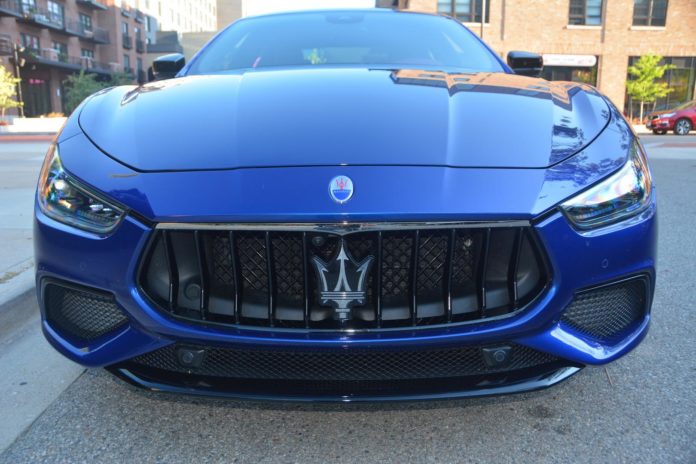 Hooked to the engine is an 8-speed transmission with large, serious-looking aluminum paddle shifters behind the steering wheel. You can drive the car as either an automatic or a manual through use of the paddles. Unlike most systems out there, these manual shifts are immediate and precise, providing delightful shifting fun during performance driving. The Italians do this manual shifting thing better than anyone.

As great as the engine is, we encountered one issue that caused us some mild consternation. Below the point when the boost kicks in, there didn’t seem to be any power from the V6. For example, when starting off and waiting to turn through oncoming traffic, we let the car start rolling forward, then as a break in traffic came, we gave it a little throttle to make the turn. But the response was so weak that we had to give it a little more throttle and just as we did, the boost would hit all at once, catapulting us through the turn and ruining our attempt at smooth and composed driving. A 3.0L V6, even pre-boost, should provide decent power down low in the rev range, so were surprised to get such a minuscule amount of power in response to our throttle actuation. We’re wondering if the electronic throttle programming was mis-calibrated or the throttle position sensor was an issue. We asked Maserati and they were surprised to hear about it and concerned enough to look into it so we’re guessing it’s not a common issue. Mind you, it only happened in the sub-boost rev range. Everywhere else, it was fine and once the boost came on, you tended to try to stay in it.

The Q4 AWD system is essentially invisible, as a good AWD system should be. In normal operation, it’s largely a rear-wheel drive car that send up to 25% of it’s power to the front wheels when accelerating or cornering. If it wasn’t for the little icon in the dash that shows how much is going which axle, we’d never have been able to tell. Nicely invisible but reassuring. 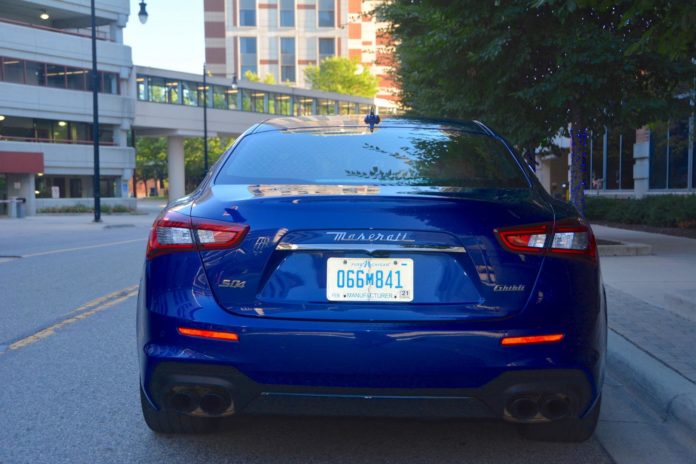 The suspension is Maserati’s Skyhook suspension system which is electronically controllable. Press the “Sport” or the suspension button and the shocks firm up for increased body control and handling. Sadly, unlike the Levante Trofeo we drove last year, there is no “Corsa” button but “Sport” definitely improves the ride and there’s a distinct personality change from luxury to sport when you press the button. Steering is direct and intuitive. There’s no awkward lack of feel or vagueness about it.

The brakes consist of massive drilled and ventilated disks and enormous Brembo calipers with “Maserati” printed on them. They stop the heavy-ish car better than they have any right to and pedal feel is fabulous. There is no sponginess or dead travel anywhere. You can easily modulate the pressure of the clamping caliper and the car stops quickly from even stupid speeds.

Inside, those red seats are incredibly comfortable to sit in for long periods of time. They’re both heated and ventilated, with electric adjustments for just about every height and leg length. The rear seats have limited leg room but are also heated. Our car came with the upgraded Pieno Fiore leather, which I’d recommend. It felt and smelt wonderful. On the center console next to the electronic shifter are a series of button that alter the car’s behavior: Traction Control Off, Auto-Start Off, I.C.E. for stability in weather, Sport, and Suspension. Below those are two knobs to control the infotainment system. On the center stack are manual HVAC controls and above that the large touchscreen. Radio, phone, and cruise controls are all located on the steering wheel. The gauges are, surprisingly, not digital but analog. They’re easy to read but they can be obscured by the small steering wheel. 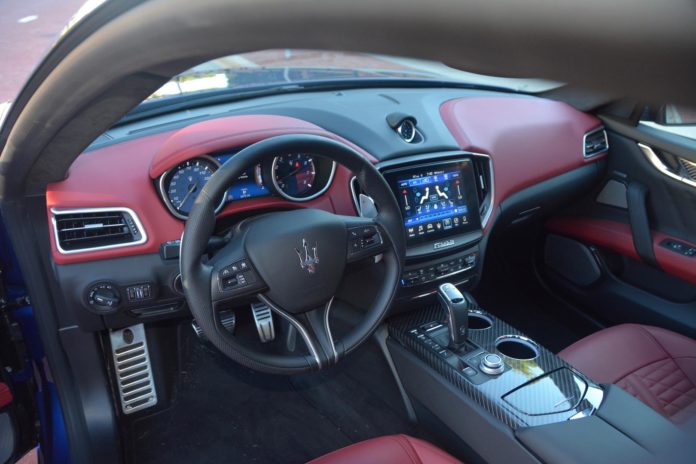 Fasten your seatbelt, push the red Start button and the V6 fires to life, snarling and growling. This ain’t no Toyota or GM V6. Pull the trigger on the electronic shifter and pull it back until “D” lights up on the dash and you’re off. Just that simple. Inside, the car is quiet. Wind and tire noise aren’t an issue. You can still make out the growling exhaust quietly burbling away back there and it sounds good. The ride is surprisingly soft, absorbing bumps and bad pavement with ease. Nothing harsh comes through to the interior. Pressing the Suspension button or the Sport button firms up the suspension but it still feels softer than you might expect. Pressing the Sport button also opens up the valves in the exhaust and makes the engine much louder. This is not a bad thing as the engine makes wonderful noises – the kind you want to hear from an expensive Italian car.

Out on the road, speed is just a throttle-stab away. It comes on fast too. The turbos whoosh you up to illegal speeds in the blink of an eye, winding the tach needle around to it’s 6250-rpm redline. It’s right at home on main thoroughfares and freeways. It takes freeway cloverleaves easily and quickly, catapulting you around them with surprising speed and stability. It’s a blast to drive and we certainly enjoyed our time with it. On back country roads it does okay, although the relatively soft suspension keeps you from getting to cocky. We felt the suspension bottom out on a couple of dips and there’s more body movement than we like but we were also driving much, much faster than we usually do on those roads so maybe it’s just the extra speed needing a bit more suspension under it.

The average American may not know a Maserati when they see one but they certainly know when they see something special and the Ghibli got a fair amount of attention. Having “Maserati” spelled out in chrome script certainly helps. It wasn’t at all uncommon to have someone pull up close behind you at a light and lean forward to read that script. You could actually watch them mouth the name then quickly pull their cell phone out and snap a picture.

We found that besides the experience of driving a Ghibli, the next best thing was telling everyone that you were driving a Maserati. “Well, it’s time for lunch. Time to exercise the Maserati!” Or while talking to friends, “Yeah, that show is awesome. I love it. Did I mention I’m driving a Maserati this week?” Or in the elevator at work, “Second floor, please. I sure wish my Maserati had a second floor, haha!” Frankly, I think after a week of driving it, those around me were kind of glad to see it go so I’d stop namedropping it.

We came away from our time with the Ghibli S Q4 understanding that it was more of a sporting luxury car than a luxury sports car. It’s too soft to be a serious sports car, and while it was fun to throw around corners on backroads, it wasn’t where the car shined. It’s more an everyday driver and a freeway missile than it is a track-ready supercar. That may change next year when Maserati offers a Ghibli Trofeo with a Ferrari-built 590 hp 3.4L twin-turbo V8 under the hood. If the current Levante Trofeo is any indication, the suspension will be upgraded to not only handle the immense power increase but also deliver stellar handling.

The Ghibli S Q4 GranSport starts at $86,490. Ours, with a few options, stickers at a cool $98,040. While that may seem like a fair amount of money, the Ghibli feels like it should be more expensive yet. Everything about the car has a feeling of quality and substance. And it’s beautiful. Did I mention that?

Italian car builders, better than anyone, understand what effect design and emotional character have on the human psyche. We relate strongly to these traits in an inanimate object. The Ghibli certainly benefits from that. The design, the engine, the ride, the sound – it’s all undeniably Italian and it affects your emotions more than most other cars can.

Most cars we test come and go and we don’t miss them much afterwords, but a few capture our emotions while we drive them and we hate to see them go. The Ghibli S Q4 was one of those cars. I’m generally an all-out performance and experience kind of guy. I like my cars small, fast, and raw, but I found the Ghibli to be an enjoyable everyday driver and was truly disappointed to see it leave. That says something to me about Maseratis. Joe Walsh had to stop driving his, but I’ll bet he didn’t sell it either.