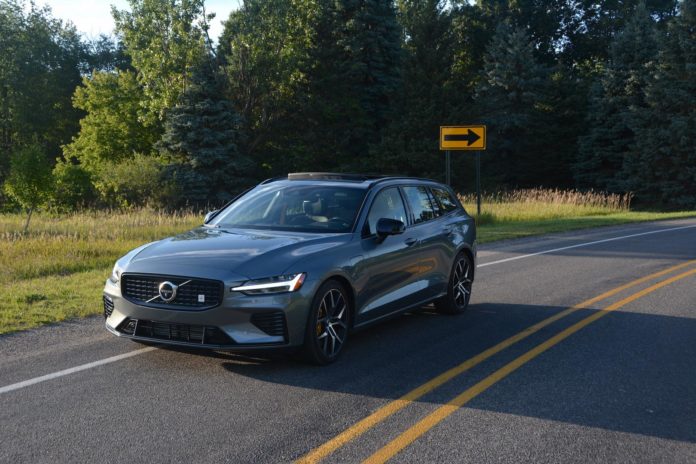 I think I’ve driven just about every model in Volvo’s current line-up and have come away impressed by every one of them. They are solid, quality cars and they hold their own in the performance category too. So when Volvo said they were sending over their latest V60 T8 E-AWD Polestar, I wasn’t disappointed to get to drive a V60 again but cynically figured it’d be a typical V60 with a few minor performance details added for marketing the car to a higher price tag.

Boy, was I wrong. The V60 T8 Polestar is a technological and performance jump over the standard V60. Much of it is down to the T8 power unit. If you’re familiar with the T6 engine, a supercharged AND turbocharged four-cylinder engine that feels like small naturally-aspirated V8 or at least large-displacement V6, it’s part of the package. The other half consists of a large battery pack and 87-hp electric motors to drive the rear wheels. It works out to the equivalent of about 415 hp and 494 lb-ft of torque, which provides plenty of oomph when you open the throttle. And yes, that does make it a hybrid as well, especially since the battery pack is a plug-in unit.

But that’s not all. The most massive brakes and calipers I’ve ever seen on a Volvo lurk behind the large attractive machined 19” wheels. The Brembo calipers are painted gold and have “Polestar Engineered” stamped on them. They also stop the car right NOW! while providing excellent feedback and intuitive control. There is no sponginess or dead feel to the pedal – just good solid pressure that allows you to interact with the brakes and works as perfectly as one can ask for.

Wrapped around those gorgeous wheels are performance summer tires to further enhance braking and handling. They grip the road like glue and hold the car solid on it’s directed trajectory.

Speaking of handling, the suspension consists of Ohlins adjustable performance shocks. Under the hood are adjustment controls on top of the shocks for dialing in the degree of damping you crave, be it buttery soft or aggressively firm. From the factory, the suspension is the right kind of firm, controlling the car’s motions and feeling solid and taut, ready for anything. It absorbs bumps and bad asphalt very well while not upsetting the car’s trajectory or performance. The steering is light but weighted just enough to give it a performance feel. It’s intuitive and isn’t affected by bumps or bad pavement. 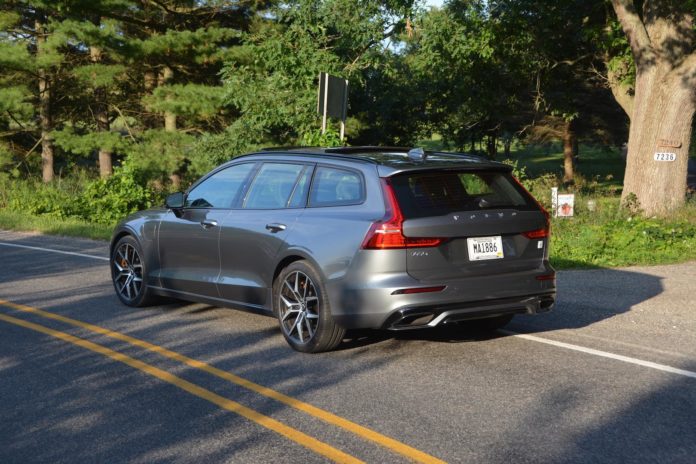 While a white Polestar badge also adorns the front grille and the rear hatch to let other Volvo owners know that you bought the best model, inside are a few tip-offs as well. Amongst the black carpeting, black leather, black plastic, and a few chrome bits, are gold seatbelts that you can’t miss. These set off the interior quite nicely and also serve to remind you that you bought something very special.

Other than that, it’s standard V60: the attractive design, the beautiful and quiet interior, the unique infotainment system that i still think is one of the best in the industry, the decent fuel-efficiency, and knowledge that Volvo still builds some of the safest cars in the world.

The plug-in system is something that can use if you want but you certainly don’t have to. If the battery for the rear wheels dies, you can simply rely on the internal combustion engine to move you along, which provides plenty of power and performance. But if you plug it in, you get the added push from the electric motors in back as well as the ability to run electrically and save fuel. Through a 120-v wall socket, it took about 7 hours to charge the battery and it provided roughly 22 miles of pure-electric driving. The natural default drive-mode is hybrid so it’ll run electrically if you’re easy on the throttle and stay off the freeways, kicking the gas engine on to provide power if you need to move quickly. The Polestar moves seamlessly between the two sources so that you never notice. Under normal daily driving, I actually didn’t have to fill the fuel tank once the entire week I had it, thanks to the electric help. And I generally drive with a heavy foot in anything that…well, okay, EVERYTHING. So fuel mileage was impressive with the hybrid system.

If you’re seeking more performance in your drive though, simply scroll the little drive-mode selector from “Normal – Hybrid” to “Polestar Engineered.” Note, there’s no “Dynamic” in the Polestar. It’s replaced by “Polestar Engineered” and there’s a definite difference. The gas engine suddenly starts and runs full-time and the electric drive system in back becomes part of the performance system, not the efficient hybrid system. It now provides power to the rear wheels and helps add additional speed and control to the drive system. It’s quick, too. Noticeably quicker than the standard V60 T6. The shocks also firm up a bit and the steering tightens and gets heavier. The responses to your inputs happen quicker. It becomes a much bolder machine. 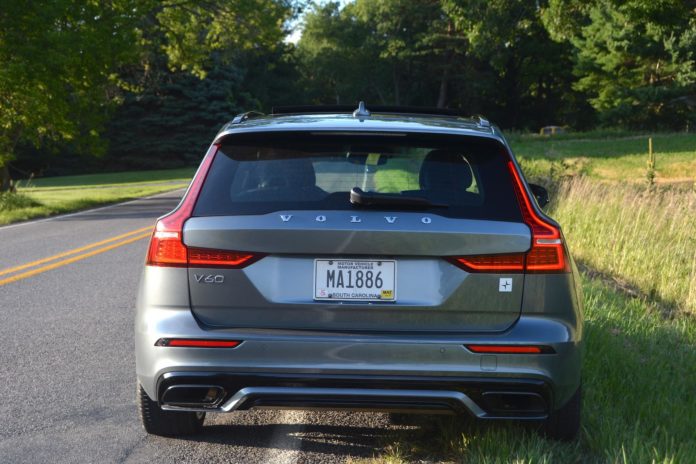 On a local series of backroads that I like to test cars on, it performed admirably, putting exceptional power down. Helping put that power down was a chassis that wasn’t upset by dips or bumps on the road and kept the car stable and balanced, even at speed that I should have been traveling. It was relatively unflappable and I really enjoyed pushing it and not being disappointed. You’ve got to love a wagon with performance credentials and I know they have a cult following amongst men worldwide.

Like other Volvos, the V60 T8 Polestar comes with paddle shifters behind the wheel to control the 8-speed transmission. While they’re adequate for the standard V60 T5 and even the V60 T6, they’re much too slow to bother with on the V60 T8. They’ll frustrate you. You’re better off letting the transmission do all the work. You’ll be much quicker and smoother and enjoy the ride that much more.

Inside the car, the driver and passengers enjoy a great deal of comfort. The leather front seats are both heated and ventilated and adjustable more ways than I could count. The rear seats are heated as well. There’s plenty of storage space in the rear (it IS a wagon – a true man’s car) and with the back seats folded down, there’s nothing on IKEA’s sales floor that won’t fit in it. The unique infotainment system still takes a few seconds longer to load than I’d like but I think it’s a fantastic system to use and it’s very intuitive. I particularly like the navigation screen that pops up between the speedometer and the tach that eliminates having to look away from the road and down at the center stack. The interior is quiet, with a minimal amount of wind and tire noise. Everything has a very high-quality, expensive feel to it that makes you feel like you made the right choice in buying this car. 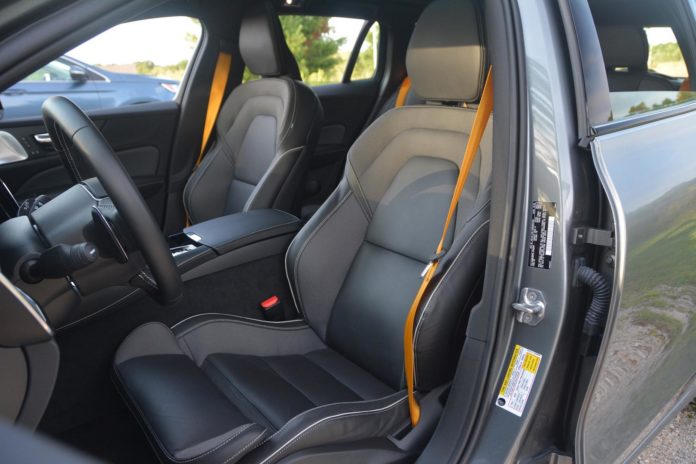 Our car stickered at $68,000. Not exactly cheap but if the adage “You get what you pay for” is true, then the Volvo is priced fairly. It’s a comfortable, well-built, practical performance car and it would be on my “must-buy” list of cars in that price range.