GTspirit
Home Car News Car Reviews Volkswagen ID.3: Should You Add One to Your Garage? 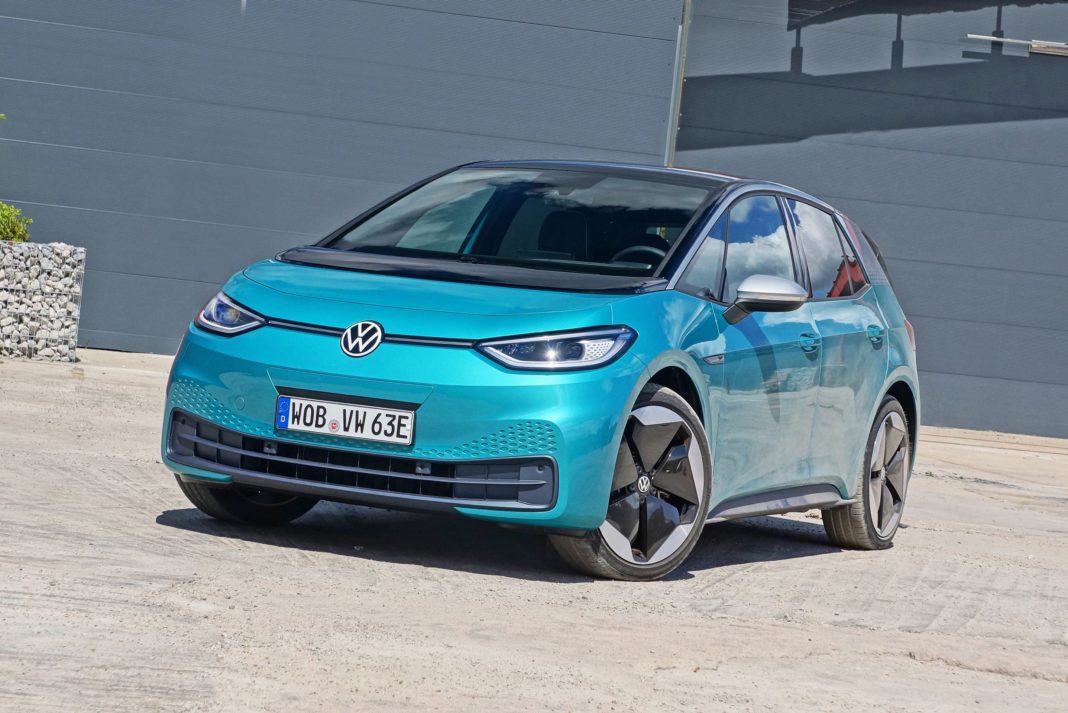 Okay, so this is a site dedicated to the upper and performance segment of the auto industry. But we are told that the future is “electric.” And while we will not go all out and replace our collection with EVs, it’s worth contemplating an electric as a second, third or fourth car. After all, some cities might go crazy and lock conventional cars out, while others already devote special lanes and parking privileges to electrics.

This week, we drove one of the most talked-about EVs: The Volkswagen ID.3, priced from around EUR 35K and somewhat immodestly dubbed a “pioneer of a new mobility era.” The name might even suggest this is VW’s third great idea, following in the footsteps of the Beetle and the Golf. A bold heritage; let’s see if the analogy holds any water.

The ID.3 is technologically significant as it is the first application of the purely electric MEB modular architecture, slated for use in a plethora of upcoming EVs – including Audi’s Q4 e-tron. Some key points are impressive: The 50:50 front/rear load distribution is ideal 50:50, and the EB platform is relatively light-weight – within the financial constraints of a car that VW hopes will be cranked out by its factories in vast numbers.

Starting out, the ID.3 will be powered by a 204-horsepower electric motor, available with a 58-kWh or a 77-kWh battery; at a later point, VW will offer a more pedestrian 146-horsepower motor. Maximum torque of the 204-hp motor is 310 Nm, transmitted to the rear wheels via a single-speed gearbox. 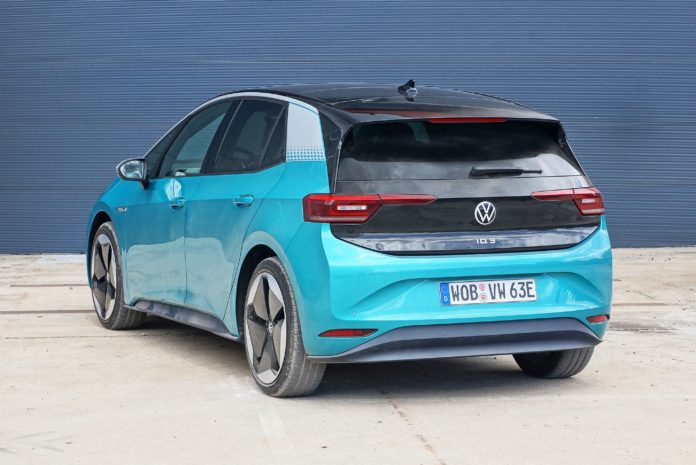 The ID.3 moves with alacrity: The sprint from 0 to 100 kph takes 7.9 seconds – or 7.3 seconds with the smaller battery. While this would have been GTI territory a few years ago, top speed is severely compromised: The ID.3 is governed at a rather pedestrian 160 kph. Take your foot off the accelerator, and the car will begin to coast; for EV buffs who prefer a “one-pedal” feeling, the recuperation rate can be vastly increased by selecting the “B” position on the gear selector.

Power delivery is instant and seamless, and the car accelerates strongly even above 130 kph. Range, of course, is the achilles heel of every electric, and the official cycle – studiously conceived by bureaucrats to make EVs look better than they are – is rated at 426 kilometers, but VW has the sense to provide a wide corridor of “customer-oriented” range, identified to stretch from 290 to 420 kilometers. Any electric car is ultra-sensitive to the driving style, and we expect real-life numbers to congregate around the lower figure. The well-insulated drivetrain remains practically inaudible, while wind and tire noise are minimal. Chassis and body are acoustically decoupled, and details such as the teardrop-shaped holes in the underbody further improve the acoustics. The sound of a pedestrian warning up to 30 km / h, an artificial whine, can really only be heard from the outside.

Steering is precise and direct, not unlike on the Golf and Passat. And thanks to the heavy battery pack, the ID.3 feels solidly planted to the road. Despite its rear-wheel drive layout, it is almost impossible to induce oversteer, and the stability control system intervenes with such rigor that it can bring the car almost to a standstill. The priorities are clear: While the longitudinal dynamics, at least in the lower speed range, approach GTI levels, Wolfsburg is playing it safe when it comes to lateral dynamics.

The damping, however, is unexpectedly hard, regardless of “Comfort” or “Sport” mode. This lack of a comfortable ride may also be a result of the thin rubber that’s mounted on 18- to 20-inch rims. Incidentally, the rear-wheel drive platform allows for a small turning circle, right between an Up and a Golf. 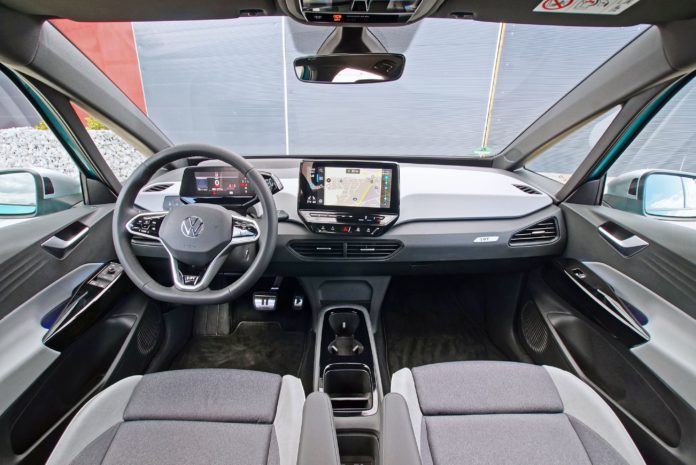 This EV comes with a number of assistance systems, identical to the Golf. The lane keeping assistant likes to play a little ping-pong between the markings and it doesn’t even pretend to allow for autonomous driving. That’s probably a far better approach than Tesla’s Autopilot, which typically gives a false sense of security right until it cuts out.

The interior is clad with high-quality surfaces materials; even the hard plastic segments don’t look cheap by any means. It’s flooded with light through the panoramic roof, the front seats offer good lateral support. The ID.3 is a practical car, with rear seat room close to the Passat’s and a decent 385-liter luggage compartment.

We found the center console to be a little too bulky, given its sole purpose is housing two cupholders; more space and legroom would have been preferable. The swiveling center armrests, on the other hand, are too narrow, and the fact that the inside mirror features a bulging plastic frame seems like a miss in this otherwise ultra-clean and futuristic interior.

The instruments are clear, logical and intuitive, and the small screen in front of the driver will swivel with the steering wheel. The gear selector is attached directly, with its labeling hidden by the wheel. The large head-up display features perfectly designed graphics, but the navigation graphics only work for short-range navigation, while long-range graphics will be added later. Unfortunately, the head-up display failed twice during our test drive, a reflection of electronic troubles we’ve had with the new Golf on another occasion. 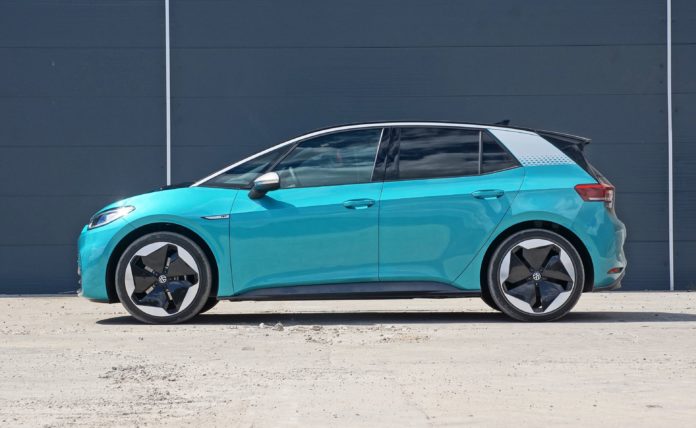 Those software components that are not yet functional will be installed by dealerships in January, Volkswagen insists. The vaunted “over-the-air” updates – which Tesla uses to correct endless bugs – will come even later. One can assume that VW doesn’t need this feature as badly as the Americans.

On its German home market, the ID.3 is priced from just above EUR 35,000, while a loaded one will come close to EUR 50,000. Depending on the market, generous subsidies might be deducted.

Incidentally, Volkswagen claims that the new ID.3 has a “better carbon footprint” than a comparable combustion engine – but only once you pass 100,000 kilometers. Meanwhile, the battery comes with a warranty of 8 years or 160,000 kilometers; up to that point, VW guarantees 70 per cent capacity.

E-mobility comes with a lot of question marks as to driving pleasure and usability, as well as the true environmental impact. But if you want an electric, the ID.3 is perhaps the most comprehensive and convincing offer yet. It’s compact and nimble, fun to toss around and easy on the eye. While we’ll keep our regular cars, we might just tempted to give it a try.