In 2014 history was written with the sale of a 1962 Ferrari GTO sold at an auction in Bonham’s Quail Auction for over $38 million. An unparalleled sum for a historic car, that raised the question if the classic car market was thriving on a fabricated bubble doomed for inevitable collapse in the near future. In present day, three years later, it appears that classics with historical significance are still worth astronomical amounts of money. Mid-August the legendary Porsche 917K is set for auction, and expected to raise around $16 million at Pebble Beach.

A whopping sum of money, but justifiably so for such a historical car. The Porsche 917K (the K standing for Kurzcheck, or rather ‘short rearend’) owes much of its fame for the 1970 and 1971 win of LeMans, and pretty ever other race around that period that the car competed in. This particular car, with chassis number 024, did not compete in those races, although it did participate in the first training sessions of LeMans in 1970 and has been raced around the Nordschleife. Despite not having been the car crossing the start/finish line to bring home gold, the Porsche does have a very prominent place in history: it was the very car used to film the renowned Hollywood movie LeMans from 1971. The car was therefore driven by Steve McQueen and has seen its fair share of screen time. On the rear-end of the car, the mounts for the cameras are still visible today.

The owner, of the heroic sports car during its role in a blockbuster movie, was the equally honoured Swiss Formula 1 driver Jo Siffert. Tragically, Siffert lost his life during the 1971 World Championship Victory Race when the suspension of his BRM gave way to mechanical failure at 257 km/h. At the funeral, the 917K lead the funeral processions with a black ribbon running over the hood of the car. After the death of Siffert the car was sold a few years later to a private French collector, who made the 917K a garage queen for 25 years. Culminating to the spectacular history of the car, the 917K remained in a forgotten location for years, until being found in a shabby garage outside Paris in 2001. In what turned out to be one of the greatest ‘barn find’ discoveries ever, the car was recovered in an identical state as when Siffert parted ways with it.

The car with chassis number 024 will however be sold with the engine of car number 021. The brute engine of the 917K 024 was returned to Porsche after the passing of Siffert, because the racing driver had only gotten the flat-12, 580 horsepower engine as a loan. For the restoration of the car and its imminent auction, the engine belonging to the 917K 021 has been bought. 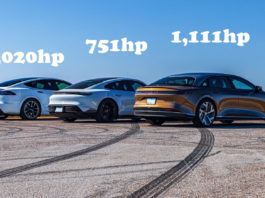