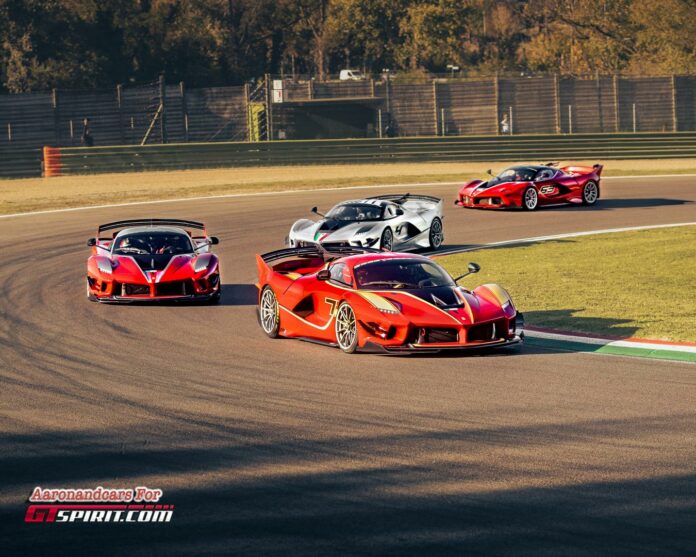 On the weekend of the 29th and 30th of October Finali Mondiali Ferrari marked the end of the Corse Clienti racing year, at least it did for the Europe, North America and the UK Ferrari Challenge Trofeo Pirelli series, as the Asia Pacific series has in contrast only completed the first four rounds of a season that ends in February.

After a few years of Finali held with closed doors, Imola’s Autodromo Internazionale Enzo and Dino Ferrari finally reopened its Grandstands of the most awaited Ferrari festival to everybody by welcoming over 30,000 Ferrari supporters arriving from all over the world.

This year the event saw many drivers who were prominent during the year battle for the season championship in each class. As per tradition, the Finali Mondiali also hosted many other activities. One of the most anticipated was the unveiling of the Ferrari 499P, the hypercar with which the Maranello manufacturer will return to the top class of the FIA WEC in 2023. Another was the first dynamic appearance of the 296 GT3, whose racing career begins in January. The big end-of-season event also featured the Ferrari Show on Sunday, along with all the XX Programme and the F1 Clienti car exhibitions.

The Finali Mondiali at Imola closed the Challenge’s 30th anniversary celebrations. In tribute to this extraordinary history that makes Ferrari’s one-make series one of the longest-running championships, all the cars that have competed over these three decades were on show in the Display Area: the 348 Challenge, F355 Challenge, 360 Challenge, F430 Challenge, 458 Challenge Evo and 488 Challenge Evo.

There were also two 488 GT3s with a special livery. One honoured the 500-plus victories while another specifically paid tribute to the one-make series’ 30th anniversary. All the cars then paraded along the track named after Enzo and Dino Ferrari. They included a 488 GT3 Evo 2020 of Risi Competizione, the car in which Davide Rigon and Daniel Serra won the GTD Pro class of the Endurance Cup in the American IMSA Championship, while the team won the laurels among the teams.

It’s has also already been announced that 2023 Ferrari Finali Mondiali will take place in October at Mugello. To date, the circuit has hosted the Maranello manufacturer’s final Corse Clienti event a record 15 times.

GTspirit is really looking forward to attend again next year!