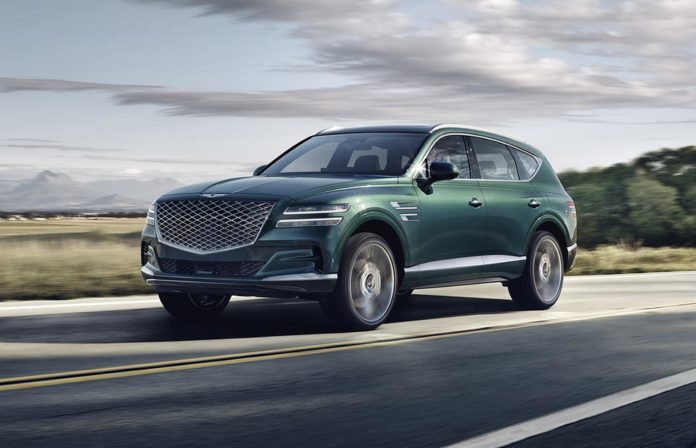 Genesis has confirmed their plan to bring a range of Korean premium luxury cars to Europe in 2021. For customers in the UK, Germany and Switzerland the sales will start in summer 2021. The Genesis brand has has been active mainly in the US where they launched a series of German-rivaling luxury cars, namely the GV80 SUV, G80 sedan and G90 full luxury sedan.

The European brand celebrated its 5th anniversary last November and has arrived in Europe with the aim of offering exceptional customer service over sales through its ‘Genesis Difference’. All the models will have one transparent price and will also be offered with a 5 year care plan with no extras. The models will be sold directly to the public through online and in Genesis Studios. The first Genesis studios will be opened in London, Munich and Zurich.

The Genesis GV80 has been said to offer similar luxury amenities to those found in a Bentley but at a cheaper price. The exterior and interior styling has been likened to that of a Bentayga. In the US, the GV80 SUV is priced from $48k, on the other hand the Bentayga prices start from $180k. Closer rivals within its price range include the Mercedes GLE which is priced from $54k. We expect the European prices to start around the €50k mark.

The five-year care plan consists of warranty, servicing, roadside assistance, courtesy car and mapping and over-the-air software. In addition, the pricing options will remain the same for each customer whether buying online or from the studios.

A Genesis personal assistant recruited from the hospitality and retail sectors will be appointed for each customer to assist and manage the aspects of the buying and ownership cycle . This new business model allows genesis to create relationships with European customers as well as ensure a convenient and transparent experience.

Orders for the Genesis G80 sedan and the Genesis GV80 SUV will open in June while the new G70 and GV70 will follow after. The fully electrified G80 will be the first all-electric luxury model to arrive in Europe after its world’s premiere at Auto Shanghai last month. In addition, two-battery electric cars will also be launched as part of product roll-out within the first year in Europe.

Genesis has developed easy-to-use digital tools including an online configurator and e-commerce platform that will operate an omnichannel approach offering direct online sales and sales across the three retail studios. The platform will also feature simplified vehicle specification and a range of subscription options from launch.

The G80 sedan and GV80 SUV have already been tuned for European roads as a commitment to the region and will be the first ones available. The models will feature a Genesis distinctive signature and design elements including the double lined Quad Lamp and Crest Grille. On the other hand, the interior of the sedan and SUV are inspired by the ‘Beauty of White space’ concept from the traditional Korean architecture. Both models meet the demands of an active and connected lifestyle through the use of a G-Matrix signature.

Both of the models have already been designed and tested on some of Europe’s toughest roads including the Nurburgring circuit with tens of thousands kilometres covered across different countries.