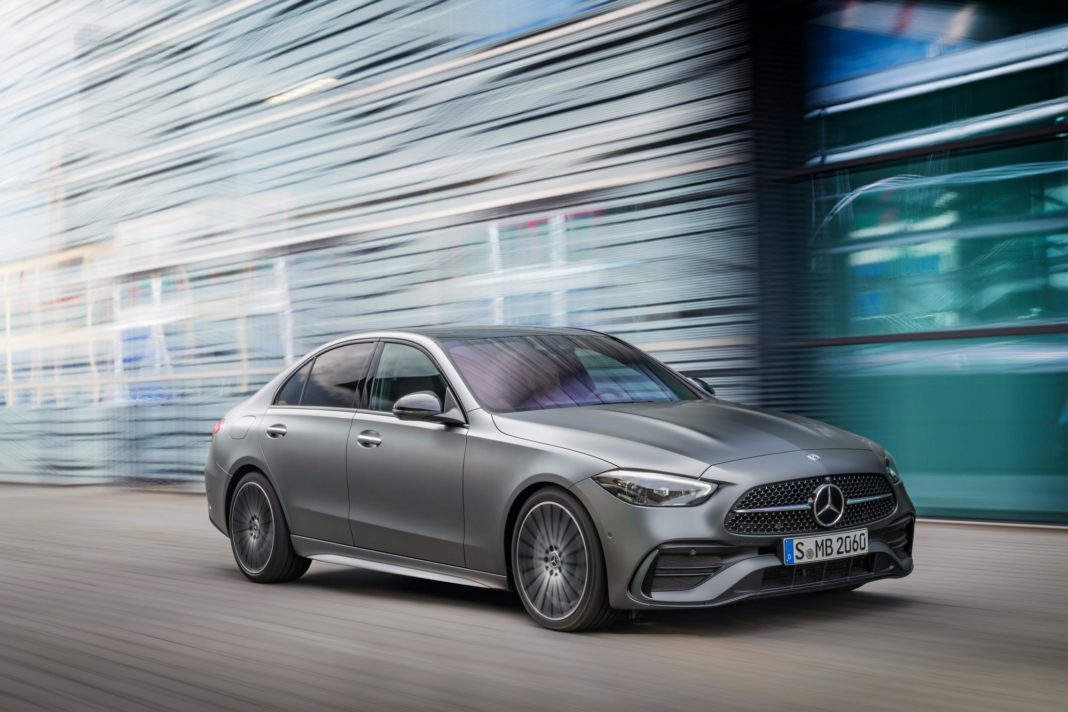 The new 2022 Mercedes-Benz C-Class saloon and Estate have officially been launched. The C-Class was the highest volume Mercedes-Benz in the last decade, since the introduction of the previous generation in 2014, more than 2.5 million units of the saloon and estate were sold. China, USA, Germany and Britain have been the largest sales market of the Mercedes C-Class Estate and Saloon Variant in the last decade.

The exterior and interior of the new C-Class have been slightly increased in dimensions, elbow room has increased by 22mm in the front and 15mm at the rear, headroom has increased by 13mm in the Saloon variant and 11mm in the Estate variant and the knee room at the rear has been increased to 35mm. The interior also features display and operating concept similar to the one on S-class and the central display and a slightly tilted central display and dashboard. The turning circle has been reduced to over 40cm under 11m with rear axle steering, this feature is optional.

Digital light with projection function is optional, the system ensures safe driving by projecting guidelines, symbols and animations on the road that indicates how close the vehicle is to objects and other cars. Voice recognition is available and can be used to control home appliances and domestic equipment using ‘Hey Mercedes’ voice assistant. Over-the-air updates feature is also available.

The rear design features similar design cues to the new S-Class while the front fascia has been twisted a bit and is unique to the C-Class.

The interior design features dashboard divided into upper and lower section, high resolution LCD screen and driver display with three display styles ( Discreet, Sporty, Classic) and three modes (Service, Navigation, assistance). The driver has a large “floating” screen in place of the traditional round dials – a choice of 10.25-inch or 12.3-inch screen. The center screen dominates the interior with a choice of 9.5 inches or a massive 11.9 inch screen.

The dashboard is covered in synthetic leather, industry standard now as activists fight to keep real leather away from regular luxury cars. The new C-Class also used the second generation of MBUX, and benefits from a new voice assistant known as “Hey Mercedes”. Over the Air updates will be standard, and just like a phone, whenever an update is available MBUX will alert you.

The new C-Class is now exclusively available with 4 cylinder engines from the FAME (Family of Modular Engines). Dubbed M254, it’s a shorted M256 straight six, favored due to the flexibility during electrification. In fact, all engine options in the new C-Class are electrified and feature either a mild hybrid 48V system or a plug-in-hybrid. The EQ boost represents an additional 20hp and 200nm torque.

The 2.0L engine found on the C300 will get an electric motor in future, to be used on later models sitting above the C300. The electric motor is rated at 129hp and 440nm of torque, and an all electric range of 100km. Depending on the driving style, the hybrid engine will choose the most effective mode for the car. In the city, it will choose an all electric mode powered by a 25.4 kWh battery that can be recharged to 100% in 30 minutes.

Pricing has not yet been announced, expect to see more models in future including the AMG variant.